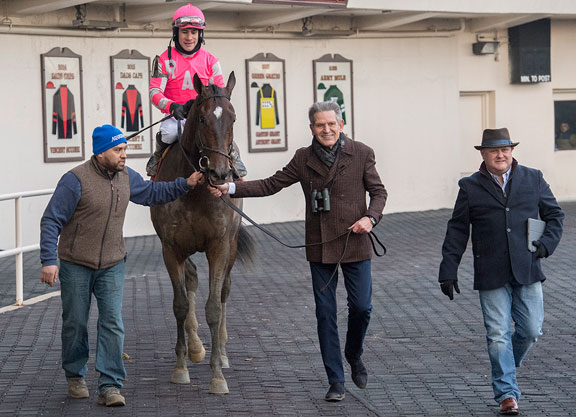 He has broken through the ranks, forcing his way into whatever gaps–however fleeting, however narrow–are incautiously left open by more established rivals. To the point that there's now no knowing how far he might go.

And that's just the horse. But much the same holds true of Danny Gargan, who claimed a gelded son of Arch at Keeneland last fall and tomorrow saddles him for the GII Wood Memorial S., presented by NYRA Bets, at Aqueduct: this squat, pugnacious figure, who has lived and worked on the back side all his life, but has been training barely five years. Because for all the blue-collar credentials they appear to share, both Gargan and Tax have an inborn eligibility for a race that could catapult them into the front rank of contenders for the Kentucky Derby itself.

Tax has no less aristocratic a pedigree than you would expect of a horse bred by Claiborne Farm and Adele B. Dilschneider. His dam, by the great broodmare sire Giant's Causeway, is out of Yell (A.P. Indy), who ran third in the GI Kentucky Oaks, herself a half-sister to Roar (Forty Niner) out of half-sister to Kentucky Derby winner Sea Hero. As Gargan says, it's just as well Tax had been cut because otherwise he would never have been running for a $50,000 tag. But Gargan's own background amply qualifies him to have turned Tax into the street-fighting winner of the GIII Withers S. in February.

Gargan was only four when his father was killed in an automobile accident. But he grew up surrounded by people who had known and respected Danny Gargan Sr., rider of the 1973 Kentucky Oaks winner Bag Of Tunes (Herbager {Fr}). People like Nick Zito, Mark Hennig and Merrill Scherer took him under their wing. Besides working for trainers, Gargan had a stint as a jockeys' agent, and was doing a little trading in young horses when P.J. Campo urged him to start up his own barn. He did so with just two horses, but within a couple of years had announced himself with the $16,000 claim Divine Miss Grey (Divine Park). Over the past two years she has earned close to $1 million, crowning her improvement last fall with a Grade II success and second-place effort in the GI Beldame S.

Gargan's barn is now up to around 40 horses, but he expects to add another 20 juveniles. There is always something of a revolving door, of course, for a trainer who has made his name in the claiming division. But Tax's graduation towards the elite could be a game-changer for the Gargan brand. If so, he will never forget weighing up this well-connected debutant, then trained by Ben Colebrook, on a simulcast from Churchill last September.

“We're always looking for young talent,” Gargan explains. “So I looked at his pedigree, and thought this looks like a horse who wants to go long on the grass. He ran a pretty good race that day, for a big horse. I didn't think he'd be a sprinter but he finished second [over 6 1/2f]. Then he popped up at Keeneland in a maiden 50, going long, and I jumped on a plane to claim him.”

It might have been a wasted journey, but Gargan came out on top in a seven-way shake. Going home, he resolved to transfer Tax to turf at Belmont or Aqueduct. “But when we breezed him, he went so good we decided to try him on the dirt,” he recalls. “His first work was okay, then I gave him Lasix for the second work and he worked tremendous.”

So much so that Tax–with a nudge from Gargan's old friend Kiaran McLaughlin–was supplemented to the GII Remsen S. for his barn debut. Tax finished third, and Gargan said that he could have been second if ridden to do so. “We were probably a little too aggressive trying to go after the winner,” he says.

At that stage, of course, the horse had barely been with him for a month and Gargan stresses his debt to Claiborne and also Colebrook for laying such a solid foundation. “He was in great shape when I got him,” he says. “You know, we're having lots of problems with young horses because they're not raised right. But this horse, his bones are amazing, he's sound; credit to Claiborne, they've bred and raised an unbelievable animal, a beautiful horse with a great dosage.”

But if Tax was a maturing young horse anyway, he evidently responded to a winter regime that sounds a little more demanding than most. “I do train my horses pretty aggressive,” Gargan concedes. “I train every day, I gallop a lot, I breeze fast when I work. Anyway, he's handled it, thrived on it. We thought we'd win the Withers. He had kind of a rough trip, he stumbled really bad at the start, then got stuck down inside. But he's a big, game horse, he's not scared of other horses, he actually relishes the competition. He got checked on heels for a minute and you're just hoping a rail opens, and finally he pushed his way through. And once he did, Junior [Alvarado] said he had a lot more horse: he was like, 'Where's my buddies?'”

That relish for action equips Tax ideally for the chaos of the Derby, not least with that deep pedigree behind him. In fact, whatever happens in the meantime, Gargan already has the GI Belmont S. in the back of his mind.

“He's bred to get the distance in these longer races,” he reasons. “It'd be awesome if we could just run one-two-three in the Wood and could go to the Derby, because he'll get the mile and a quarter and a lot of horses won't. And they're not salty like him, either. He likes to mix it up. He's a tough horse, a big, strong horse. And he's not a deep closer that needs to have it set up for him. He has tactical speed, can make the race unfold for himself. If no one shows speed, he can be speed. But he will rate.

“And he's moved forward. He's had a couple of really big works. The other day he went :47.80 just galloping in company with a nice horse, and then galloped out way in front of him in 1:01, 1:14 and change. So we expect him to be super live in the Wood.”

One of the tenets of Gargan's regime is that a horse will get more even from a :49 work in company than from blitzing :46 solo. He notes how Bob Baffert and Chad Brown like to work horses together, and when he was a young assistant to Zito they did it all the time. That's a typical glimpse of the mentoring behind Gargan, and a reminder that this is not some fellow who has just risen without trace.

“I was lucky as a kid,” he says. “I worked with some good people. A lot of people knew my dad, they liked him and liked me and wanted to help. Maybe I should have started training sooner, but you look back and I wasn't ready mentally. The jock's agent thing, that helped me. It taught me the value of a horse, and the value of winning.”

As such, Gargan's antennae are constantly flicking across the horse population. Divine Miss Grey, for instance, came to his attention just in assessing the opposition in the parade ring, when starting one of his first decent horses at Aqueduct. She looked as good as ever on her recent return and Gargan is toying with the GIII Top Flight H. next.

“I don't breeze her nearly as much as a horse like Tax,” he says. “Just at day-to-day training she's hard on herself, the hardest horse in the barn to gallop. She's a real handful. My assistant Orlando has done a tremendous job with her. She stays wherever he's at and if she goes somewhere, I send him with her. Now, Tax is a fun big old happy boy, much easier to train.”

And there's a big old happy crew around him, too, making the ride all the more enjoyable: Lucas Stritsman of Corms Racing Stable, Hugh Lynch, Dean Reeves and Randy Hill. (Hill and Stritsman are also in Divine Miss Grey.)

“Randy's a bigger-than-life type character, he brings the party,” Gargan says. “This group, they're a lot of fun. And that's what I have to try and provide as well: to make it fun. You can't disappoint people every week. They want to win, or at least to run good. So you have to run horses where they belong, and can't be scared of a claim. And you go on rooting for the horse, if you do lose one. I like being a guy people can improve off me too. As well as the guy that gets lucky and improves off somebody else, once in a while.”

Gargan isn't the only smart investor with a stake in Tax's performance. At the Keeneland November Sale, Charles Fipke bought his dam for just $50,000, in foal to a son of his sire in Blame. Gargan, grinning, pointedly remarks how he would love to train her offspring. But even if Tax reaches his limit in the Wood, there would be no sense that his trainer has yet done the same.

“People are taking notice,” Gargan admits. “I feel blessed because I've gone on the grass, the dirt, short or long. I don't know why. It's not like I do anything different, anything special. But we've some big opportunities coming: a few new clients coming aboard, more horses, better horses. Tax has helped, for sure, the phone's been ringing a little more. But I'm still going to claim horses here and there. You've got to keep fighting, keep looking, keep working at it.

“Claiming young horses, that's my thing, I think they have a chance to develop and get better. And to have Divine Miss Grey and then come back now with another one? There's guys that have been training for years haven't had that luck. So to end up with two horses like this is pretty fun. Because there's a lot of luck involved in this game. You have to do the right thing by the horses, have to be patient, but it takes a lot of luck too. And this is like a one-in-100 type horse.”