Gamine Too Tough in Ballerina 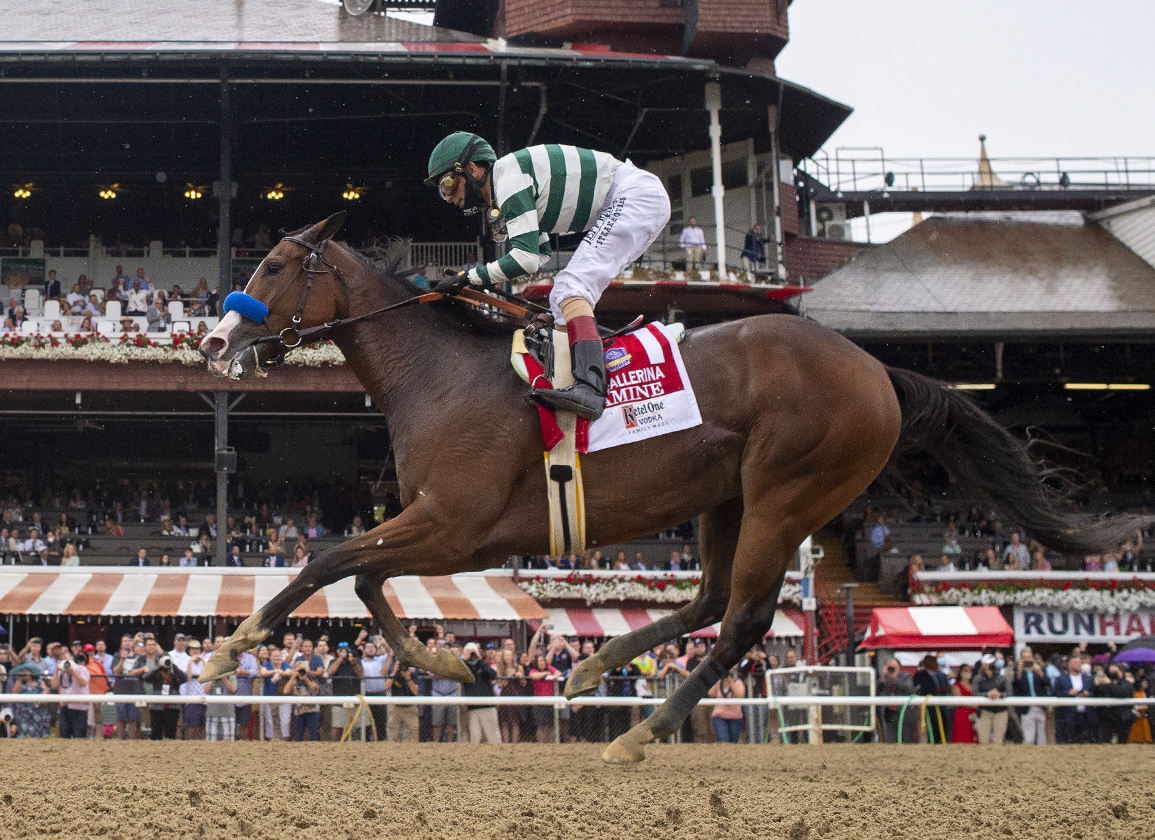 Gamine kicked off the Grade I action at Saratoga Saturday with a front-running score in the GI Ballerina H. Away alertly from her rail draw, the heavy favorite went straight to the front and was pushed along by Estilo Talentoso (Maclean's Music) through an opening quarter in :23.20 and a half in :45.68 with Lake Avenue in tow. Showing the way into the lane, the bay filly was kept to task by pilot John Velazquez, drawing clear for a facile victory. Lake Avenue held second and fellow California raider Cece completed the trifecta. The Ballerina is a “Win and You're In” for the GI Breeders' Cup F/M Sprint at Del Mar in November.

“The :23 felt pretty comfortable, :45 was pretty comfortable,” said Bob Baffert's assistant Jimmy Barnes. “[They were gaining on her] slightly, but once Johnny got her to switch leads, I wasn't really concerned. They were moving but we were still running. She sure does enjoy New York. She's been good and solid. The Gamine machine–that's her.”

“I'm a very happy man,” said owner Michael Lund Petersen. “I was very nervous today, only because she was giving so much weight away [126 pounds], so you just never know. I was thrilled to see she got the start we wanted. From there, I was just hoping she would hold on.”

Opening her account with a trio of victories, including an 18 3/4-length tour de force in the GI Acorn S. last June, Gamine romped by seven lengths in the GI Test S. at the Spa in August. Third as the favorite when extended to nine furlongs for the GI Kentucky Oaks, the $1.8 million EASMAY purchase dominated the GI Breeders' Cup F/M Sprint in November, to clinch the Eclipse Award for top female sprinter. Romping in the GIII Las Flores S. Apr. 4 at Santa Anita, the bay wired the GI Derby City Distaff S. at Churchill May 1 and demolished the field by 10 lengths in the GII Great Lady M. S. last time at Los Alamitos July 5.

Gamine is one of 10 Grade I winners and 44 graded victors for super sire Into Mischief. Her stakes-placed dam Peggy Jane is also the dam of the 3-year-old colt Splashtown (Speightstown), a $300,000 FTKOCT purchase raced in a partnership between breeder Stonestreet Stables and Starlight Racing. The Todd Pletcher trainee finished eighth in his lone start at Gulfstream in May. Peggy Jane's recent produce includes an unraced juvenile filly by Ghostzapper, a yearling colt by Kantharos and a 2021 colt by Into Mischief. She was bred back to that Spendthrift kingpin. This is also the family of Canadian champion Dynamic Sky (Sky Mesa).

This story was posted in Top News and tagged Ballerina, Bob Baffert, Breeders' Cup Win and You're In, Gamine, Into Mischief, Saratoga.