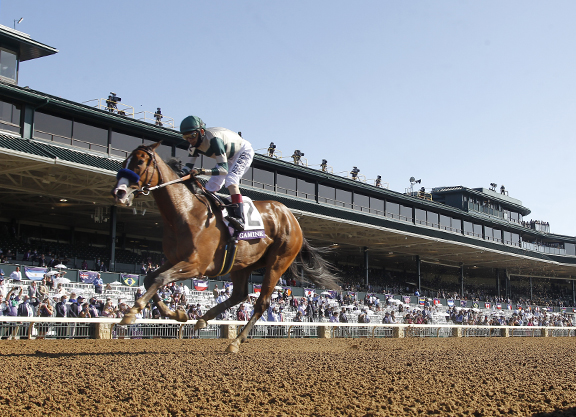 'TDN Rising Star' Gamine (Into Mischief) is the 1-5 morning-line favorite for Saturday's GI Derby City (ex Humana) Distaff, and, facing just five other rivals that lack anything near her front-running prowess, she could go off an even shorter proposition than that.

Now six-for-seven lifetime as her once-disputed Oaklawn allowance victory has now been reinstated, Gamine was other-worldly at trips around one turn during her championship season in 2020, winning the one-mile GI Longines Acorn S. by 18 3/4 lengths last June and the seven-furlong GI Longines Test S. by seven lengths in August. The $220,000 KEESEP yearling, who topped the 2019 Fasig-Tipton Midlantic 2-year-olds in training sale at $1.8 million, simply did not stay the nine furlongs of the GI Kentucky Oaks, finishing third (subsequently disqualified) to Shedaresthedevil (Daredevil) and Swiss Skydiver (Daredevil), but she righted the ship in no uncertain terms, besting the fleet Serengeti Empress (Alternation) by 6 1/4 lengths in the GI Breeders' Cup Filly and Mare Sprint Nov. 7. The champion female sprinter galloped around on a loose lead when supplemented to the GIII Las Flores S. at Santa Anita Apr. 4, and Saturday's race could play out identically.

Bell's the One (Majesticperfection) is the defending champ of the Derby City Distaff, a race that marked her first career top-level success. The seven-furlong specialist, also winner of the GII Lexus Raven Run S. at three, outbobbed Serengeti Empress to win this last year, then ran with credit to be third, beaten a nose for second, in the Filly and Mare Sprint. At her best when there is a good pace ahead of her, the bay dead-heated for second with Estilo Talentoso (Maclean's Music) in the GI Madison S. at Keeneland Apr. 3, as the victorious Kimari (Munnings) raced closer to a moderate pace and held sway late.

Sconsin (Include) earned her way into the F/M Sprint courtesy of an off-the-pace success in the GII Eight Belles S. on Oaks day last year. Fourth at Keeneland in November, she exits a seventh in the Madison.