Gallardo Off to Fast Start in New York 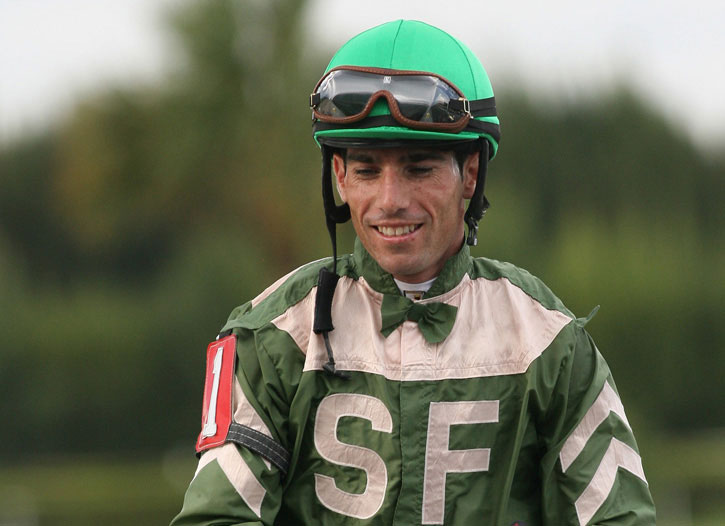 It's one thing to dominate racing at Presque Isle Downs, but it's certainly not an accomplishment that would tend to impress New York trainers. There are too many good jockeys to chose from to latch on to a guy who didn't win his first graded stakes race until this June. It would have been almost laughable to think that Antonio Gallardo could make an immediate impact on the New York riding colony.

But no one is laughing now.

Gallardo arrived in New York Oct. 7 and won with his second mount of the day, on a horse for Chad Brown. Entering Wednesday's card at Belmont, he has seven winners from 42 mounts, none of them bigger than his victory aboard Thundering Sky (Sky Mesa) for trainer George Weaver in last Saturday's $200,000 Pebbles S. (He also won the Sept. 24 Ashley T. Cole Stakes with Kharafa (Kitalpha), but that was before he had become a Belmont regular).

“(The win in the Pebbles) was really big for me,” Gallardo said. “You have a dream to do well in New York and when you win a race like that you really start to think it is possible.”

Gallardo, a 28-year-old native of Spain, began riding in his own country when he was 17 and says he was champion apprentice there. He disliked the cold weather there in the winters and went looking for a place where he would have more lucrative opportunities. He rode his first horse in the U.S. in 2008, but did not catch on quickly. He won seven races in 2009, 41 in 2010, 31 in 2011 and 42 in 2012. He turned a corner in 2013 winning 101 times and has been heading in a forward direction ever since.

Obviously, Gallardo has talent, but his work ethic has helped get him to where he is today. He leads the nation with 305 wins on the year. As he has for the past three years, he began 2016 at Tampa Bay Downs, where he had 135 winners and has been the leading rider for three straight years. His next stop was Presque Isle. He had 148 winners there, 46 more than runner-up Pablo Morales. It was also his third straight title at the Pennsylvania track.

Stars aren't made at Tampa and Presque Isle. But they can be at Monmouth. Throughout much of the summer, he did double duty between Monmouth and Presque Isle. There, he won 48 races and finished fourth in the standings. He had nine stakes winners, two of them for Steve Asmussen. Between that and the fact he was leading the nation in wins, people began to take notice.

Among them was agent Matt Muzikar, who had recently severed his relationship with Javier Castellano and was looking for a new rider. Meanwhile, Gallardo was looking to ride on a tougher circuit and all but had his bags packed for Santa Anita. That's when Muzikar called him and suggested he give the New York-Gulfstream circuit a try.

“I wanted to go to California and I like California,” Gallardo said. “A lot of good horses come from there. But I thought I had a better chance to do well in New York. I really like New York and when I was riding in New Jersey, I won for a couple of important New York trainers and also rode some winners for those guys at Tampa. Matt Muzikar is a great agent and has a lot of business, I thought this was the right moment to make the move to New York.

“When I made the my move, I wanted to be smart about it,” he said. “Going from Tampa to New York is like going to the major leagues and if you make your move when you're not doing good, you don't have a chance. You have to wait for the right opportunity. Agents have called me before and asked me to leave Tampa and Presque Isle, but I didn't feel it was the right time. But last year, I was the second-leading jockey in country in wins and when I came to New Jersey this year I won a lot of races for a lot of important people, like Steve Asmussen and Chad Brown. You need to have made a name for yourself before you can make a move like that.”

Gallardo know he can't climb to the top of the New York or Gulfstream riding colonies overnight, but he does think it can be done. He is not lacking in confidence.

In the meantime, he has put his lead in the national jockey standings in jeopardy. He leads Jose Ortiz by just 17 wins and Ortiz figures to win races at Belmont and Aqueduct over the next several weeks at a far greater rate than Gallardo does.

Gallardo said he'd love to hang on to the title, but knows that probably won't happen. Right now, he has other goals–and they are more important.