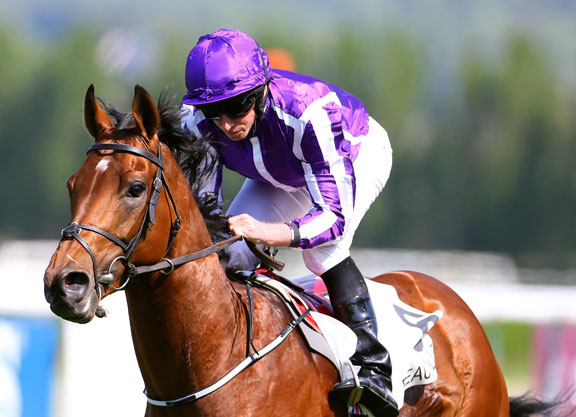 PUT TO THE SWORD
Aidan O'Brien may say that he got it wrong with Air Force Blue (War Front) at Newmarket, but the Ballydoyle stable was where it is used to being on Sunday as The Gurkha (Ire) (Galileo {Ire}) tore up the G1 Poule d'Essai des Poulains at Deauville. Having strung out the opposition by upwards of nine lengths over this trip in a Navan maiden Apr. 17, he traded at 15-2 on the PMU with the focus on Zarak (Fr) (Dubawi {Ire}). As it turned out, Derrick Smith's colour-bearer never saw that 2-1 favourite as he raced behind the leaders of the main group up the centre before taking control inside the last quarter mile. Bounding clear under hand riding from Ryan Moore, he had 5 1/2 lengths to spare over the long-time leader First Selection (Spa) (Diktat {GB}) who led home a bunch finish in behind. Zarak, the son of Zarkava (Ire) (Zamindar), had tracked the small pack up the stand's rail well away from the rest but was unable to make a major impression and wound up fifth. The Gurkha was providing Aidan O'Brien with a fourth renewal and the trainer was on hand to pay tribute to the winner who has made a meteoric rise from anonymity. “We always thought he was good, but last year he had colic twice and was not really trained and that is why we didn't enter him in the top races early on,” he explained. “We had to supplement him for this and he has a lot of scope and speed and won like a top-class horse.”

Sunday, Deauville, France
POULE D'ESSAI DES POULAINS-G1, €550,000, DVL, 5-15, 3yo, c, 8fT, 1:36.97, gd.
1–#@&THE GURKHA (IRE), 128, c, 3, by Galileo (Ire)
1st Dam: Chintz (Ire) (GSW-Ire, $149,166), by Danehill Dancer (Ire)
2nd Dam: Gold Dodger, by Slew o' Gold
3rd Dam: Brooklyn's Dance (Fr), by Shirley Heights (GB)
O-Derrick Smith, Susan Magnier & Michael Tabor; B-Chintz Syndicate (IRE); T-Aidan O'Brien; J-Ryan Moore. €314,270. Lifetime Record: 3-2-0-1, €322,515. *Full to Queen Nefertiti (Ire), GSP-Ire. Werk Nick Rating: A+++ *Triple Plus*. Click for the eNicks report & 5-cross pedigree.
2–First Selection (Spa), 128, c, 3, Diktat (GB)–Villa Sonata (GB), by Mozart (Ire). (£42,000 2yo '15 BBASC2). O-Abdulla Al Mansoori; B-D Gonzalo Ussia Figueroa (SPA); T-Simon Crisford. €125,730.
3–Dicton (GB), 128, c, 3, Lawman (Fr)–Saying, by Giant's Causeway. O-Robert Ng; B-Wertheimer & Frere (GB); T-Gianluca Bietolini. €62,865.
Margins: 5HF, NO, HD. Odds: 7.60, 54.10, 9.00.
Also Ran: George Patton, Zarak (Fr), Crazy Horse (GB), Taareef, Moon Trouble (Ire), Attendu (Fr), Jimmy Two Times (Fr), Zelzal (Fr), Alignement (GB), Birchwood (Ire).
Like every resident at Ballydoyle, The Gurkha had live potential on pedigree to reach the top as a 2-year-old with his dam being the G3 CL Weld Park S. scorer Chintz. Bred to Galileo each time, her second foal was the TDN Rising Star Queen Nefertiti (Ire) who was third in last year's G3 Brownstown S. and descends from the outstanding producer Brooklyn's Dance, responsible for the shock G1 Prix de l'Arc de Triomphe heroine Solemia (Ire) (Poliglote {GB}) and the G1 Prix du Jockey Club runner-up Prospect Park (GB) (Sadler's Wells). Also from the family of the 2012 G1 Prix Marcel Boussac and 2013 G1 Prix Saint-Alary winner Silasol (Ire) (Monsun {Ger}) and the Epsom Derby hero Authorized (Ire), The Gurkha had the shape of a middle-distance prospect and once over his problems looked as if he might need extra than a mile when staying on into third on his debut at Leopardstown Apr. 6. Turning that logic on its head at Navan just 11 days later, the bay was given a positive ride by Ryan Moore and barely needed encouragement from the saddle to easily leave Saafarr (GB) (Teofilo {Ire}) well behind. That form was given a significant boost when the runner-up went on to run a close-up fifth in the G3 Derrinstown Stud Derby Trial and The Gurkha was given due respect by the Deauville crowd despite his inexperience lining up against TDN Rising Star Zarak and co. Following First Selection on the far side of the main group up the centre while Zelzal (Fr) (Sea the Stars {Ire}) led a group of four racing against the stand's rail, the Irish challenger was committed with 1 1/2 furlongs remaining and wassoon clear in an emphatic show of superiority. The winner's targets are everywhere, according to Aidan O'Brien. “He could possibly run in the G1 Prix du Jockey Club [at Chantilly June 5] or the [June 4] G1 Epsom Derby,” he said. “He has speed though, so it could even be the G1 St James's Palace S. [at Royal Ascot June 14] next.” Simon Crisford, who was reaching a personal milestone with First Selection placing in a Classic, said of the runner-up, “He was much too fresh and keen, but he has run a great race today. Unfortunately, the owner could not be there to see him and we'll see what to do next when we get together.” Chintz has a yearling full-sister to the winner waiting in the wings. Click for the Racing Post result or the free Equineline.com catalogue-style pedigree. Video, sponsored by Fasig-Tipton.