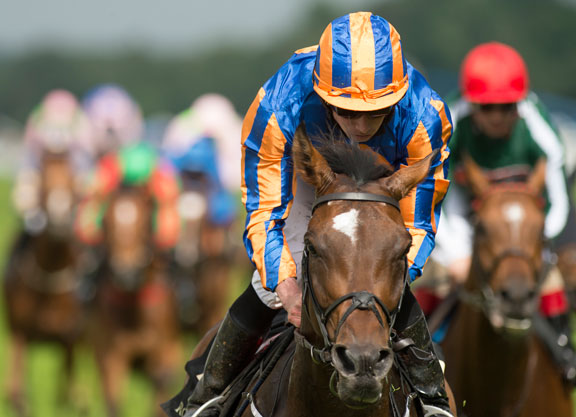 Nobody produces G1 Gold Cup winners like Aidan O'Brien and with a record six winners in the last 10 years obviously not enough, Lloyd Williams, Michael Tabor, Susan Magnier and Derrick Smith's Order of St George (Ire) (Galileo {Ire}) duly delivered lucky number seven for the current Ballydoyle supremo when overcoming a troubled trip in Thursday's renewal staged in honour of the Queen's 90th birthday. After enjoying the perfect spot initially under cover behind the leaders, the 10-11 favourite was shuffled back to worse than mid-division along the back straight before being muscled out of his pocket before the home turn. Producing a sustained run down the outer to gain the lead approaching the furlong pole, the emphatic G1 Irish St Leger hero galloped remorselessly to the line for a three-length verdict over Mizzou (Ire) (Galileo {Ire}) as the cream rose to the top. “That was a very messy race, but he's a very exciting horse with a lot of class and class horses win races,” Moore said. “I had to ride about four different races there and it was a nightmare the whole way, but he's so well-balanced he was able to dance around them and luckily it worked out. He picked up very well and to be pouring it on at the end of two and a half miles, it has to be a very good performance.”

Like most of those who eventually win group 1 races for Ballydoyle, there was an early flash of the talent required when Order of St George took his maiden by 8 1/2 lengths on soft ground over a mile at Leopardstown in August 2014, but he took nearly a year to translate that raw power into performance at a high level. Only fifth in the G3 Autumn S. over a mile at Newmarket and second in the nine-furlong Listed Eyrefield S. back at Leopardstown in October of his juvenile campaign, the bay reappeared in the 14-furlong G3 Curragh Cup and lost out by a short head to Bondi Beach (Ire) (Galileo {Ire}) before taking a confidence-restoring Down Royal conditions event over 13 furlongs with authority in July. Moving into another dimension with a 7 1/2-length drubbing of the 2012 G2 Hardwicke S. winner Sea Moon (GB) (Beat Hollow {GB}) in the G3 Irish St Leger Trial S. back over a mile and a three quarters at The Curragh in August, he was a late switch from the English to the Irish Leger in September and made a mockery of that contest open to older horses to register an 11-length defeat of the impressive G3 Geoffrey Freer S. winner Agent Murphy (GB) (Cape Cross {Ire}).

Understandably, all the talk over the winter months was about whether he could be the next Yeats (Ire), Fame and Glory (GB) (Montjeu {Ire}) and Leading Light (Ire) (Montjeu {Ire}) and he did little to dampen the flames when capturing the G3 Saval Beg S. on a quick surface over 14 furlongs on his re-introduction at Leopardstown June 3. While these kind of underfoot conditions will always play into his hands, the fact remained that they in turn made an already extreme test of staying strength an altogether sterner one and so Ryan Moore had to ask him to reserve his power early on and coast in the biggest Gold Cup field assembled in modern history.

A touch keen in eighth as the G1 Prix du Cadran hero Mille et Mille (GB) (Muhtathir {GB}) set out his stall in a clear lead, he seemed to be ideally positioned as the French front-runner stretched the elastic running into Swinley Bottom. Ryan Moore knew that the leader was doing too much and would come back, but his biggest problem was dead ahead as the back-pedalling German raider Wasir (Ger) (Rail Link {GB}) was in his direct path for too long for his comfort. In the back ten as a result turning for home, Order of St George straightened with over five lengths to make up on Mille et Mille but that rival was soon to empty and without needing the whip the Tabor colour-bearer rolled by him and into the lead with over a furlong left. The complexion of the race changed instantly there and only Mizzou and Andrea Atzeni were able to follow at a respectable distance as another Coolmore favourite delivered for the massed crowds as this meeting.

Part-owner Michael Tabor said, “It looked a rough race to me and he's a special horse, as they all bunched up,” before paying tribute to Aidan O'Brien on a day that he registered a 50th and 51st Royal win. “I think all the superlatives have been said about Aidan and all I can really do is endorse what everybody has said–he is one of the great trainers,” he added. The Ballydoyle handler was typically quick to pour credit onto all others, however. “Ryan relaxed him lovely and he came home very well,” he said. “This is a long, tough race and because he had never run over the trip before, Ryan had to put him to sleep. It was a little bit rough, but he's a horse that loves racing and hopefully he'll come back.”

Of future targets, O'Brien admitted to being open-minded with regards his trip. “I think the plan is to give him a little rest and bring him back and get him prepared for the Irish St Leger [at The Curragh Sept. 11] and if that all ends well, he could go for the [G1] Prix de l'Arc de Triomphe [at Longchamp Oct. 2].” Mizzou's trainer Luca Cumani is looking at keeping the runner-up over long distances and commented, “He ran very well and I'm delighted, as I think that was one of the best Gold Cups ever run. He just found one that was too good, but that was Mizzou's best performance ever. I don't think Goodwood would suit him so the plan would be more like the [G2] Lonsdale [Cup at York Aug. 19] and the [Sept. 9 G2] Doncaster Cup and then come back here in October.”