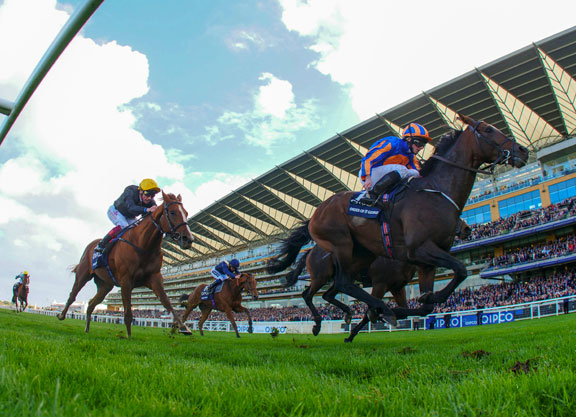 It looked doubtful for much of the straight, but Order of St George (Ire) (Galileo {Ire}) lives to engage the public and he found the line in time to kick off Ascot's Champions Day with a victory for Ballydoyle in Saturday's G2 Qipco Long Distance Cup. Travelling in mid-division throughout as if 4-5 favouritism was generous, the dual G1 Irish St Leger and G1 Gold Cup hero who was fourth in the Arc 20 days ago came under a drive before the home straight and appeared to be going nowhere soon after. Seemingly beaten approaching the furlong pole as old rival Torcedor (Ire) (Fastnet Rock {Aus}) strode into a clear lead under Colm O'Donoghue, the market leader found something for Ryan Moore to inhale that rival near the line and win by a half length, with Stradivarius (Ire) (Sea the Stars {Ire}) the same margin back in third. “I was surprised,” Moore commented in reference to the manner of Order of St Gerorge's win. “I was very happy the whole way round and I thought I had the front two covered, but it didn't look likely for a long time. As they came back to him, he started to get motivated and he's an unbelievably good horse who ran a very good race in the Arc and has come here at the end of a long hard year. He looked magnificent and is a beautiful horse and a pleasure to have anything to do with. He's very talented, but that ground was very hard work–I'd call it very soft.”

Now almost a veteran of these staying contests with some middle-distance class thrown in along the way, Order of St George has a mercurial quality that ensures there is never a dull moment. His two wins in the Irish Leger in 2015 and 2017 were carried out by a cumulative margin of 20 lengths, but in between he went under to Wicklow Brave (GB) (Beat Hollow {GB}) when long odds-on. His 2016 Gold Cup success was marked by the same initial lethargy and finishing surge that characterised this performance, but 12 months ago in this he was only workmanlike as he ran on into fourth. Third and fourth in the last two renewals of the G1 Prix de l'Arc de Triomphe, with the most recent possibly a stronger one, the bay provided a heart-in-mouth moment for his legion of supporters as he came back just 20 days after his Chantilly exertions.

Sluggish from the stalls as he has been of late, Order of St George was allowed to slot into mid-division as his Gold Cup conqueror Big Orange (GB) (Duke of Marmalade {Ire}) tried to dominate from the front without the same conviction on ground which had turned against him. As he fell away in the back straight and the 3-year-old Mount Moriah (GB) (Mount Nelson {GB}) took over, Moore looked poised as he brought the Ballydoyle challenger forward with Stradivarius tracking him. As Torcedor, who had beaten Order of St George in the G3 Vintage Crop S. at Navan Apr. 23, cut loose in the straight it looked as if the favourite might not even make the frame but there was something left in the locker and when it came down to a challenge he raised his game to prevail.

Aidan O'Brien, who was standing on the cusp of history, was able to enjoy the perfect warm-up for his bid to join Bobby Frankel on the world record. “He is tough and hardy and never stops,” he said. “In every race he has ever run in, he is always finishing. We saw him in the Gold Cup and sometimes the line comes too quick, but he doesn't stop. He has had a busy time. Obviously we are delighted with him. That is him for this year, I imagine.” Torcedor was registering a career-best and trainer Jessie Harrington said, “He's run a real cracker, I'm absolutely thrilled. He's been beaten by a very good horse, it's as simple as that. He put it up to him and he's come on again since the summer and I've only had him a year, not even a year in training. I'm still learning and he'll be back next year.” Stradivarius ran his usual game race in defeat on unfavourable conditions and his trainer John Gosden said, “He's run a blinder. It's not his favourite ground, he has this ability to quicken and you can't really quicken in that. It was a tremendous race, Order of St George brings Arc form in here. He stays in training and we look forward to races like the Ascot Gold Cup.”