Galileo's Love Hangs Tough In The Prince Of Wales's 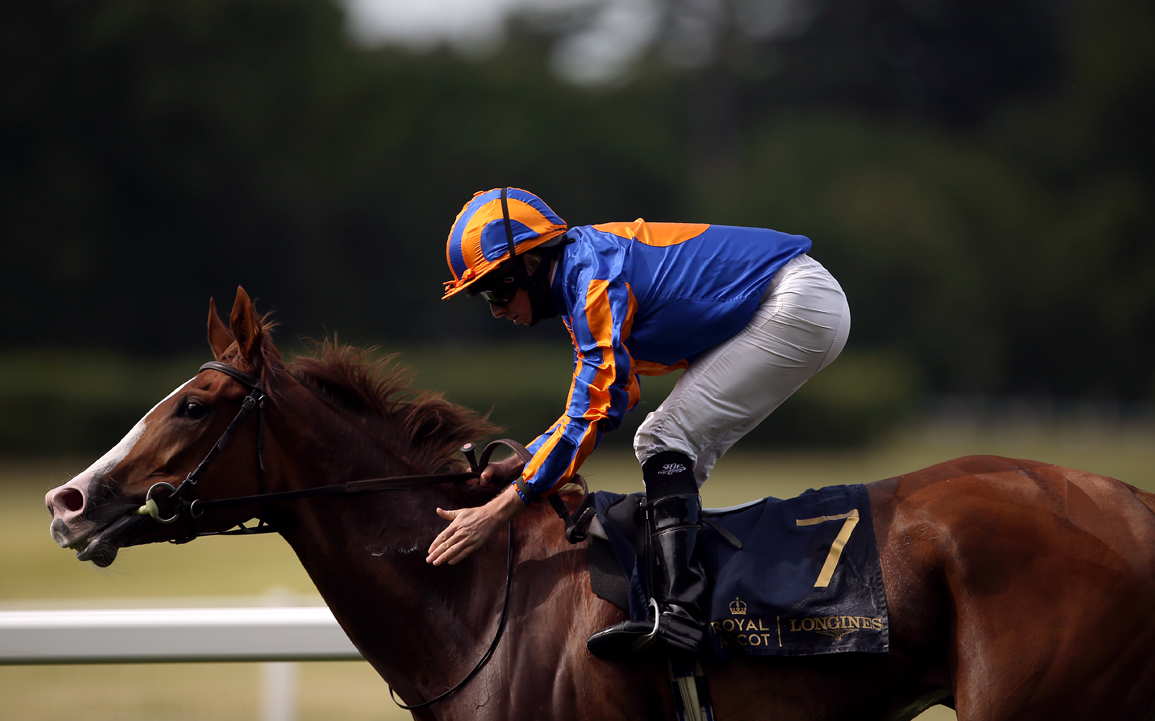 Long absent and much-missed, Love (Ire) (Galileo {Ire}) returned to the big time at Royal Ascot on Wednesday and had to be as tenacious as she is classy to see off Audarya (Fr) (Wootton Bassett {GB}) under a perfectly-judged front-running ride in the G1 Prince of Wales's S., a “Win and You're In” for the GI Breeders' Cup Turf this fall. Last year's G1 1000 Guineas, G1 Epsom Oaks and G1 Yorkshire Oaks heroine had been denied what had looked to be a match with Lord North (Ire) (Dubawi {Ire}) after that rival was withdrawn in the morning, but instead was put through the wringer by the G1 Prix Jean Romanet and GI Breeders' Cup Filly & Mare Turf heroine Audarya as the fillies came to the fore. Always comfortable on the lead, the 11-10 favourite appeared temporarily in trouble at the top of the straight but kept digging in against the rail to prevail by 3/4 of a length from the James Fanshawe trainee who is fast becoming a force to be reckoned with in her own right. Love's stablemate Armory (Ire) (Galileo {Ire}) finished on their heels in third, beaten the same margin. “It was her first run since last August and she beat a Breeders' Cup winner,” Moore said. “I'm sure she'll improve, but I'm delighted with her today. She's a very honest filly with a lot of ability.”

Love, who was Ryan Moore's last European group 1-winning ride for Ballydoyle when taking the Yorkshire Oaks in August, first came to the fore when winning the G3 Silver Flash S. over seven furlongs at Leopardstown in July 2019. Fifth in the G2 Debutante S. at The Curragh before bouncing back to take the G1 Moyglare Stud S., she ended her juvenile campaign with a third in the G1 Fillies' Mile at Newmarket in October prior to her perfect three-race 3-year-old campaign. She had to prove herself again here against a filly that has emerged from relative obscurity to regular in the highest league in the space of a year and had to do it on her own in front, but the ground was at least ideal for her to flow along and play catch-me-if-you-can.

Registering a 75th Royal Ascot victory, Aidan O'Brien said, “It was a little bit of a risk coming here with her first time, as often when you prepare them and then don't run them it can be a little bit tricky but we knew she was ready to run even if she wasn't cherry-ripe today. It was lovely to start her on beautiful ground and where better to start? When you do that you are a little bit vulnerable, so we're delighted with her. Ryan gave her a lovely ride–he had a balancing act, as he knew a good pace was going to suit Armory and she is very versatile and had made the running before. Ryan was happy to get a lead if someone wanted to, but it just happened that there wasn't anyone willing to. What was unusual when we were tacking her up was that we put a 52 girth on her and it wouldn't fit her, so we had to go back for a 54. That's unusual for a filly like her and obviously she's really filled into her chest. It's unusual to get a big, deep-girthed filly like that. She can go anywhere, there is the [July 24 G1] King George [VI and Queen Elizabeth S.] and the [G1] Eclipse [at Sandown July 3] and any of those races. She'll be very happy staying at this distance and also be happy going back up to a mile and a half, so we'll see what the lads want to do and how she comes out of this race. Armory had to be ridden patiently and gently and ran a great race, he just didn't quite get there.”

Audarya's trainer James Fanshawe said of the runner-up, “We are all absolutely thrilled–she's proven that she's progressed again from last year and is a really exciting prospect for the rest of the year. It looked at the furlong pole that we were going to give her a race and William said the pace wasn't actually that strong. We'll have a think about her next race, whether it's the [Aug. 22 G1 Prix] Jean Romanet or the [July 29 G1] Nassau [at Goodwood]. It'll be one of those races and we'll try and space them out.”