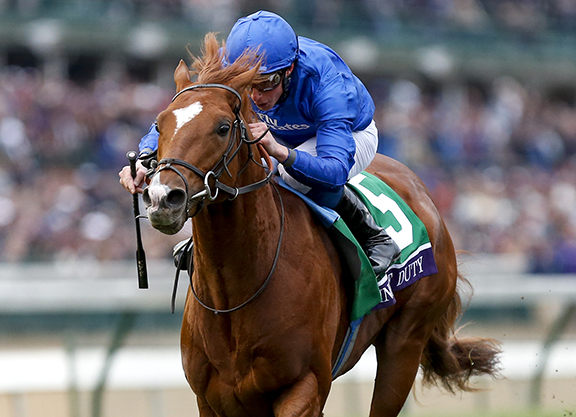 Godolphin's Line of Duty (Ire) survived an inquiry and an objection to become super sire Galileo's record-extending 75th Group 1 winner with a late-charging victory in Friday's GI Breeders' Cup Juvenile Turf. Line of Duty broke half a step slowly, but recovered quickly and sat just off the pace in traffic as Somelikeithotbrown (Big Brown) raced keenly on the lead through fractions of :24.40 and :48.46. Shuffled back to mid-pack, Line of Duty was buried on the rail turning for home and appeared to crowd Uncle Benny (Declaration of War) before William Buick angled him to the center of the course in upper stretch. Uncle Benny found a seam to run through and was challenging the pacesetter in deep stretch, but Line of Duty was closing relentlessly and just nailed that pair on the wire. The stewards looked at the wild action at the top of the stretch, but made no change to the order of finish.

“Knowing the horse, one thing we knew, he was going to stay strong to the line, and that's what he did. It's great for the team, and great for Godolphin,” said trainer Charlie Appleby, who was winning his third Breeders' Cup race and his second Juvenile Turf from just five championship starters. “William gave him a great ride. He managed to get him wide and come with a clear run.”

Of his trip, Buick said, “Our horses, by rule, they jump slower than the American horses, but this horse, he really jumped well and gathered his stride very quickly. I was in a position where I didn't have a cover for my horse, and I was too close to the pace. So I had to just rein him back and restart the race and just get him in a rhythm where we were going forward gradually, because he's a horse that, when he hits his top gait, he's got a good turn of foot. To be able to do that, he had to work harder. It wasn't straightforward for him at all. That's another sort of plus point to his performance really. Credit to the horse. Of course, when you pull that in the stretch, and he just slightly hung right, he just got a bit lonely where he was and lost concentration for the stride. The combination of the outside horses slightly coming out as well, but it was sort of late in the race. When he quickened, he really put the race to bed. He was very strong at the line. I was impressed with his performance. It was a very mature performance from a young horse.”

Of the objection, Irad Ortiz, Jr., aboard Uncle Benny, explained, “I had to check going to the quarter pole. That's why I claimed foul. He ran huge.”

Trainer Jason Servis added of the runner-up's trip, “It looked like he banged him pretty good. I got beat a neck. But, my dad was a steward for 40 years, and you've got to respect their opinions.”

Line of Duty, who opened his career with a pair of runner-up efforts in July, graduated going one mile at Goodwood Sept. 4. He entered the Breeders' Cup off a win in the Oct. 1 G3 Prix de Conde at Chantilly.

“I was confident in this horse,” Appleby said. “In his last start there, when he won in Chantilly, we spoke immediately afterwards and said he's probably got the right profile to come here and be very competitive. He's a neat horse, and he seems to enjoy getting squeezed up there and being in the battle. I think all those attributes have come to the fore today, along with William's great ride.”

Appleby saddled Masar (Ire) (New Approach {Ire}) to run sixth in last year's Juvenile Turf. That colt returned to win this year's G1 Epsom Derby, but the trainer said it was too soon to make those plans for Line of Duty.

“To be brutally honest, it's a bit early to be putting out those sort of potential races to look at,” Appleby said.

After finishing second in the 2010 G1 English 1000 Guineas and third in the G1 Coronation S., Jacqueline Quest sold as a 4-year-old for 600,000gns to bloodstock agent Charlie Gordon-Watson on behalf of the Co. Meath-based Triermore Stud at the 2011 Tattersalls December sale. Her first foal was stakes-placed Hibiscus (Ire) (Galileo {Ire}), a 625,000gns TATOCT purchase by M.V. Magnier in 2014, who sold in foal to Zoffany (Ire) to John and Jake Warren for 400,000gns at last year's Tattersalls December sale.

Godolphin's LINE OF DUTY (IRE) (c, 2, Galileo {Ire}-Jacqueline Quest {Ire}, by Rock of Gibraltar {Ire}) became the 75th Group 1 winner for his superstar sire Galileo with a thrilling success in the GI Breeders' Cup Juvenile Turf. Bet down to 7-2 from a 10-1 morning-line while adding Lasix for this American debut, the chestnut kept a watchful eye on pacesetter Somelikeithotbrown (Big Brown) from mid-pack, riding the rail through a first half-mile in :48.46. Swung out to the center of the course to make a run in the lane, Line of Duty came flying up the outside to tag Uncle Benny (Declaration of War) and Somelikeithotbrown on the wire, winning by a half-length in 1:40.06. He had to survive a stewards' inquiry after exchanging a bump with Uncle Benny in the final sixteenth. It was the 28th top-level win of the season for Godolphin and their 11th this year with trainer Charlie Appleby. Second in his first two attempts, debuting at Sandown July 6 and then at Haydock July 21, Line of Duty broke through at third asking at Goodwood Sept. 4. He followed suit with a win in Chantilly's G3 Prix de Conde S. Oct. 1. .