Galileo's Joan Of Arc Prevails In The Diane 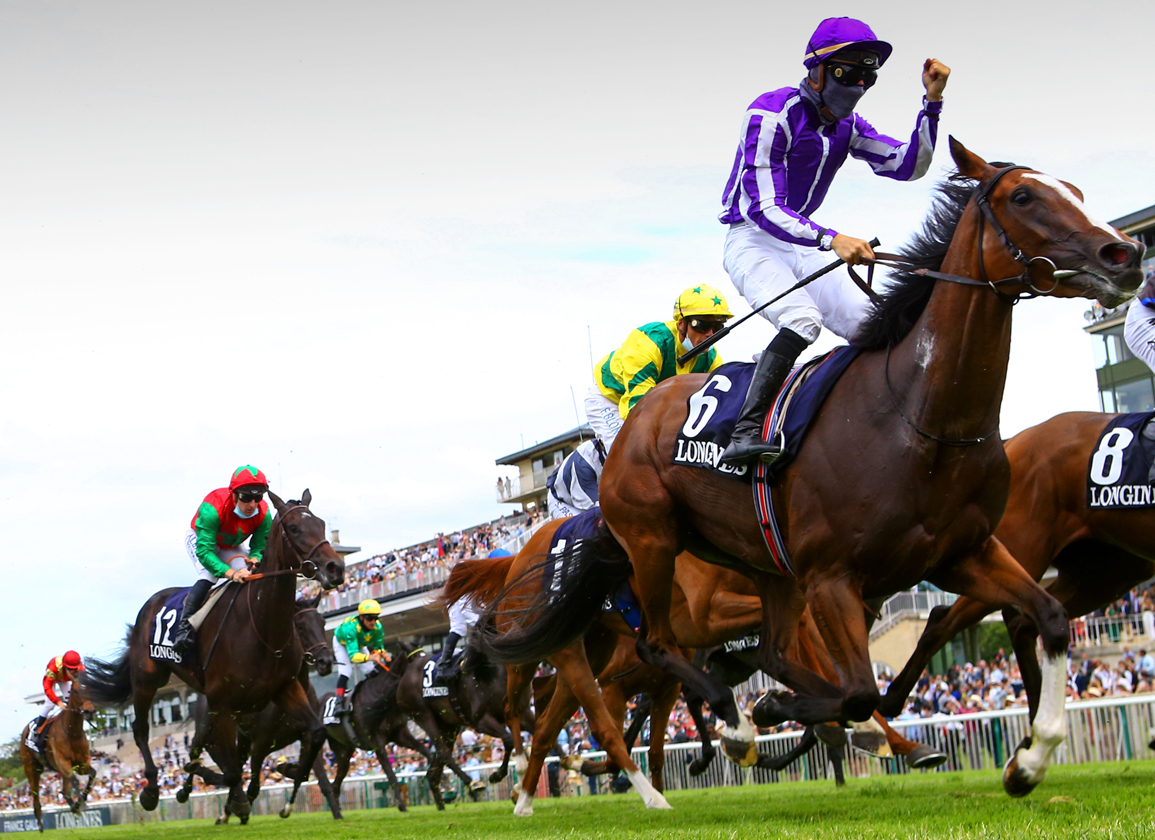 Things may not have gone to plan in all of the English Classics for Ballydoyle so far in 2021, but the stable continued their charmed existence in France on Sunday as Joan of Arc (Ire) (Galileo {Ire}) provided Classic number three for the season and a first renewal of Chantilly's G1 Prix de Diane Longines for Aidan O'Brien. Combining again with Ioritz Mendizabal, who had steered St Mark's Basilica (Fr) (Siyouni {Fr}) to glory in the G1 Poule d'Essai des Poulains and G1 Prix du Jockey Club, the master of Rosegreen had the full-sister to the Classic-winning pair Gleneagles (Ire) and Marvellous (Ire) at concert pitch for the 10 1/2-furlong feature. Drawn favourably in five, the 53-10 shot who was touched off by Empress Josephine (Ire) (Galileo {Ire}) in the G1 Irish 1000 Guineas at The Curragh May 23 made full use of that position to shadow the early leader Sibila Spain (Ire) (Frankel {GB}). Working hard up the straight, she took until the last 50 metres to subdue that TDN Rising Star and assert for a 3/4-of-a-length verdict over the Andre Fabre duo of Philomene (Ire) (Dubawi {Ire}) and Burgarita (GB) (Sea the Stars {Ire}). Philomene, who was sent off the 10-3 favourite, finished strongly from behind to deny her stablemate by a short head, as Sibila Spain felt the pinch late to slip back to fourth, half a length further behind. “When I talked to Aidan he was pretty confident she would run a great race and that the longer trip would suit her very well,” the winning rider said. “He asked me to ride her like the winner of the Jockey Club and that is what I did. We had an excellent trip and she quickened very nicely. Three hundred metres from the finish, I wasn't sure we'd win but she's done it easily in the end. She will stay further and it may be that a mile and a half is even better for her.”

Denied a debut win by a short head over seven furlongs at Dundalk in November, Joan of Arc was off the mark in testing conditions over that trip at The Curragh Mar. 21 before finishing sixth when stablemate Empress Josephine was 10th in the G3 Ballylinch Stud 1000 Guineas Trial again over that distance at Leopardstown Apr. 11. Heading back to the latter venue and moving up to a mile for the G3 Irish 1000 Guineas Trial, the bay made all before losing out by a short head in the shade of the post in the Irish Guineas. This was as straightforward as it gets in a Chantilly Classic, with Mendizabal encountering no traffic issues and an ideal lead from the Christopher Head trainee who was unpressured on the front end.

As they sauntered past the chateau, Burgarita was allowed to tank down the outer to gain a more prominent position but little else had changed since the outset. In early straight, it looked as if Aurelien Lemaitre had the race in hand on the smooth-travelling 13-1 shot Sibila Spain, with Joan of Arc beginning to work along with Burgarita and TDN Rising Star Harajuku (Ire) (Deep Impact {Jpn}) another Fabre representative in the firing line. As the leader began to falter in the last 100 metres, Joan of Arc found another surge and that was decisive as Philomene lunged too late having had three lengths to make up from the top of the lane.

“Aidan O'Brien is my Santa Claus! He has given me two superb horses to ride in recent weeks,” Mendizabal quipped. “He gave me some simple instructions, but when the horses are as good as that, it's easy. All this success is a direct result of the hard work put in at home and for me to be working with the Aiden O'Brien team is just incredible.” Aidan O'Brien's record is now complete, with this victory meaning that he has trained the winner of every British, Irish and French Classic and he said, “I'm delighted, even more so because she was bred at home by John and Susan Magnier. Ioritz gave her a super ride. This is a race we have tried to win many times, but it is not easy to win. According to Ioritz, she shouldn't have a problem stepping up to a mile and a half. The [G1] Qatar Prix de l'Arc de Triomphe could therefore be a possibility for her. We have a lot of very good three-year-olds this year, it's very exciting.”

Philomene was emulating her half-sister Chicquita (Ire) (Montjeu {Ire}), who was runner-up to Treve (Fr) (Motivator {GB}) in 2013, and Godolphin's Lisa-Jane Graffard said, “We are delighted with Philomene's run and couldn't be prouder of her effort. She has justified the belief that everyone has always had and Andre Fabre feels that stepping up to 12 furlongs will be ideal for her. She comes from a family that improves with age. I think she looked better in the paddock today and I think that she will come on again for that. We have always loved her. She comes from a very good pedigree and she is also very beautiful, so we are very lucky to have her.”

Maxime Guyon, who was to ride four winners on the card, said of Burgarita, “For just her third race, that was a magnificent performance. She still isn't quite hardened but that will come with time, she has run excellently today.” Christopher Head said of Sibila Spain, “She's run a blinder and it was the right decision to supplement her. She did what we expected her to do and we have no complaints. Today we have really seen her quality at the top level. It is very reassuring, especially as she still has the capacity to progress, not forgetting that she didn't run as a two-year-old. The fact we were drawn on the wide outside may have gone against us, especially in the closing stages. As for the future, we will have a chat with her owners. You always want to win,
but even still, fourth in a race like this is excellent.”

Joan of Arc becomes the fourth group 1 winner for the incredible You'resothrilling (Storm Cat), the G2 Cherry Hinton S.-winning full-sister to the Iron Horse Giant's Causeway. Every foal–which are all by Galileo–she has produced thus far has achieved at least a placing at the highest level, with the aforementioned Gleneagles annexing the G1 English and Irish 2000 Guineas, G1 St James's Palace S. and G1 Goffs Vincent O'Brien National S. and Marvellous taking the Irish 1000 Guineas. Happily (Ire) was successful in the G1 Moyglare Stud S. and G1 Grand Criterium and fourth in this three years ago, Taj Mahal (Ire) captured two editions of the G2 Sandown Classic and was runner-up in the GI Secretariat S., Coolmore (Ire) took the G3 C L & M F Weld Park S. and was third in the GI Belmont Oaks Invitational, and Vatican City (Ire)–the only one not to score in group company–was second in last year's G1 Irish 2000 Guineas.

You'resothrilling, who also has an as-yet unnamed 2-year-old full-sister to them all named Toy (Ire), is also a full-sibling of Pearling, the dam of the G1 Irish Champion S. hero and first-season sire Decorated Knight (Ire) also by Galileo. They are out of the six-times graded-stakes winner Mariah's Storm (Rahy), whose eight stakes performers include Giant's Causeway's full-brothers and sires Tumblebrutus and Freud and Galileo's Butterflies (Ire) who was second in the G3 Munster Oaks and third in the G3 Flame of Tara S. and is now the dam of this year's TDN Rising Star Yet (War Front). You'resothrilling and Pearling were the first two fillies produced by Mariah's Storm, with the next being the unraced Love Me Only (Ire) (Sadler's Wells) who also did her part for the family by throwing the G2 Great Voltigeur S. winner, G1 Irish Derby runner-up and G1 Epsom Derby third Storm the Stars (Sea the Stars {Ire}). Another of Mariah's Storm's unraced daughters Fabulous (Ire) by Galileo is responsible for Thinking of You (American Pharoah), who was third behind Joan of Arc in the G3 Irish 1000 Guineas Trial.