Galileo's Highland Reel Gets To Epsom In Time For Cup Glory 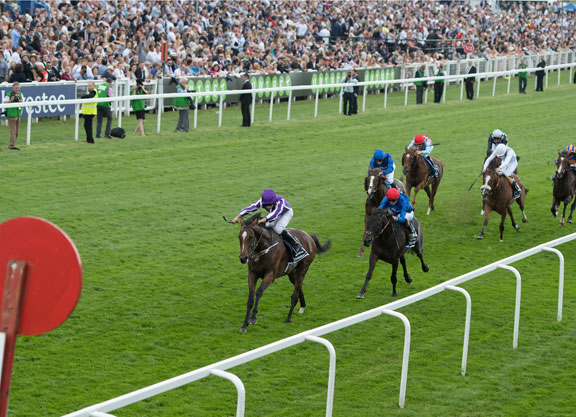 Delayed on his journey over to Epsom, Highland Reel landed in the nick of time and what would have proved an ordeal for a lesser horse was shrugged off by last year's G1 King George VI and Queen Elizabeth S. and GI Breeders' Cup Turf winner who provided Aidan O'Brien with an eighth renewal of this prestigious event. Last seen putting in a rare below-par effort when last of seven in the G1 Dubai Sheema Classic at Meydan Mar. 25, the bay was customarily hot in the preliminaries but enjoyed a relatively easy time at the head of affairs in the race with Ryan Moore sitting pretty. It was Hawkbill who threw down the first challenge in the straight and for a handful of strides they were toe-to-toe, but the Ballydoyle raider started to see him off passing the two-furlong pole. A bigger threat was emerging from behind from that rival's stablemate Frontiersman and that son of Ouija Board (GB) (Cape Cross {Ire}) had serious momentum as the line neared. However, Highland Reel had the advantage and the Godolphin representative who was supplemented this week hung down the camber towards the rail and his winning chance went astray. “He obviously went through a lot and things weren't running smoothly this morning, but it's been a big team effort and I can't thank them all enough,” Aidan O'Brien said. “He's an amazing horse, so tough and he has speed and stays.”

Highland Reel is one of the new generation of middle-distance performers able to play on the main stage both in Europe and further afield, as evidenced in all-the-way demonstrations of power under Seamie Heffernan in both the 2015 GI Secretariat S. and in the BC Turf at Santa Anita in November and under Moore in the King George last July. Also the winner of the 2015 G1 Hong Kong Vase and caught close home by Satono Crown (Jpn) (Marju {Ire}) in that event last year, he even managed a second to Found (Ire) (Galileo {Ire}) in the Arc and to a Postponed (Ire) (Dubawi {Ire}) at a peak in the G1 Juddmonte International S. at York in August. Last year he was second in the G2 Hardwicke S. at Royal Ascot before his King George win and he may go back there again for that June 24 stepping stone. “He has the option of the Hardwicke at Royal Ascot and then on to the [July 29] King George, but I suppose we'll see how he comes out of this and see whether he goes to the Hardwicke or straight for the King George,” O'Brien added.

Charlie Appleby may have been on the losing end, but he had much to take out of the race particularly with the unexposed and beautifully-bred Frontiersman who could look for revenge at the Royal meeting. “I'm delighted with the pair of them. Frontiersman was taking a big step up from a handicap, but his homework had been so good and he's got a pedigree to die for, he's a typical Dubawi and getting better with age,” he explained. “We were not coming here confident, but we paid £25,000 to supplement for a reason as we wanted to have a crack. James [Doyle] said his inexperience just caught him out, but he saw it out well and galloped to the line. We'll look to something like the Hardwicke as the next stop with him. I was delighted with Hawkbill, too, but he loves soft ground. It would not worry me coming back in trip. William [Buick] said he's got a gear, but the winner is a good horse. William went for a battle, but the winner found again. What he proved at Newbury was he can quicken on soft ground when others can't. He's done himself proud there.”

Hveger, who was placed in the G2 South Australian Oaks and G2 Schweppes Oaks, is also the dam of Idaho who was seventh here as he started his 2017 campaign bidding to make up lost ground on his brother. Her first foal was Valdemoro, runner-up in the G1 Crown VRC Oaks and G1 Vinery Stud Storm Queen S., while she has a 2-year-old filly and a yearling colt also by Galileo, with the former named Via Condotti (Ire). Her full-brother Elvstroem (Aus), or “Elvis”, registered five group 1 wins like Highland Reel including the Caulfield Cup and Victoria Derby, while her half-brother Haradasun (Aus) (Fusaichi Pegasus) collected the G1 Doncaster H., G1 George Ryder S. and the G1 Queen Anne S. at Royal Ascot. Descendants of their dam, the G1 Australian Oaks heroine Circles of Gold, include Ballydoyle's high-class sprinter Starspangledbanner (Aus) and the G1 Schweppes Thousand Guineas heroine Amicus (Aus) (Fastnet Rock {Aus}).