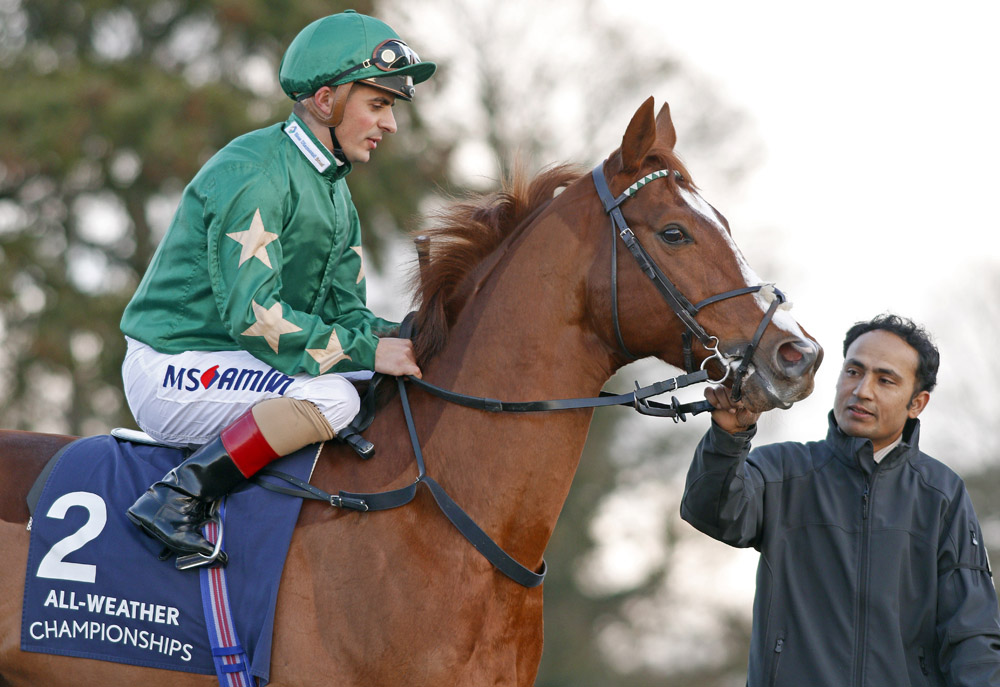 Last seen winning the nine-furlong G3 Meld S. at Leopardstown in July, Decorated Knight stepped back out of the shadows to continue the winning thread at the expense of the favourite Arab Spring in a renewal where the cream rose to the top. Held in some regard by former trainer Roger Varian, the chestnut managed a third in the 2015 G2 Joel S. at Newmarket but really started to flourish last term when switched to his current yard. Successful in the Listed Festival S. over this trip at Goodwood in May and the Meld either side of a second in the G3 Diomed S. over an extended mile at Epsom in June, he was forced to carry a five-pound penalty for the latter as did his chief rival Arab Spring as they took on some Polytrack specialists here. Restrained to race in fourth by Andrea Atzeni, he was sent up the inner to gain a slight edge over that adversary with a half furlong remaining and was pushed out to secure an ultimately cozy success. Harry Charlton, the trainer's son and assistant, was on hand to say, “He'll take a bit of stopping in the [G3] Winter Derby. The other option is the Jebel Hatta [at Meydan] on March 4. It's a prep race for the [G1] Duty Free on Dubai World Cup night. Depending on how the Jebel Hatta went, you could consider running in the Duty Free. That's quite a valuable proposition for a Galileo entire, who is very closely related to Gleneagles.”
Decorated Knight's connection with the high-class miler Gleneagles (Ire) comes via their second dam Mariah's Storm (Rahy), winner of the GII Turfway Park Budweiser Breeders' Cup S. and GII Arlington-Washington Lassie S. among others. Her lasting legacy, of course, is giving the world the stoically brilliant Giant's Causeway as well as a talented full-sister to the “Iron Horse” in the G2 Cherry Hinton S. and G3 Swordlestown Stud Sprint S. winner You'resothrilling. As well as Gleneagles, the latter produced another Irish Classic scorer in Marvellous (Ire), also by Decorated Knight's sire Galileo, while her 2013 foal Coolmore (Ire) carried the heavy burden of her title with some aplomb by capturing the G3 C.L. & M.F. Weld Park S. and filling third spot in last year's GI Belmont Oaks Invitational S. Also linked to the G2 Great Voltigeur S. winner, G1 Irish Derby runner-up and G1 Epsom Derby third Storm the Stars (Sea the Stars {Ire}), Pearling has a 2-year-old colt by Dansili (GB) to come.