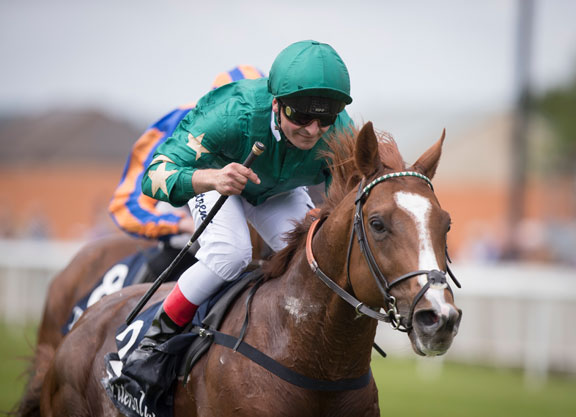 Decorated Knight (GB) (Galileo {Ire}, who ran sixth in the Mar. 25 G1 Dubai Turf after annexing the Mar. 4 G1 Jebel Hatta at Meydan, returned to European action in Sunday's G1 Tattersalls Gold Cup at The Curragh and provided a third win for trainer Roger Charlton with a determined display. Positioned third in the wake of the pacesetting Success Days (Ire) (Jeremy) after the initial exchanges, the 7-2 favourite emerged from cover to challenge soon after passing the quarter-mile marker and kept on strongly once taking control approaching the final eighth to hold the late threat of recent G1 Lockinge S. fourth Somehow (Ire) (Fastnet Rock {Aus}) by 1 1/4 lengths. Somehow's stablemate Deauville (Ire) (Galileo {Ire}) finished 2 1/4 lengths further back in third. “We were a bit worried about the ground as it's on the slow side of good and a bit tacky, but [trainer] Mr [Roger] Charlton was very positive about him,” explained winning rider Andrea Atzeni. “He travelled beautifully through the race and won cosy in the end. He has a high cruising speed and a good turn of foot.”

Decorated Knight registered a first black-type success in the Listed Festival S. at Goodwood on this weekend last year and followed up with a second in Epsom's June 3 G3 Diomed S. before regaining the winning thread in Leopardstown's July 14 G3 Meld S. in his first overseas foray. The chestnut was slated to contest the Aug. 13 GI Arlington Million, but was a late scratching due to injury and was on the shelf for the remainder of last term. He returned to claim Lingfield's Feb. 4 Listed Winter Derby Trial en route to Meydan where he registered a career high in the Mar. 4 G1 Jebel Hatta before posting a last-out sixth in the Mar. 25 G1 Dubai Turf. “I was very worried when I saw the ground yesterday and I knew the forecast was for heavy showers yesterday, but not like an inch or whatever they had,” said trainer Roger Charlton. “I thought we'd come and have a look and decide today so I walked the course and was very pleasantly surprised how good it was. The surface was a bit dead, it's good to soft, but they opened up a new strip and the course is in fantastic condition. He doesn't have to have rattling quick ground and has improved and improved. The Group 1 race he won in Meydan wouldn't have been the strongest race and this is a stronger race. If Minding had turned up it would have been a different story, but he won with his ears pricked and was pulling up in front. When Somehow came to him he picked up again and he can't do more than that. He got a nice lead and came at the right time. It was perfect and the race worked out well. They didn't actually go a very strong gallop and it was handy to be close to it. He has a very classy pedigree and is a very close relation to Gleneagles and his dam is a sister to Giant's Causeway so he has a stallion career.”