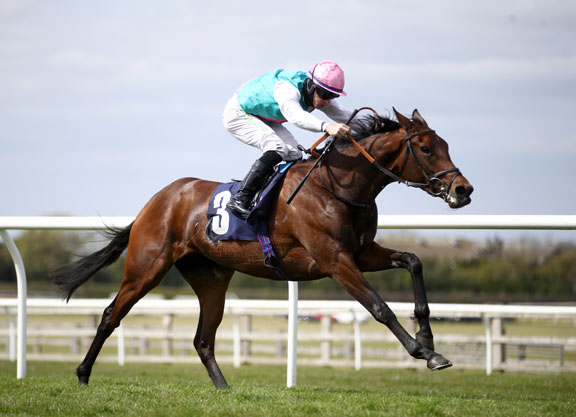 Wetherby is an unlikely place to unearth a TDN Rising Star, but the Yorkshire venue more accustomed to hosting jumps meetings acted as the stage for the re-entry of a potential top-class filly on Sunday as Juddmonte's regally-bred Noon Star (Galileo {Ire}) took the opening 10-furlong Racingtv.com Fillies' Novice S. Last seen winning over an extended mile at Nottingham in October, the Sir Michael Stoute-trained daughter of the celebrated Midday (GB) (Oasis Dream {GB}) and full-sister to the G3 Sandown Classic Trial winner Midterm (GB) was under a seven-pound penalty tracking the early pace. Committed by Richard Kingscote with two furlongs remaining, the 4-5 favourite drew away to win by 2 1/2 lengths from the Gosden trainee Loving Dream (GB) (Gleneagles {Ire}), with six lengths back to that rival's stablemate Franklet (GB) (Frankel {GB}) in third. “She's a lovely-bred filly who has done everything right so far and learnt each time,” her rider commented of the G1 Epsom Oaks-entered winner, the sixth foal of the multiple group 1 winner who looks certain to throw one of her ilk at some point. “She's a very laid-back filly in all her work and very responsive at the racecourse. She does as she's asked and is a very straightforward, very sweet filly. I'm sure connections will ponder the Oaks and she is bred to go that way.”

Winning this race which also played host to the subsequent G2 Hardwicke S. winner Fanny Logan (Ire) (Sea the Stars {Ire}) two years ago, Noon Star who had caught the eye when third on debut over seven furlongs at Salisbury in September has a headstart on her dam in terms of the wins-to-runs ratio. Midday took three starts to break her maiden before slowly entering the stratosphere with a trio of triumphs in the G1 Nassau S. and wins in the G1 Yorkshire Oaks, G1 Prix Vermeille and GI Breeders' Cup Filly and Mare Turf. Her first foal, the aforementioned Midterm, flashed talent for this stable and was an ante-post favourite for the Derby but failed to hit those heights. Successful in the G3 N E Manion Cup, GSW-Aus, GSW-Eng, GSP-Fr, $375,077, he was followed the next year by the filly Mori (GB) (Frankel {GB}) who also won a Classic trial in the Listed Height of Fashion S. but did not make the Oaks and was second in the G2 Ribblesdale S., SW & GSP-Eng, $101,596.

Midday is a half-sister to Sun Maiden (GB), another daughter of Frankel who took the G3 Hoppings S. and was third in the G1 QIPCO British Champions Fillies & Mares S., G2 Ribblesdale S. and G2 Middleton S. for this stable, the G3 Nell Gwyn S. scorer and G1 Nassau S. third Hot Snap (GB) (Pivotal {GB}) and to Midsummer Sun (GB) (Monsun {Ger}) who was a listed winner and twice group 3-placed in Australia. Two other members of this esteemed dynasty are the G1 Eclipse S. and G1 Phoenix Champion S.-winning sire Elmaamul (Diesis {GB}) and Reams of Verse (Nureyev), who captured the Epsom Oaks 25 years ago. Midday's 2019 colt High Moor is by War Front, while she also has a 2021 daughter of Shamardal.