Galileo's Circus Maximus Gets Ballydoyle Off the Mark At Royal Ascot 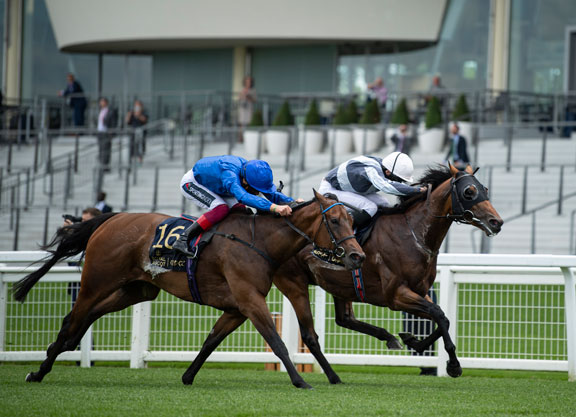 Royal Ascot's week-long Ryan Moore-Frankie Dettori battle was underway in some style early on Tuesday, with the former prevailing in a thrilling tussle on the 4-1 favourite Circus Maximus (Ire) (Galileo {Ire}) in the G1 Queen Anne S., a “Win and You're In” for the GI Breeders' Cup Mile at Keeneland in November. Sent straight to the fore, last year's G1 St James's Palace S. and G1 Prix du Moulin de Longchamp hero was passed and apparently beaten by Terebellum (Ire) (Sea the Stars {Ire}) as Frankie took charge 1 1/2 furlongs out. As he proved on more than one occasion last term, Circus Maximus is never happier than when engaged and his rally was strong enough to get the better of the filly in the shade of the post. Just a head separated the pair at the line, with the forwardly-ridden Marie's Diamond (Ire) (Footstepsinthesand {GB}) three lengths away in third as the closers failed to make an impact. “He's a very straightforward horse and they had their chance to come and beat him,” Moore commented after signalling instant intent to regain the jockeys' title he surrendered to Dettori 12 months ago. “He fought all the way to the line and just a really good horse.”

Providing Aidan O'Brien with a 71st Royal winner, Circus Maximus is from the mould of a Giant's Causeway or Rock of Gibraltar (Ire), a familiar tough and hardy campaigner who thrives on the Ballydoyle routine. Considered a middle-distance prospect following his juvenile season which saw him finish third in the G3 Autumn S. and fourth in the G1 Vertem Futurity Trophy, the bay did nothing to dissuade that view with a game return win in the 10-furlong Listed Dee S. at Chester last May. Sixth in the G1 Epsom Derby, he surprised when successfully making the quick and drastic reversion to a mile which Marju (Ire) and Dawn Approach (Ire) had done in the past to garner the St James's Palace on similarly rain-eased ground.

Second to Too Darn Hot (GB) (Dubawi {Ire}) as that rival gained revenge following their prior encounter at the Royal meeting in the G1 Sussex S. at Goodwood at the end of July, the Niarchos colour-bearer was seventh but not disgraced in the G1 Juddmonte International back up in trip the following month. Reverting to a mile again for the Prix du Moulin, he was allowed to keep that race despite some controversy as he made contact with the G1 Prix Jacques le Marois hero Romanised (Ire) (Holy Roman Emperor {Ire}) in another tight battle. Sent to Santa Anita afterwards, he was racing outside of his comfort zone in the sharp test of the GI Breeders' Cup Mile on fast ground, but showed his usual tenacity to be fourth.

Sent forward here as he had been on the round course 12 months ago, Circus Maximus found a lead from the stand's-rail runner Marie's Diamond and was only beginning to work up to his top rhythm at the two-furlong marker while Terebellum arrived swinging to his right. Frankie's mount had a distinct edge soon after and looked to have left him behind, but as the line neared she failed to put significant distance between them which only served to spur on the Ballydoyle raider. Fully motivated, he managed to find the line in time, an artform that his trainer's first Royal Ascot group 1 winner Giant's Causeway first demonstrated almost exactly 20 years to the day in the St James's Palace.

This win puts Circus Maximus in elite territory as only the third St James's Palace winner in recent times to return and take this prize after Canford Cliffs (Ire) and Frankel (GB). Aidan O'Brien, who was on 71 Royal winners after this, said, “We were delighted with that performance. Circus Maximus is very tough, he travels with a lot of speed, then quickens and toughs it out. It was unbelievable, really. Ryan gave him an unbelievable ride and we are delighted.”

“Royal Ascot is usually a very busy week for us as we go back and forth, so it is brilliant to be able to see all the preliminaries,” added the Ballydoyle handler from his home. “It is great for us and we get to see a lot of stuff that we otherwise wouldn't. We have got a great team of people to do everything when we are not there and we couldn't be happier really. Pat Keating and the lads bring them to the races and the lads fly them over, so it's a great team of people and they are all working together. We are so lucky to have so many special people really.”

“Circus Maximus is a trademark Galileo. I think he has probably been a bit underestimated. He is a very solid horse and all his best form has been over a mile and that makes him all the more valuable and interesting. He travels very strongly and then loves getting eyeballed. The problem is he is lazy and that is why he wears blinkers. It is only when the tempo is really high that he actually races, so I think a mile-and-a-quarter and mile-and-a-half trips don't allow him to focus. The pace of the mile races allows him to get his blood up.” A return to Goodwood is on the cards now. “I would say the Sussex Stakes is the race for him. He is very comfortable racing around a bend.”

John Gosden's decision to run Terebellum over a mile paid off and the runner-up emerges with real credit, especially as she was free in the early stages. “She ran a great race. They didn't go any pace which probably played against her, as she gets a mile and a quarter,” he said. “She hit the front and the other one just came back on the run to the line under a rousing ride.”

Circus Maximus is unfortunately the only known foal out of Duntle (Ire) (Danehill Dancer {Ire}), who took the G2 Duke of Cambridge S. and Listed Sandringham H. over this straight mile at this meeting before being denied her group 1 win in the 2012 Matron S. by the stewards. Also successful in the G3 Desmond S., G3 Amethyst S., runner-up in the G1 Prix Rothschild and third in the G1 Sun Chariot S., the Airlie Stud-bred chestnut was a rare commodity and an inspired purchase by the Niarchos Family.