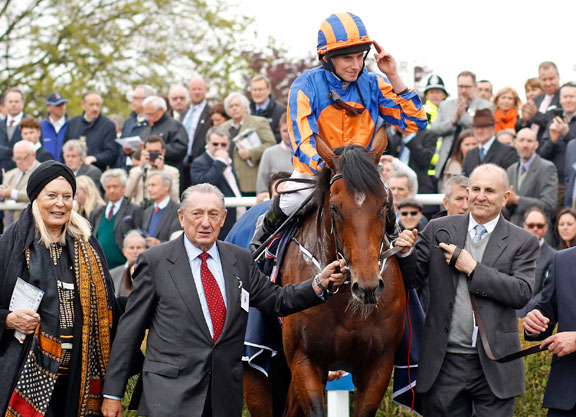 Sweating notably before the off, Churchill (Ire) (Galileo {Ire}) stayed cool enough on Newmarket's Rowley Mile to deliver as the 6-4 favourite and gain a record eighth G1 Qipco 2000 Guineas for Aidan O'Brien. As he had when successful in the G1 Dewhurst S. here in October, the imposing bay tracked the pace closely travelling strongly and when sent to the front with a quarter mile remaining pulled out just enough to prevail by a length from Barney Roy (GB) (Excelebration {Ire}), with a neck back to Al Wukair (Ire) (Dream Ahead) in third as the field finished in a bunch. Ryan Moore was smitten afterwards and said, “He's such a lovely horse and is never going to be ultra-impressive, but there is so much power there and he has a magnificent mind. He has everything you want in a racehorse–he travels, he's got speed and loads of class and is the most beautiful horse you'll see. In the race he was always very comfortable, even though he was there a little bit early. He always feels like there's more when you ask him.”

Aidan O'Brien's ninth juvenile champion colt in the international classifications, Churchill had given what was required in a string of staging posts beginning when breaking his maiden at Royal Ascot in the Listed Chesham S. in June. Narrowly on top in the G3 Tyros S. at Leopardstown in July before extending his winning margin to two lengths in the G2 Futurity S. at The Curragh in August, he scored by 4 1/4 lengths from the non-stayer Mehmas (Ire) (Acclamation {GB}) back at the latter track in the G1 Goffs Vincent O'Brien National S. in September prior to his champion status-sealing Dewhurst win which ensured he was a short-priced favourite for this Classic all winter.

Proof that he was doing all the right spring preparatory work in Co. Tipperary came with the stability of his ante-post tag despite the exploits of Al Wukair, Eminent (Ire) (Frankel {GB}) and Barney Roy throughout April, but there had to be a sense that he was vulnerable to at least one of these improvers. This renewal was understandably elevated above recent ones beforehand with the three impressive trial winners all looking to have much more to give and there was a distinct air of excitement among the inflated Newmarket crowds. Far from distinguishing themselves as a class apart, the big four actually never got fully away from some outsiders including the 100-1 shot Top Score (GB) (Hard Spun) who was less than four lengths back in seventh with the Dewhurst runner-up Lancaster Bomber (War Front) bang there until very late on and beaten under 1 1/2 lengths in fourth. Churchill had decided the Dewhurst with a surge before going through the motions in the closing stages and it was the same story here as Ballydoyle once again exercised their stranglehold on another of the major European races.

Keen initially as Lancaster Bomber and the other Ballydoyle representative Spirit of Valor (War Front) played bodyguard in front and alongside with the outsider Law and Order (Ire) (Lawman {Fr}) helping to force the pace, he quickly settled into his customary rhythm. As a perfect opening came nearing the two-furlong pole before the rail cut-away, Moore was committed to go then despite the fact that the move would leave him in front plenty soon enough. Eminent made a brief attack as the favourite seized the advantage towards the roaring stands, while Gregory Benoist was just getting Al Wukair into gear having given the French raider a confident ride towards the back and Barney Roy was also coming through the pack. From the furlong pole it was sealed with Churchill coming up the rail alone to reward the tactical nous of connections.

Ryan Moore was not keen to play down his Derby prospects and said, “Through the race he always filled me with confidence and he has improved with every run and beaten the best there was at two and I think he'll keep on performing. As soon as you get on him, you feel you are on a different type of horse and he floated down to the start. I think a lot of him and let's hope he keeps on. His dad won a Derby, but I wouldn't say a decision on that will be made straightaway. I doubt there'd be a better ride at Epsom.” Aidan O'Brien was also non-committal about the June 3 blue riband. “We were worried as it was his first time back and he's a big horse who we knew would come on a good bit,” commented the Ballydoyle handler after this record-breaking achievement. “Donnacha does all the work on him and was very happy with him, as were all the people around him, so that gave us the confidence to come. Ryan said if the pace wasn't fast he would be handy and if it wasn't he'd drop back. He was always a big, mature horse last year and he has an unbelievable mind. He was in no way anxious about anything when we tacked him up and was confident. What route he'll go, I'm not sure but he'll get a mile and a quarter. Whether he gets a mile and a half, I don't know but he could go down a lot of roads. He is very relaxed and will probably get as far as you want him to get–he has speed as well, but he has a very relaxed way of racing. He is by Galileo and horses by that sire very rarely lack stamina.”

Godolphin's John Ferguson was satisfied with the effort of the runner-up Barney Roy, who was notably keen throughout the early stages. “I am delighted with the way he has run. He was only having the third race of his life and he has performed exceptionally well and I can't say more than that,” he said. “Sheikh Mohammed's first reaction was that he is probably a horse for the [G1] St James's Palace Stakes [at Royal Ascot June 20]. The thing to remember is this was his second run this year. He has had two quick runs and three in total and he has performed like a top-class racehorse, so there is lots to look forward to.”

Al Wukair was also meeting with defeat for the first time and could have benefitted from a stronger pace to run at, as he had to come around rivals when the pace was quickening up ahead. Harry Herbert, racing manager for Al Shaqab Racing, said, “It was a fantastic race and a great effort from Al Wukair. Andre [Fabre] and Gregory were just frustrated that the pace was so slow and we had to come out wide, which was a bit frustrating. But it shows what a good horse he is and a very exciting animal to go to war with this year. Hats off to the winner who is a hell of a horse, but in a fast-run race, it would be interesting. We will talk to Andre, but I suspect he will go to the St James's Palace. We will let the dust settle.”

Churchill's dam had the pace to be runner-up in the five-furlong G2 Queen Mary S., which was no surprise given that her dam was the 2-year-old and 3-year-old highweight sprinter Airwave whose stellar career was highlighted by wins in the G1 Cheveley Park S. and G2 Temple S. and placings in the G1 Golden Jubilee S. and G1 July Cup. She was stretched out to a mile by Aidan O'Brien after he had taken over from Henry Candy and captured the G2 Ridgewood Pearl S., which gives some hope that Churchill will stay at least 10 furlongs. Airwave's daughter by Galileo named Aloof (Ire) won over an extended nine furlongs in the G3 Denny Cordell Lavarack & Lanwades Stud Fillies' S. and was second in the 10-furlong G3 International S. Despite that, the family is predominantly about speed with Airwave's half-sister Jwala (GB) (Oasis Dream {GB}) springing a surprise in the G1 Nunthorpe S. over five. Next up from Meow are a 2-year-old filly named Clemmie (Ire) and a yearling colt also by Galileo.