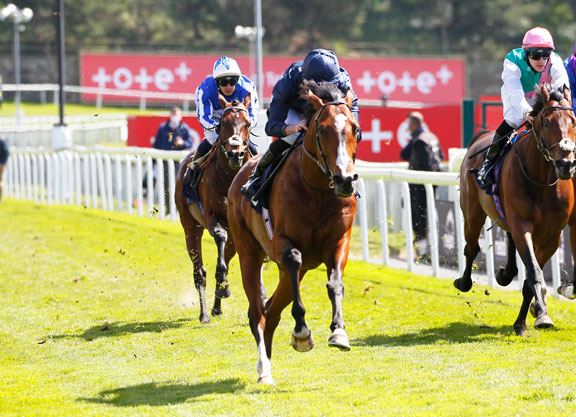 Like Japan (GB) (Galileo {Ire}) on Thursday, Ballydoyle's Armory (Ire) (Galileo {Ire}) also got his campaign off to a flyer on Chester's “Roodee” 24 hours later with a smooth success in the G2 Melodi Media Huxley S. Settled last of the four who tackled the extended 10-furlong contest, last year's G3 Royal Whip S. winner, G1 Cox Plate runner-up and G1 Irish Champion S. third swept around the outside to take over a furlong out en route to a three-length defeat of Sangarius (GB) (Kingman {GB}). “He is a very good colt with a lethal turn of foot,” Ryan Moore said of the 6-5 favourite. “It was a steady pace and a messy race, but he has such a big change of gear he could overcome that.”

One of the best of his stable at two, Armory had won Leopardstown's G3 Tyros S. and The Curragh's G2 Futurity S. and placed in the latter venue's G1 Vincent O'Brien National S. and G1 Prix Jean-Luc Lagardere at ParisLongchamp. Fourth in the G1 Irish 2000 Guineas back at The Curragh last June and in the G1 Tattersalls Gold Cup also there in July, the bay has turned things around from that point and Aidan O'Brien is confident there is more to come. “He's really matured and has an unbelievable turn of foot,” he said. “He's done very well over the winter, he had a lovely run in Australia last year but things didn't really work out for him so we're delighted. We were thinking after this he might go for the [May 23 G1] Tattersalls Gold Cup or the [June 16 G1] Prince of Wales's [at Royal Ascot], but probably the latter. He has plenty of pace, but we always thought he'd get 10 furlongs.”