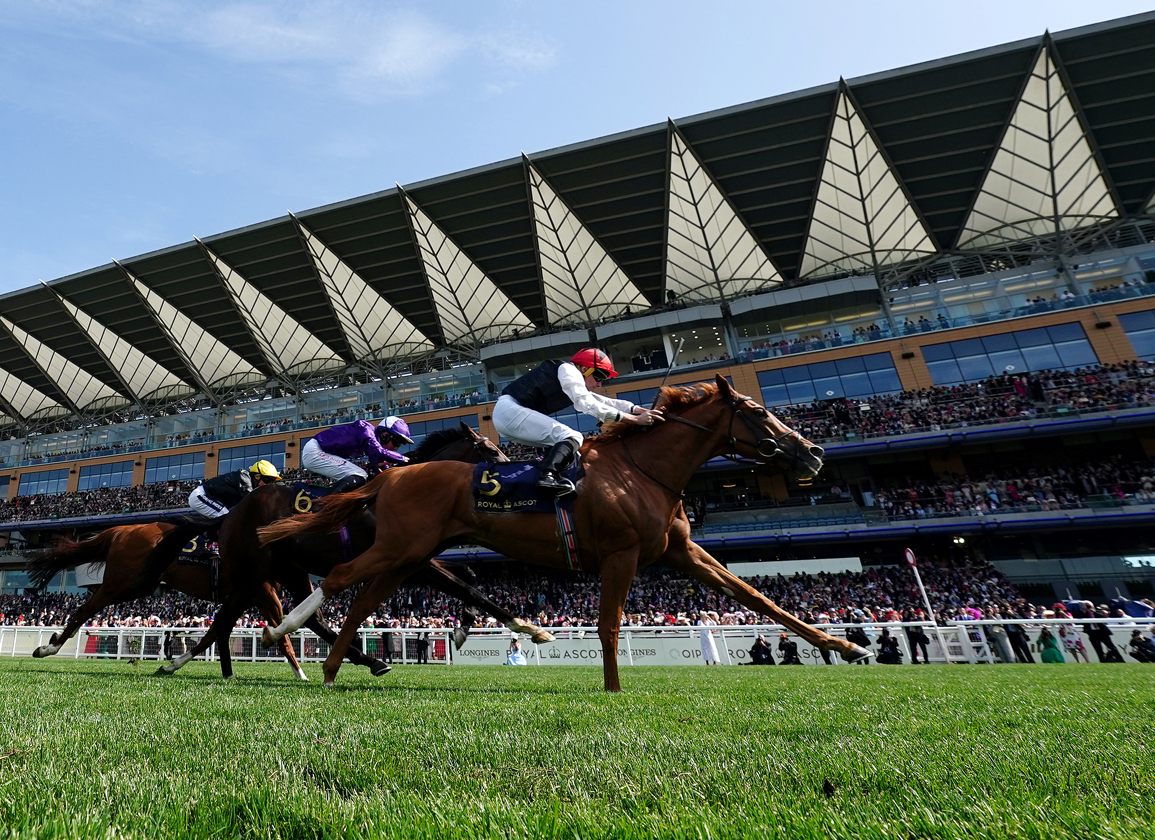 Thursday's G1 Gold Cup maintained its place at the heart of Royal Ascot with a thrilling and dramatic finale as Kyprios (Ire) (Galileo {Ire}) and Ryan Moore outgunned Mojo Star (Ire) (Sea the Stars {Ire}) and Stradivarius (Ire) (Sea the Stars {Ire}), with the latter falling foul to ill fortune for the second consecutive year. Sent off the 13-8 favourite on the back of his wins in Navan's Listed Vintage Crop S. Apr. 23 and Leopardstown's G3 Saval Beg Levmoss S. May 13, Kyprios who represents the consortium of Moyglare Stud, whose colours he sports, and messrs Magnier, Tabor, Smith and Westerberg was held up in mid-division early out wide and out of trouble. It was a typical Gold Cup without much movement until the scramble out of the back straight and with Frankie panicking into angling off the rail he ended up nine-wide in the run for home as the Ballydoyle representative stayed on past Mojo Star in the final 150 yards. At the line, Kyprios had the measure of Amo Racing's seasonal debutante by half a length, with 3/4 of a length back to Stradivarius who paid for the errant passage he was forced to take.

Ryan Moore revealed it was far from straightforward afterwards. “It wasn't a nice race to ride,” he said. “I had to move him to the outside and I don't like doing that, but I felt I had to keep Kyprios going. Mojo Star has come to us, but this fella kicked in then and it was comfortable at the line. It wasn't a true test today and I don't think we saw the best of him. It was a more complicated race than it should have been and I think he was much the best. To be fair, Aidan had him earmarked for this a year ago! He knows what he is looking for and identified the right horse in him and it all worked out right.”

Kyprios was burying the memories of his three prior unhappy visits to this country, which had resulted in well-beaten efforts in the 2020 G3 Zetland S. and Listed Lingfield Derby Trial last May and an injury sustained in the stalls before this meeting's G2 Queen's Vase. Unbeaten in Ireland and still a lightly-raced project, the chestnut was tardy from the gates here and possibly further back than Moore would have wanted as Earlofthecotswolds (Fr) (Axxos {Ger}) enjoyed an easy time in front but it was Dettori who had the real issue as Stradivarius was hemmed against the rail and essentially trapped.

As Moore wound up the eventual winner approaching the home bend, Stradivarius was caught behind a wall and as he took a diagonal path to daylight the Willie Mullins raider Burning Victory (Fr) (Nathaniel {Ire}) loomed full of running up the inside route he could have enjoyed had Frankie held his nerve. Mojo Star looked to have pulled off a remarkable training performance from Richard Hannon until deep inside the last furlong, but Kyprios was too strong for a record eighth Gold Cup for Aidan O'Brien. “The horse was very brave,” he said. “We brought him here last year, but he came out underneath the stalls and his back was badly bruised and he didn't get to race any more. He missed the St Leger, so it was always the plan that we would train him with this race in mind and give him two preps for it.”

“He had the same tenacity that he showed all the other times and Ryan was very strong on him. It was great Stradivarius was here–it makes these races even more special and incredible. Kyprios is light-bodied and a good mover who looks after himself and they are all the things that he will need. He did it today and hopefully he can do it in the years to come. He could go to Goodwood next or something like the Irish St Leger.”

Richard Hannon said of Mojo Star, who came so close to emulating Le Moss (Ire) in winning this on his seasonal bow, “The Gold Cup next year will be the plan. He's very manoeuvrable. He can go back to a mile and a half and, now he gets two and a half miles, anything in between. I worked him with my milers–with Lusail and Chindit at Kempton and I thought he might have worked the best and wondered if he ought to be in the Queen Anne, or something! I thought then he might run a big race if he got the trip and he got the trip. It is gutting, it really is galling. We've had too many seconds this week, but it will come. The horse is a real pleasure to be associated with, and his day will come. He's been second in three group ones, now–Derbys, St Legers, Gold Cups; there aren't many of them.”

Reflecting on the deflating experience of watching helpless as Stradivarius became the victim of circumstance once again, John Gosden said, “I was bit surprised from having been in the box seat that we dropped back so far. The problem is when they sprint, you had to come wide to get a run and he had to come widest of all. He had a chance the last furlong and the race slipped on him as they had gone a steady pace. Stradivarius is a great horse to get here and to now run in five Gold Cups–to have the longevity he has had. He came back in and had a neigh, so he seems happy. Great credit to the horse and the owner-breeder to keep him racing. There are younger horses there that are first and second. I just wish we had been a little handier and not had to go through a wall of horses.”

Dettori added, “The younger horses had more legs than me at the end. I had every chance to get them, but they were stronger than me. He's been a great hero and came out flying. I had to pull out wide and the only place I could go was the outside and everything was getting tight. When I've pulled him out plenty of times, usually he's got the electric turn of foot, but he's not four anymore, he's eight. I laboured a bit at the end and I was never going to get them. He has been a star. You have to pass on the baton to the younger ones. He did his best and we're very proud of him.”

⚫️⚪️🔴 Kyprios keeps the good times rolling for Moyglare Stud, who co-own this horse with Westerberg, Tabor and Smith, by taking the Gold Cup. Stradivarius finishes third but there were some traffic issues. Would he have won with a clear run? 🤔pic.twitter.com/wpoDFph9La