Galileo and Pharoah in Transatlantic Trade 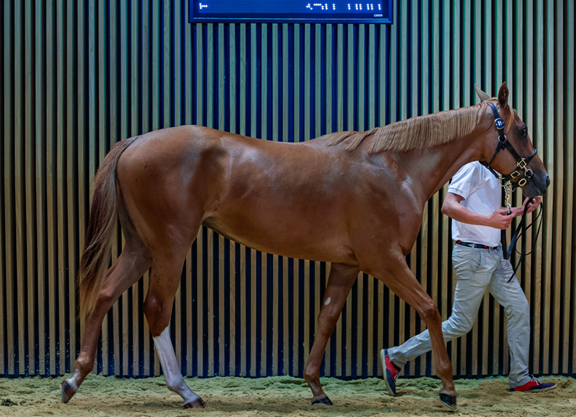 DEAUVILLE, France—Galileo (Ire) recently surpassed his own great father Sadler’s Wells at the head of the all-time sires’ list of European Pattern winners and his international allure shows no sign of abating with his Arqana session-topping daughter set to be trained in America by Mark Casse.

Eric Puerari and Michel Zerolo’s Haras des Capucines consigned the filly (lot 51) from the Dayjur mare Tender Morn on behalf of breeders Lynch-Bages and Rhinestone Bloodstock and she quickly leapt past the previous high set by the first yearling by American Pharoah to be sold in Europe, reaching €810,000 by the time the gavel fell in favour of Justin Casse.

“She’s from a very good family with a lot of quality and a decent amount of substance for a Galileo,” said the agent. “Every time I went back to see her she was the same horse. Her temperament is excellent.”

Aidan O’Brien arguably knows more about Galileo than anyone in the bloodstock industry and it is this quality—as vital as pedigree and conformation—to which he regularly points when discussing the stallion’s phenomenal record at stud.

At his esteemed level, Galileo serves some of the best mares in Europe and beyond and a previous tryst with the listed-placed Tender Morn has already produced last year’s juvenile Group 3 winner Kenya (Ire). The 20-year-old Wertheimer-bred mare is also the dam of the G3 Prix d’Aumale winner Zantenda (Ire) (Zamindar) and of the stakes-placed Single (Ire) (Singspiel {Ire}) and Elusif (Elusive Quality).

“She has been wonderful to deal with and so calm throughout the sale,” said Puerari. “She has displayed all of the class associated with her sire and we feel privileged to have such a Classic type of filly to consign for our clients.”

Galileo’s name was prominent on the leader board from the outset on Saturday evening with the first yearling in the ring, a daughter of Galileo (Ire) out of the treble Grade 2 winner Naissance Royale (Ire) (Giant’s Causeway) (lot 1) selling to Emmanuel de Seroux of Narvick International for €600,000. The agent couldn’t name his client but confirmed that the filly will leave her Normandy home to travel to Japan.

An American Classic
This sale gains a lot of its character as the first platform for good physicals by rookie sires, but lot 34 brought a genuine sense of history into the ring as a debut sale for American Pharoah (Pioneerof The Nile) in Europe. The first Triple Crown winner in a generation retired to Ashford at $200,000 but has nonetheless been processing his opening crop of yearlings, in his homeland, at an average treble even that fee at $601,846.

American Pharoah has a number of turf strands in his pedigree and he will certainly be given plenty to work with, for the European environment, by the Barronstown Stud mare Shawara (Ire) (Barathea {Ire}), whose striking daughter—nicely developed for a May foal—was presented here by Haras d’Etreham. A listed winner herself, she comes from an Aga Khan family extending half a dozen generations and counts dual Group 1 winner and Arc runner-up Shareta (Ire) (Sinndar {Ire}) among her previous foals.

While a relative newcomer to the elite bloodstock scene, Phoenix Thoroughbreds, pushed him hardest, M.V. Magnier was not to be denied at €750,000. Magnier, of course, represents the organisation that stands American Pharoah—and afterwards made an impressive declaration of the team’s faith that this could be a horse of genuine global stature.

“My grandfather founded Ballydoyle on American dirt horses—that’s where Galileo comes from, that’s where Sadler’s Wells came from,” he said. “It all goes back to the American Classic horse. And we strongly believe in American Pharoah. He really could be the next big thing. Be it him, or Justify (Scat Daddy), we think that a horse of that type can once again have a transforming impact on European bloodlines.

“So that’s what we want to do: to get the best American Pharoahs we can, put them in Ballydoyle, and try to make him a new Northern Dancer. Remember Scat Daddy was an all-American hero, too, and look what he has been able to do on turf in Europe.

A second filly by the sire goes under the hammer in the second session as Lot 158.

Magnier stepped in to back another young stallion on the firm’s roster when giving €560,000 for Lot 22, a colt by Camelot (GB) (Montjeu {Ire}) presented by Anna Sundstrom of Coulonces. Camelot, of course, is a couple of steps ahead of American Pharoah, with his first crop now 3-year-olds and excelling, much as expected, with time and distance (notably in the form of Irish Derby winner Latrobe {Ire}). And this colt is out of the MSW Rock My Soul (Ire) (Clodovil {Ire}), whose son Young Rascal (Fr) (Intello {Ger}) graduated from this sale in 2016—a €215,000 pick for Stroud Coleman—to win the G3 Chester Vase in May for William Haggas.

“He’s a brother to a good horse, a very good mover, and Camelot’s absolutely flying at the minute—be it colts or fillies,” Magnier reasoned. “He looks like he has some good ones coming through among the 2-year-olds as well. So let’s hope he’ll be another.”

Monceaux Marches On
With 15 lots sold throughout the opening session for €5,305,000, Ecurie des Monceaux was in its customary position at the head of the vendors’ list by the end of day one.

Naissance Royale’s Galileo filly wasn’t the only member of the draft to reach €600,000 with the Frankel (GB) colt out of listed winner Sabratah (GB) (Oasis Dream {GB}) attracting a matching bid from Oliver St Lawrence standing with Bahraini owner and trainer Fawzi Nass.

“He’s a lovely big scopey horse, a staying model who is still quite unfurnished at present. He’ll go to England to be trained by George Peckham,” said St Lawrence of lot 26, a half-brother to the dual winner Muttrah Fort (GB) (Dubawi {Ire}).

Michel Zerolo and Stephen Hillen were both in hot pursuit of a Dark Angel (Ire) colt in the Monceaux draft (lot 55) and it was the latter who prevailed, offering €450,000 for the half-brother to listed winner Deemster (Ire) (Invincible Spirit {Ire}) and to G2 Prix Daniel Wildenstein runner-up Buthela (Ire) (Acclamation {GB}). The son of French listed victrix Tribune (Grand Slam) will be trained in Chantilly.

Hillen said, “He has a good physical and is very much in the mould of the sire. He behaved beautifully in the ring, and obviously the record of Ecurie des Monceaux is second to none. He will be trained by Henri-François Devin for a new client.”

Zerolo did however have the final say when it came to the colt with one of the freshest updates in the book, the Charm Spirit (Ire) half-brother to last Saturday’s Beverly D S. winner Sistercharlie (Fr) (Myboycharlie {Ire}).

Peter Brant is no stranger to buying in Europe, and indeed he bought Sistercharlie after her victory in last year’s G3 Prix Penelope for Alex Pantall. Now trained in America by Chad Brown, the filly is a treble Grade I winner on turf and her half-brother by Siyouni (Fr), now named Sottass (Fr) was bought at this same sale last year for €340,000. Brant has now added a third member of the family to this string, going to €400,000 for lot 43 through Zerolo’s Oceanic Bloodstock.

“The dam has obviously proved that she is a tremendous breeder. This colt will go into training with Jean-Claude Rouget like his year-older half-brother who is set to make his racecourse debut on Tuesday. We have high expectations for him,” said Zerolo.

Muhaarar was priced with conspicuous fairness when retired to Shadwell, at £30,000, and his first foals sold very well last autumn. Having started out at twice that sum, the two most expensive European sires of their intake, Golden Horn (GB) (Cape Cross {Ire}) and Gleneagles, will have to work harder to pay their way. But collectively they made a solid enough start here.

Just to get seven yearlings into a boutique sale like this was another feather in Muhaarar’s cap, six of them concentrated in this opening session. With one scratched, he found new homes for four of the five into the ring at an average of €277,500—headed at €420,000 by lot 16, Monceaux’s half-brother to Irish Oaks winner Chicquita (Ire) (Montjeu {Ire}) and G2 Ribblesdale S. winner Magic Wand (Ire) (Galileo {Ire}) out of the Listed winner Prudenzia (Ire) (Dansili {GB}).

David Redvers acquired this colt on behalf of Qatar Racing. “He’s a very athletic horse with a stallion’s pedigree, and that’s what we’re all after,” he said. “We’re trying to buy a few colts, to fill a few gaps in the racing programme, and—as usual—he’s a credit to the stud he’s come from. The pedigree is a mix, so you have to hope it’s one that will mix well.”

His overall impression of Shadwell’s champion sprinter has been most positive. “I think they’re very strong, sprinter-topped horses with great actions,” he said. “We’ve some nice [Muhaarar] foals at home, and of course there were a lot that sold very welI last year. But I thought this was the pick of those here, on pedigree anyway.”

Monceaux also made sure Gleneagles landed running, gaining €400,000 from Gatewood Bell for lot 8. Admittedly this filly benefited from one of the best updates of the catalogue as a half-sister to Intellogent (Ire) (Intello {Ger}), who recently confirmed himself one of the best 3-year-olds in France when winning the G1 Prix Jean Prat.

Bell was acting on behalf of Everett Dobson, for whom he bought Mastery (Candy Ride {Arg}). “She’s a half-sister to a Group 1 winner by a young stallion I really like,” Bell said. “She will start in Europe before heading to America if she proves good enough.”

Gleneagles also commanded €170,000 for a filly late in the session, and has four more chances today. All three of Golden Horn’s offerings in the session meanwhile left the ring at €200,000, two sold but one still short of his reserve; he has four more catalogued today.

Gold Medal For Sun Stud
Even American Pharoah could not dislodge Medaglia d’Oro (El Prado {Ire}), a sire who has gone out there and got the results on the track, from top billing at Saratoga earlier this month. The Jonabell stallion has achieved results on all surfaces and there was corresponding international interest in his sole entry in this sale, lot 25, a colt out of dual Grade III winner (and Grade I-placed) Rusty Slipper (Lemon Drop Kid) from a family full of black-type—not least through the dam’s half-sister, who produced Wicked Strong (Hard Spun) to win the GI Wood Memorial S.

Sure enough, the winning bid of €340,000 traced to a cosmopolitan outfit in Sun Bloodstock. “I’m not sure where he’ll go to be trained, we’ll see how we’ve done at the end of the sale and what things look like then,” said David O’Callaghan. “But this was just a nice horse with a good pedigree who looks a fairly useful fit: he could go anywhere, Australia included. But only if he can run fast.”