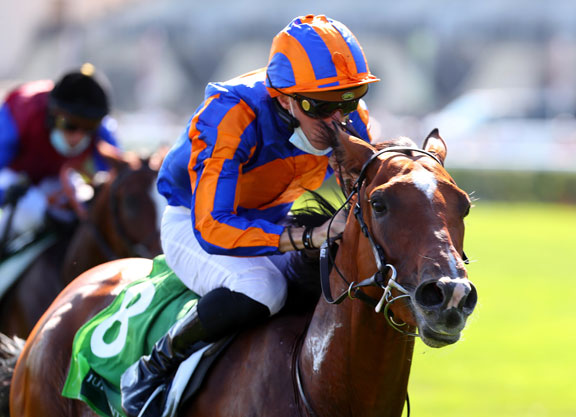 Mogul, one of the O'Brien horses withdrawn from the Arc | Scoop Dyga

After a weekend of intensive testing of GAIN's equine feed ranges, batches and individual ingredients, progress has been made in the investigation into the presence of Zilpaterol in the contaminated feeds, the company announced late on Monday evening. The synthetic beta-agonist Zilpaterol, approved for use as a performance-enhancer in some beef production systems outside the EU, was found in some positive tests on horses that had consumed GAIN products in France last week. GAIN stressed that Zilpaterol has never formed part of any formulation in any GAIN animal nutrition ranges. They supply a large amount of trainers in Britain and Ireland.

GAIN said in a statement, “We have made significant progress in our investigation and are working closely with the Department of Agriculture, Food and the Marine (DAFM), who are the regulatory body responsible for the feed sector in Ireland. Following consultation with DAFM, we have re-commenced equine feed production and will be in contact with our customers regarding resumption of feed supply.

“We continue to ask our equine customers to refrain from feeding their current stock of GAIN Equine products to their animals. We again apologise sincerely to our valued customers for the inconvenience caused by this incident and we are committed to promptly keeping you fully informed.”

France Galop tested all of the O'Brien Arc weekend runners on Friday, as they had also utilised GAIN products, with Aidan, Joseph and Donnach O'Brien eventually withdrawing all of their horses entered on Arc Sunday when those tests came back positive. Down Under, Racing Victoria has also conducted tests for Zilpaterol on Aidan and Joseph O'Brien's horses. The results are pending.

The British Horseracing Authority issued advice to trainers who have used GAIN's equine feed ranges on Tuesday. An elective testing system-carried out by the BHA's analytical laboratory, LGC– has been set up by the BHA.

“We anticipate that the sample analysis may take up to three working days to complete, though every effort will be made, within reason and depending on the volume of tests, to return results in time for any races in which horses are entered,” a spokesperson for the BHA told the Irish Field.