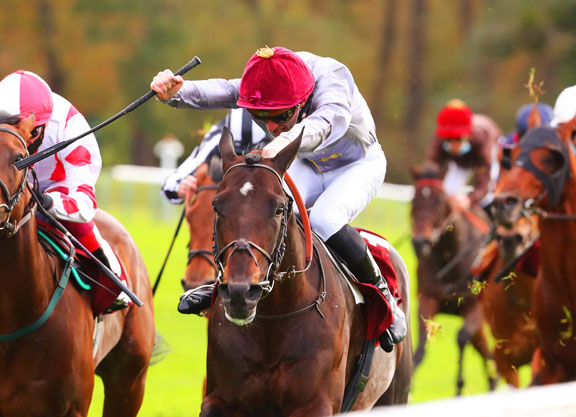 Group 1 winner Wooded (Ire) (Wootton Bassett {GB}-Frida La Blonde {Fr}, by Elusive City) has been retired and will stand at Haras de Bouquetot in France next year. A fee for the winner of the 2020 G1 Prix de l'Abbaye will be announced later.

“Wooded stood out from the day he arrived for his good looks and ability and he was very sound, never missing a day's work,” said trainer Francis-Henri Graffard. “In the G3 Prix Texanita he announced himself as a potential superstar and we were confident he would go close in the Commonwealth Cup. The difficulties of travelling this year made it impossible for him to run. As a racehorse he had so many qualities, class, courage and speed and he fully deserved his Group 1 win this year.”

A winner and placed in both the G3 Prix la Rochette and G3 Prix Thomas Bryon as a juvenile in the Al Shaqab colours, the bay did his best running at three. Successful in the G3 Prix Texanita, he was second in the G3 Prix du Petit Couvert three starts later in September prior to his Group 1 win facing elders on Arc Day. The Gestut Zur Kuste-bred €90,000 Arqana October yearling retires with a mark of 9-3-3-1 and $250,081 in earnings.

“Wooded has been a very special racehorse to us at Al Shaqab, winning such a prestigious sprint race as the Prix de l'Abbaye on Arc day, at 3-years-old and against much more experienced horses,” said Al Shaqab General Manager Khalifa Al Attiya. “He will now be starting a new exciting career at Haras de Bouquetot, and we feel confident that such a standout sprinter who performed at the highest level with such consistency at 2- and 3-years'-old will be very well received by the breeders.”

Out of a full-sister to SW & MGSP Fred Lalloupet (GB) (Elusive City) and a half-sister to SW & GSP Mon Pote Le Gitan (Thunder Gulch), Wooded is a full-brother to G3 Sovereign S. bridesmaid Beat Le Bon (Fr). His second dam, Firm Friend (Ire) (Affirmed), won at the listed level in France, and was also second in the G2 Italian 1000 Guineas and third in a further two French Group 3s.

Added Haras de Bouquetot Stud Manager Benoit Jeffroy, “We're delighted to welcome a Group 1-winning son of Wootton Bassett to join the roster at Haras de Bouquetot for 2021. An athletic mover of 1m67 (16.2 hh), Wooded has outstanding looks, is a very balanced and correct horse with great depth. He's always shown plenty of speed and we are confident he'll be an attractive sort to the European market.”