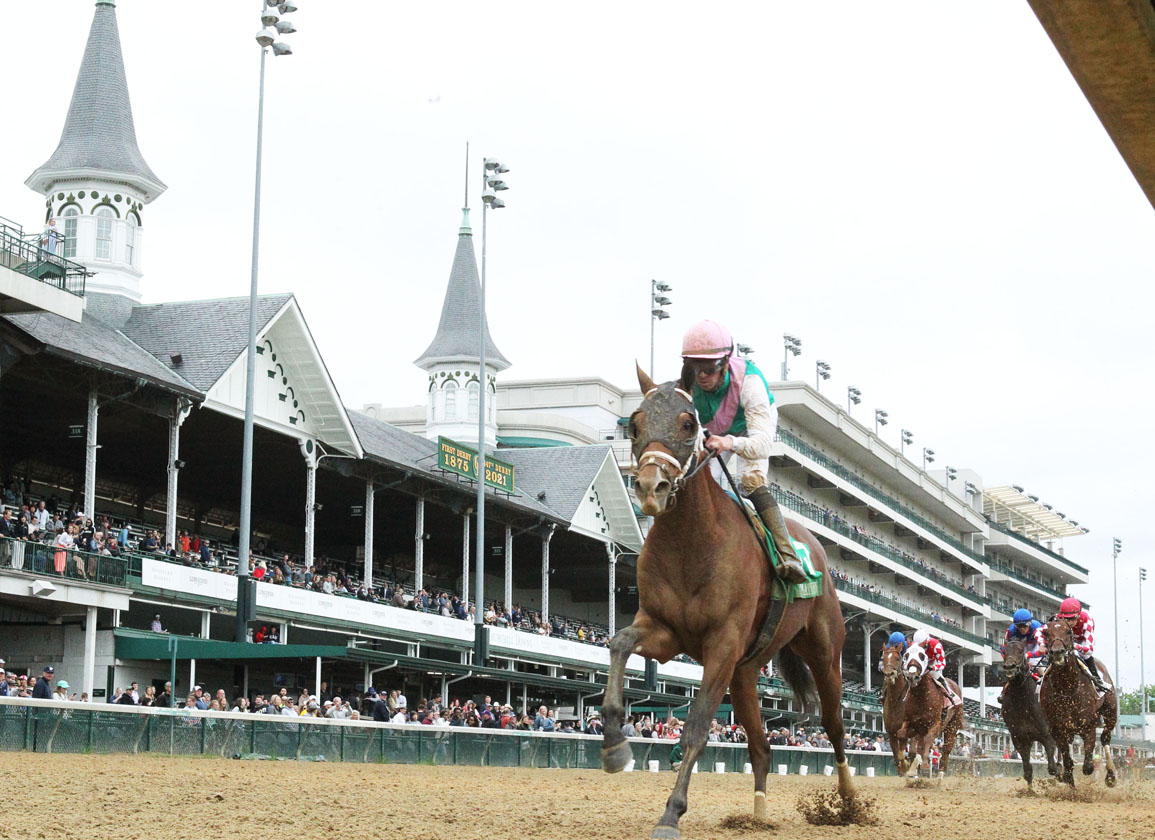 Four weeks after the commonly owned 'TDN Rising Star' and stablemate Mandaloun (Into Mischief) crossed the line second in the GI Kentucky Derby, Juddmonte's Fulsome (Into Mischief) was afforded his own chance to shine and made the most of the opportunity in Saturday's GIII Matt Winn S., overcoming a sluggish break to defeat Derby fifth O Besos (Orb) and that race's eighth-place finisher Helium (Ironicus) in convincing fashion.

Sent off the 17-10 chalk to remain perfect in three tries on the main track, the impeccably bred bay walked out of barrier five, but that caused jockey Florent Geroux little concern, as he settled Fulsome last of the septet as Helium poked through from between rivals to take up the running. Allowed to dictate reasonably soft fractions of :23.75 and :48.69, Helium galloped along comfortably enough as Fulsome continued to trail from within striking distance. O Besos was the first to come after the front-runner as the field neared the stretch, rolling up boldly three wide, but Fulsome had that move covered and was just finding his best stride four deep off the final corner. Fulsome claimed his two chief market rivals with relative ease outside of the eighth pole and strode home a good-looking winner.

“I was pretty confident he could take some dirt in his face and got him to relax early,” Geroux explained. “I was just hoping they were going fast up front after the slow break. He was able to go past those horses easily to win.”

Hailing from an extremely versatile female family, Fulsome began his career on the grass, besting three next-out winners when graduating by a neck at third asking at the Fair Grounds. Fourth in the Feb. 27 Black Gold S. in New Orleans, the bay romped in a rained-off Keeneland allowance in the slop Apr. 10 and was exiting a hard-fought, 1 1/4-length success in the May 1 Oaklawn S., getting the better of fellow Brad Cox trainee Warrant (Constitution).

Fulsome, the 43rd graded winner for his all-conquering sire, was produced by a winning daughter of French MSW & GSP Viviana, whose distinguished produce include Juddmonte's Sightseek (Distant View), a seven-time Grade I winner at distances from seven to nine furlongs on the dirt and dam of GSP Raison d'Etat (A.P. Indy); and Tates Creek (Rahy), a dual Grade I winner on the turf whose son Spirit Ridge (GB) (Nathaniel {Ire}) won his second race at group level in the G3 Premier's Cup Saturday at Eagle Farm in Brisbane, Australia.

Fulsome, who is bred on the exact same cross as 'TDN Rising Star' Life Is Good and fellow GSW Naughty Joker, has a 2-year-old half-brother named Rimprotector (Point of Entry), a yearling half-sister by Frosted and a foal half-sister by Twirling Candy.