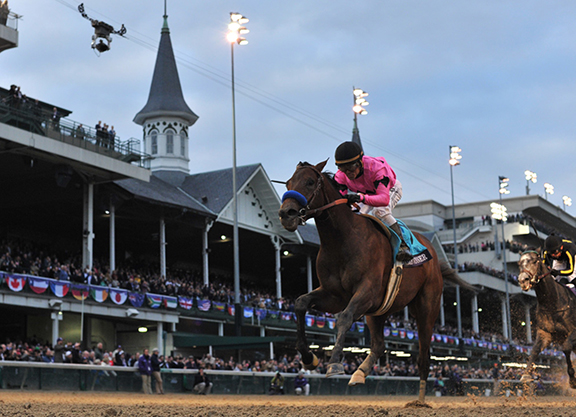 We sat down with Bill Farish and spoke with him on Game Winner and Gift Box, both Grade I-winning millionaires who will join Twirling Candy and Unified in carrying on the Candy Ride (Arg) legacy at Lane's End.

Six stallions by Candy Ride reside in Kentucky this year. Of those two are new for 2021, Game Winner and Vekoma, and only one has seen runners- four-time Grade I producer Twirling Candy. The remaining three, Gun Runner, Mastery and Unified, will all be represented by their first 2-year-olds this year.

“Candy Ride is really making a phenomenal sire of sires,” Farish said. “It's always neat to see a stallion take it to that level and become a sire of sires like we were able to see with A. P. Indy and others. It stamps their mark on the breed in a very significant way.”

Game Winner begins his career at stud as a $2 million earner, a Breeders' Cup and Eclipse champion, and a graded stakes winner at two and three.

Bred by Summer Wind Farm, the colt was the third and final foal out of Indyan Giving (A. P. Indy), who died shortly after his foaling. Game Winner's 7-year-old half-brother Flagstaff (Speightstown) is a Grade II winner still in training with John Sadler and their late granddam Fleet Indian (Indian Charlie) was a champion older mare and dual Grade I winner.

A $110,000 Keeneland September buy for Ben Glass, agent for Gary and Mary West, Game Winner was sent to Bob Baffert and soon made a 'TDN Rising Star'-worthy debut with a 5 3/4-length victory at Del Mar.

“I think he surprised Bob a little bit in his maiden win,” Farish said. “If I remember right, I don't think Bob thought he was that precocious for him to run as well as he did first time out.”

That precocity never wavered for the remainder of his undefeated juvenile season as the colt reeled off victories in the GI Del Mar Futurity, GI American Pharoah S. and GI Breeders' Cup Juvenile.

“At that point when he ran in the Breeders' Cup Juvenile, he was not necessarily coming to Lane's End,” Farish noted. “But we were very excited to see him run and hoping obviously for Candy Ride that he would run well. It was great to see him really follow through. It's a tough race usually for favorites and he really came in and put on a great performance.”

“I think any horse that comes out as a 2-year-old and wins three straight Grade I races, you just don't see it very often,” Farish said. “Bob said in an interview that to bring it to that championship level is really special and in the Breeders' Cup Juvenile, he showed just how good he was.”

After a four-month layoff, the bay continued on his journey towards the Kentucky Derby  in the GII Rebel S., finishing second by a nose to Omaha Beach (War Front), who would later claim three more Grade I wins that year. He again ran second in his next start in the GI Santa Anita Derby.

In the GI Kentucky Derby, Game Winner was forced to take a wide trip, but gained ground late to finish sixth, elevated later to fifth after the disqualification of Maximum Security (New Year's Day). His effort earned the best Thorograph figure of the field.

“In the Derby, he was always up against it,” Farish said. “He had a tough post and then his running style in a 19-horse field really made it difficult for him. If you go back and watch the race, it's a phenomenal move that he makes.”

The sophomore returned to California to win the GIII Los Alamitos Derby by five lengths that summer, but incurred a high suspensory injury soon after that prevented him from returning to the starting gate and he was subsequently retired.

Farish spoke on the new addition's reception in his first year at stud.

“His first book is shaping up to be really phenomenal for us,” he said. “A 150-mare book is a big book and he's going to be a little north of that in his first year. The West's are very supportive of all their sire prospects and they're breeding some very nice mares to him.”

Farish said that Game Winner's status as a juvenile champion has been one of the biggest attractions for breeders.

“In recent years, 2-year-old champions have had great success at stud with Nyquist, Uncle Mo, Street Sense and others. It's traditionally something farms look for, that 2-year-old precocity. It's not the only criteria, but it's certainly been very successful in recent years and there's no reason why it shouldn't help Game Winner in a big way.”

Additionally, Farish noted that the new addition's physical reflects the best of his sire.

“Game Winner is a little bit bigger version of Candy Ride,” he said. “He's a good, medium-sized horse, is really well conformed and physically, is everything you'd want in a sire prospect. So we can't wait to see his offspring running pretty soon.”

Gift Box, the first grandson of Candy Ride to join the Lane's End roster, begins his stud career as a Grade I-winning millionaire.

“Gift Box is an exciting horse for us as well,” Farish said. “Being a son of Twirling Candy, it's really fun for us to have that three-generation history with the horse. He showed, from two and three and on, just how good he was.”

A $135,000 weanling purchase for the Farish family, the Machmer Hall-bred colt was sent to Chad Brown as a juvenile and won in his second start at two before placing in the GII Remsen S.

At three, Gift Box ran second in the Curlin S. behind stablemate and eventual studmate Connect (Curlin), and later ran fourth in the GI Travers S.

Transferred to the John Sadler barn towards the tail end of his 5-year-old season to be campaigned by Hronis Racing, the speedy gray defeated champion Battle of Midway (Smart Strike) in the GII San Antonio S. before getting his Grade I win in the Santa Anita H., besting Grade I winners McKinzie (Street Sense) and Mongolian Groom (Hightail).

“He certainly had some big races all in a row in California,” Farish recalled. “We knew he had the ability, but to see it happen on that day was so important. It was amazing how high John Sadler was on him really from the time he got him and he lived up to that billing.”

Gift Box wrapped up his 6-year-old campaign with a second-place finish behind champion Vino Rosso (Curlin) in the GI Gold Cup at Santa Anita S. and a 3 3/4-length win in the GII San Antonio S.

In his five-year career, the son of Twirling Candy ran in the money in all but four of his 18 starts.

“Gift Box is interesting because we usually don't retire horses at that age,” Farish noted. “So I was kind of curious as to if anyone else had been that successful at that age and of course, Speightstown jumps right at you. To see the length of Speightstown's stud career and the impact he's had solved any trepidation I had with Gift Box.”

The new stallion is out of the Unbridled's Song mare Special Me who also produced dual Grade II winner and Grade I placed Stonetastic (Mizzen Mast) as well as Grade II winner Special Forces (Candy Ride {Arg}). The mare's most recent foal, a filly by Into Mischief named Gina Romantica, sold for $1.025 million to Liz Crow at the 2020 Keeneland September Sale.

“His pedigree is really exciting to me with Unbridled's Song on the bottom side,” Farish said. “With that comes speed and precocity, and I think that crossed with Candy Ride and Twirling Candy is pretty exciting to see how it plays out. He's a gorgeous physical with a lot of Unbridled's Song in him in the best sort of way. He's really beautifully conformed and we can't wait to see what his babies look like.”