From the TDN Look: Keeping the Faith, Victor Martinez Believes in King Guillermo 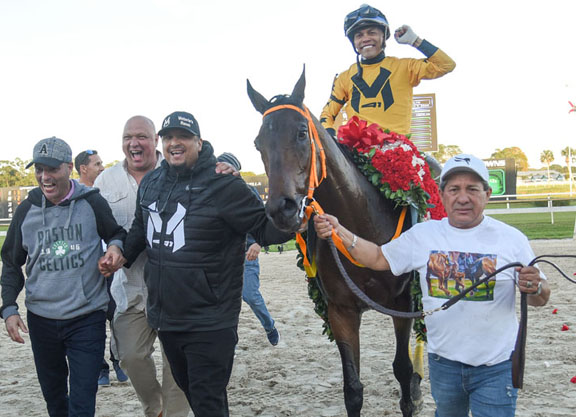 Five-time MLB All-Star Victor Martinez is following a dream with King Guillermo– already a graded stakes winner who, after a seven-month layoff, is set to return to Grade I company.

King Guillermo (Uncle Mo) will be in a tough spot when he starts in the GI Cigar Mile H.at Aqueduct. The 3-year-old colt hasn't raced since May 2 and has never faced older horses. That's fine by his owner, retired MLB All-Star Victor Martinez.

“I'm not a big believer in favorites,” he said.

That was the theme throughout his baseball career and helped him surpass the modest expectations when he was a skinny kid out of Venezuela who got a mere $8,000 signing bonus from the Cleveland Indians as a 17-year-old prospect. He still feels that way, his beliefs strengthened by the emergence of the horse who seems to do his best when it is least expected.

During his playing days, Martinez was a casual racing fan who was first introduced to the sport as a boy in his hometown of Ciudad Bolívar, Venezuela. He retired in 2018 and just a few months later decided it might be fun for his family if he were to own a few racehorses. His agent from his playing days put him in touch with trainer Juan Carlos Avila, who had recently arrived in the U.S. after a distinguished career in Venezuela. Martinez didn't want to just own horses. He wanted to own special horses.

“I sat down with Juan Carlos and I told him, 'Listen you're not going to get a horse just to go to the Kentucky Derby, you're going to pick the horse that will win the Kentucky Derby,'” Martinez said. “He looked at me, like this guy is crazy. I've been dreaming my whole life, my whole career. I came to the United States with zero dollars in my pocket. Why not keep dreaming?”

Avila didn't have the heart to tell Martinez that was being unrealistic. The two were soon headed to the 2019 OBS April 2-Year-Old sale in search of that special horse Martinez seemed to think was easy to come by. Martinez knew little about racing, breeding and the sales, but understood that Uncle Mo was one of the sport's best sires. He wanted one.

The one he picked out was out of the Dixieland Band mare, Slow Sand. From six foals of racing age, she had produced five winners but no stars. Then there was the colt's size. He was on the small side, something that would turn off a lot of buyers but not Martinez. He felt a connection with the horse.

“The way we got him, it made me reflect on my career,” he said. “He was a little guy and if he had weighed 100 more pounds we wouldn't have been able to buy him. He would have cost way more. I was the same way. When I first signed in professional baseball I was 120, maybe 130, pounds. At the time, I was a shortstop and I only got an $8,000 signing bonus. I put a lot of work in to get where I did. He was a little guy that a lot of people didn't pay any attention to.”

He broke in with the Cleveland Indians as a shortstop, but was told by that organization that the only way he could make it was if he switched positions and became a catcher. He was so discouraged by that decision that he called his mother and told her he was quitting. She refused to let him give up, maybe the best advice he ever received.

That scrawny kid from Venezuela bulked up to 235 pounds and became a five-time All Star. Martinez had 246 home runs and 1,178 RBI in his career, hitting .295. In 2015, he signed a four-year $68 million contract with the Detroit Tigers.

So there was something about this horse that reminded him of himself. For $150,000, a reasonable sum for an Uncle Mo, Martinez purchased the horse.

Click here to continue reading on the TDN Look.