Home » Archive » Shared News » From TDN Look: A Changing of the Guard at Denali

From TDN Look: A Changing of the Guard at Denali 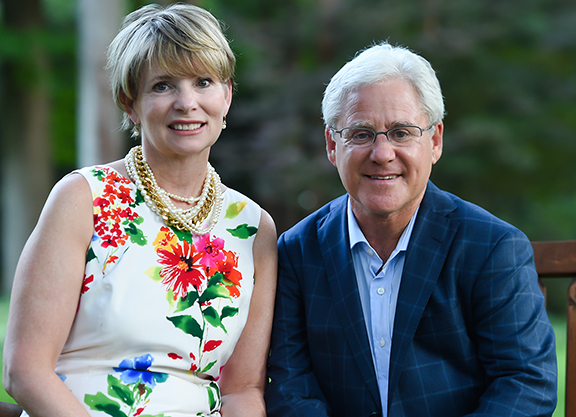 There really is something about horses; it seems to be simply impossible to fall out of love with them.

Craig Bandoroff tried once. Devastated after losing the use of his right arm in a horrific fall at Garden State Park in New Jersey in 1974 less than a year into a promising career as a jockey, Bandoroff decided he was done with the animals. He refocused his attention and enrolled at the University of Virginia-where he met, naturally, a professor that had horses.

“I think, initially, I had the mindset that I didn't want anything to do with horses and it was probably still a pretty bitter pill to swallow,” Bandoroff recalled. “But by serendipity I met a professor who had a farm and had horses and lo and behold, I started to ride again. I met somebody who helped design a bridle so that I could ride with one hand and I got back into riding pretty seriously.”

The story goes that Bandoroff was bitten by the 'horse bug' after making friends as a kid whose father was a jockey, but he insists he was “born with a gene that I love horses.” It is apparent Bandoroff has passed that gene to his 28-year-old son and middle child Conrad who–in the 30th anniversary year of the family's Denali Stud–is well on his way to taking over management and leading the business into its next phases.

Craig Bandoroff and his wife Holly have certainly set a lofty standard. The farm sold its first million-dollar mare in 1998 at Keeneland November and the results have continued apace. Today, Denali Stud has raised or sold 35 Grade I winners and its consignment has brought in over $650-million, including 55 seven-figure horses. The Bandoroffs managed the broodmare career of Hall of Famer Serena's Song (Rahy), and the 28-year-olds resides to this day at Denali alongside three daughters and one granddaughter. They raised and co-owned 2011 GI Kentucky Derby winner Animal Kingdom (Leroidesanimaux {Brz}), and celebrated two winners of the GI Belmont S. within three years in 2017 and 2019 in Tapwrit (Tapit) and Sir Winston (Awesome Again).

Craig and Holly Bandoroff have summitted the highest peaks of the sport. But as such things go, the path wasn't always straightforward, and it certainly wasn't easy. It took heavy doses of hard work, dedication and determination to get to-and stay at– the top.

Accepting the fact that horses were in his life to stay after his fateful meeting at the University of Virigina, Bandoroff transferred to the University of Kentucky's College of Agriculture. It was there that he met Holly, and it was at that time that he called in favours from some of his racetrack contacts and wound up shadowing some of the top horsemen in the business, like Lee Eaton and Fred Seitz. A stint in New York working for Fasig-Tipton and Matchmaker followed, but in 1986 the Bandoroffs were called back to the Bluegrass when Craig received an offer to manage the sales operations of R.D. Hubbard's Crystal Springs Farm.

“I set up camp there and was involved in the farm end of things and the consigning end of things for Crystal Springs Farm,” Bandoroff said. “One thing led to another and Mr. Hubbard decided he wanted to scale back and have his own horses, and we were at the stage where we wanted to scale up, not back. And so we were fortunate that he let us continue to stay there and lease [the facility] and gave us some of his horses, a base to work from.”

Crystal Springs served as an able base on which the Bandoroffs built the foundation of their business acumen and clientele. In 1990, Denali Stud was born with the purchase of an initial 300-acre plot, which over the ensuing years has grown to almost 800 acres comprising broodmare and yearling divisions in Paris, Kentucky. Looking back, Bandoroff reflects on the leaps of faith required to grow such a business.

“When I talk to young people, like when I give a lecture for the [Godolphin] Flying Start kids or when I used to teach a couple of classes at the University of Louisville, I'd always ask the question to them: 'what do you think is tougher, starting [a business] or keeping it going? And it's like the $64,000 question. And we go around the room and inevitably, half of them say starting, half of them say keeping it going. And I'd say, 'there's no question. Keeping it going is tougher.' Now, maybe that's because that's the moment that you're living in. But in the business we're in or the world we live in, nobody cares what you did yesterday; it's what are you going to do for me tomorrow?

To read the rest of this story, or to watch the video or hear it as a podcast, click here.