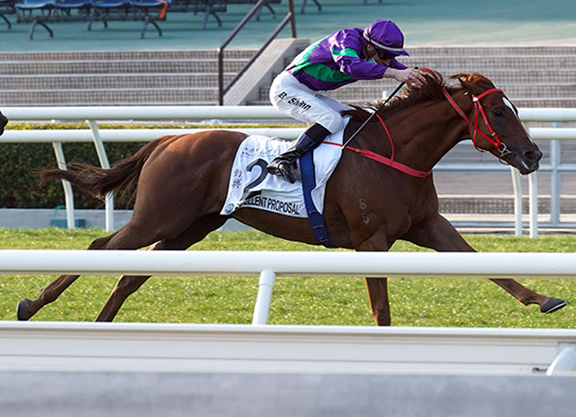 Those who got stuck into Sunday's Hong Kong Classic Mile from a pari-mutuel standpoint very much adopted a 'what-have-you-done-for-me-lately' approach, failing to give the talented Excellent Proposal (Aus) (Exceed and Excel {Aus}) the benefit of the doubt for a dismal last-out performance in Class 2 company Jan. 10. Dismissed at 22-1, a massive overlay given the promise he'd shown previously, the chestnut rallied wide beneath Blake Shinn and charged home to cause the boilover. Lucky Express (Aus) (Toronado {Ire}) lasted for second from a desperately unlucky Tourbillon Diamond (Aus) (Olympic Glory {Ire}). The race was marred by an injury to the well-backed Enrich Delight (Aus) (Medaglia d'Oro), who took a bad step at the 1100-meter mark and was later euthanised, with multiple fractures in a fetlock, South China Morning Post reported.

Void of early speed from his high draw, Excellent Proposal raced with one or two behind through the opening stages and was forced to take some evasive action around the stricken Enrich Delight prior to the turn. Traveling deep, but with cover on the circle, he shifted out into the clear leaving the 600-metre mark and enjoyed a clean run through the lane en route to the victory. Lucky Express sat a good inside trip and weaved his way through to grab second, while Tourbillon Diamond was strung up in traffic from the 400m to the furlong grounds and flew home once clear for a luckless third.

“He has a very good temperament, he is a very quiet horse and he probably just missed the competition–he hadn't raced for three months and it looks like that is correct, because today he savaged the line, he knew what he was doing and he was there to win the race,” said trainer John Size, winning the Classic Mile for the third time in the last six years.

A winner of three of his four Australian starts for Richard and Michael Freedman, Excellent Proposal was second off a rating of 75 on local debut last season and won his first three this term before his headscratching 11th last time. That result helped push Joao Moreira onto Sky Darci (NZ) (Darci Brahma {NZ}), the 23-10 favourite in the Classic Mile, but who could do no better than sixth.

Excellent Proposal is the 180th worldwide stakes winner for Exceed and Excel, whose five other Hong Kong stakes winners include the now-retired dual G1 Longines Hong Kong Sprint hero Mr Stunning (Aus). The winner's dam was a daughter of the Leon MacDonald-trained Group 2 winner Dilly Dally and was raced as a homebred by Godolphin to victories at Deauville and Longchamp in 2011 ahead of a listed-stakes placing at Maisons-Laffitte. Exported to Australia in 2012, she produced foals by Invincible Spirit (Ire) and Medaglia d'Oro in 2013 and 2014, respectively, was barren for 2015 and was purchased by the Victoria-based Holloway Equine for A$180,000 carrying the colt that would become Excellent Proposal at the 2016 Magic Millions National Broodmare Sale. Procrastination produced the Vancouver (Aus) colt Potato Pete for Fernrigg Farm in November 2017, but passed away the following month, days shy of her 10th birthday.