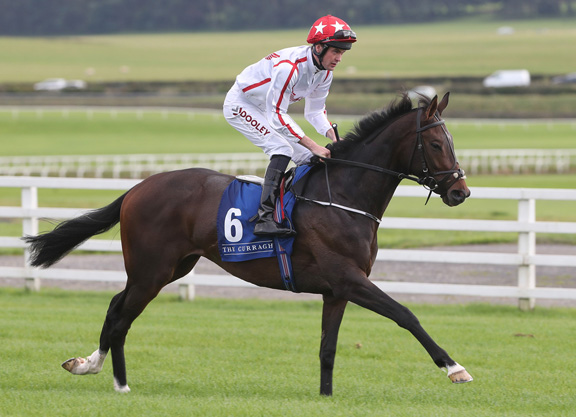 8th-GP, $46k, AOC, 3yo, f, 1 1/8mT, post time: 4:46 p.m. ET
NOPE (IRE) (No Nay Never) made five European starts for Alpha Racing and trainer Jessie Harrington, defeating the boys in a Fairyhouse maiden at second asking before concluding that portion of her career with a close fourth in the G3 Oh So Sharp S. at Newmarket in October. A half-sister to European MGSP Wall of Fire (Ire) (Canford Cliffs {Ire}), the 135,000gns Tattersalls October yearling is out of a daughter of Jewel In the Sand (Ire) (Bluebird), winner of the 2004 G2 Cherry Hinton S. Eve of War (Declaration of War) and Apogee (Malibu Moon) loom the chief protagonists. TJCIS PPs

9th-GP, $46k, AOC, 3/up, f/m, 1 1/16m, post time: 5:17 p.m. ET
SLAM DUNK (Into Mischief) missed narrowly in a seven-furlong Saratoga maiden Sept. 1, but connections pressed on nonetheless to the GI Frizette S. and the $450K Fasig-Tipton Saratoga graduate validated that trust with a third-place effort behind 'TDN Rising Star' Wicked Whisper (Liam's Map). The bay, who was bought back on a bid of $40K when offered in utero at KEENOV in 2016, is a half-sister to Grade III-winning turfer Kitten Kaboodle (Kitten's Joy) and was last seen romping by 5 1/2 lengths in a one-mile Churchill maiden in the slop Nov. 7. TJCIS PPs

10th-OP, AOC, 3yo, 6f, post time: 6:38 p.m. ET
NO PAROLE (Violence) bossed his fellow Louisiana-breds by a combined 27 1/2 lengths in his first two starts at the Fair Grounds, earning 'Rising Star' status Jan. 11, before rolling home a 6 1/2-length winner of the state-bred restricted Premier Night Prince S. at Delta Feb. 8. He cuts back to one turn after finishing a distant last of eight in the GII Rebel S. over this strip Mar. 14. TJCIS PPs