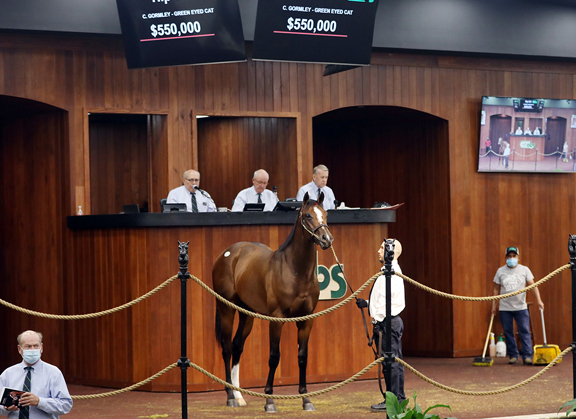 HEADLINE REPORT (Gormley), a $550,000 OBS March bullet breezer (:9 4/5), debuts for Breeze Easy LLC and Wesley Ward. The $160,000 Fasig-Tipton Select yearling pinhook by Eddie Woods's Quarter Pole Enterprises is out of the Tale of the Cat mare Green Eyed Cat and is a grandson of two-time Grade I winner Critical Eye (Dynaformer). Freshman sire Gormley's first yearlings in 2020, led by a $270,000 colt, averaged $37,544 (59 sold), according to TDN Sales Results by Stallion. “He had a fabulous breeze,” Woods said of the half-brother to SW Little Kansas (El Kingdom). “He's a magnificent-looking horse. It's good money for a first-season stallion. He did everything right and was real easy on the eyes, hence everyone liked him.” TJCIS PPs

A deep-looking group of 3-year-olds line up here, including SUPPRESSOR (Munnings), a full-brother to MGISW I'm a Chatterbox. The chestnut is owned by Fletcher and Carolyn Gray and William Harrigan and trained by Hall of Famer Steve Asmussen. He RNA'd for $125,000 as KEESEP yearling.