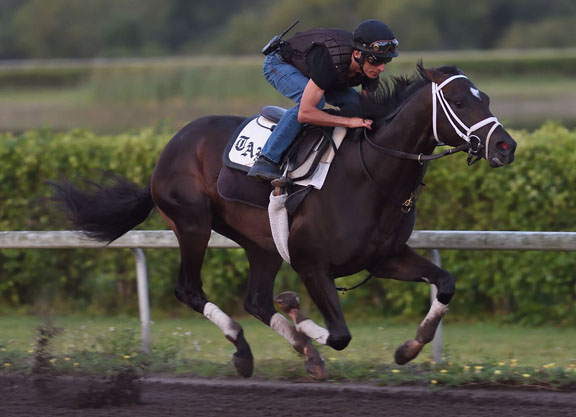 • Potential GI Kentucky Derby favorite Always Dreaming (Bodemeister), a dazzling five-length winner of the GI Xpressbet Florida Derby Apr. 1, worked a bullet five furlongs with regular rider John Velazquez aboard in 1:01.40 (1/7) at trainer Todd Pletcher's Palm Beach Downs base Friday. “I thought it was excellent,” Pletcher said. “We were looking for a nice, steady, solid stamina-building breeze. He was very relaxed, very happy, moving well, and galloped out great. I was very happy. He's been training great, eating well, energy level has been good. We're really excited about how he's doing.” Pletcher added, “We have a flight to Churchill Tuesday and an important work over the track there. Hopefully, he takes to that surface the way he has to every other surface he's been on and he stays healthy.”

• 'TDN Rising Star' Patch (Union Rags), a good second in the GII Twinspires.com Louisiana Derby at third asking Apr. 1, also covered five furlongs in 1:01.45 (2/7) for Pletcher at Palm Beach Downs Friday. “He's not as impressive a work horse as Always Dreaming,” Pletcher said. “He's more of a workmanlike breeze horse. I thought it was a good, steady five-eighths, typical of what we saw from him all winter and spring.” Pletcher added, “I was very pleased for him to go to Fair Grounds and finish a good quality second, closing ground at the end and galloping out in front. I don't think with his pedigree that distance should be an issue. I'm a little concerned about his lack of experience, lack of seasoning, but so far he's handled everything really, really well.”

• Pletcher added that GII Wood Memorial S. runner-up and 'TDN Rising Star' Battalion Runner (Unbridled's Song) is expected to ship to Churchill Downs Sunday. “[The Wood] was his first race in 64 days and first at 1 1/8 miles, and I hope that brings him forward a bit,” he said.

Pletcher commented that he's “drawing a line” through GII Lambholm South Tampa Bay Derby winner Tapwrit (Tapit)'s fifth-place finish in the GII Blue Grass S. last time Apr. 8. “He got hung out pretty wide on the turn and ran kind of a flat race, but he seemed to come out well,” Pletcher said. “Hopefully, he trains accordingly and comes back to his Tampa form.” Tapwrit worked five furlongs in 1:01.40 (8/17) at Keeneland Friday.

Pletcher added that he's “on the fence” on what direction he will take with GII Rebel S. winner and 'TDN Rising Star' Malagacy (Shackleford), who finished fifth in the Apr. 15 GI Arkansas Derby.

• Gunnevera (Dialed In), winner of the GII Xpressbet.com Fountain of Youth S. and last out third in the GI Xpressbet.com Florida Derby Apr. 1, breezed five furlongs in 1:01 (3/15) at Gulfstream West Friday. “Never in my life have I had a horse that is like this after a race [or a workout],” trainer Antonio Sano said. “He never breathes hard; [needs] no water.” Sano added, “The horse did it very easy. I'm very happy. He galloped out good.” Javier Castellano will ride in the Kentucky Derby.

• Blue Grass runner-up and GI Champagne S. winner Practical Joke (Into Mischief) worked a half-mile in :49.80 (43/71) in company with grassy Grade III winner Ticonderoga (Tapit). “He worked fine,” trainer Chad Brown said. “He worked an easy half, and I was happy with what I saw. He's moving sound and happy. He'll have a serious work next Friday at Churchill, weather permitting.”

• Trainer Mark Casse's barn breezed 16 horses Friday morning at Churchill Downs, including GI Xpressbet.com Florida Derby runner-up State of Honor (To Honor and Serve), who worked five furlongs with Julien Leparoux aboard in 1:01.60 (21/40) for the Derby. Jose Lezcano has the mount on the First Saturday in May. “State of Honor breezed very well,” assistant trainer Norm Casse said. “I'm very happy with how he looked on the track and he's developing well for the Derby.”

1:00.40 (12/40) in preparation for the GI Longines Kentucky Oaks. “Salty is one of those horses that gets me excited,” Casse said. “She did everything well within herself and looked great cooling out at the barn.” Joel Rosario is slated to pilot Salty in the Oaks.

• 'TDN Rising Star' Paradise Woods (Union Rags), a jaw-dropping winner of the GI Santa Anita Oaks by a race record margin of 11 lengths Apr. 8, worked four furlongs at Santa Anita Friday in :47.60 for the Kentucky Oaks. “Beautiful,” is how Hall of Fame trainer Richard Mandella termed the move under Flavien Prat. “She'll have a more serious work next Thursday or Friday and ship to Kentucky May 1.”

• Kentucky Oaks candidate Daddys Lil Darling (Scat Daddy), heroine of last year's GII Pocahontas S. and runner-up in Keeneland's GI Central Bank Ashland S. last out Apr. 8, worked four furlongs in :47.40 (1/71) at Keeneland Friday. “She went really good; a nice maintenance move,” rider Robby Albarado said. “I hope she gets some pace to run at in the Oaks. If so, she will be fine. I am positive she will be staying on at the end.”