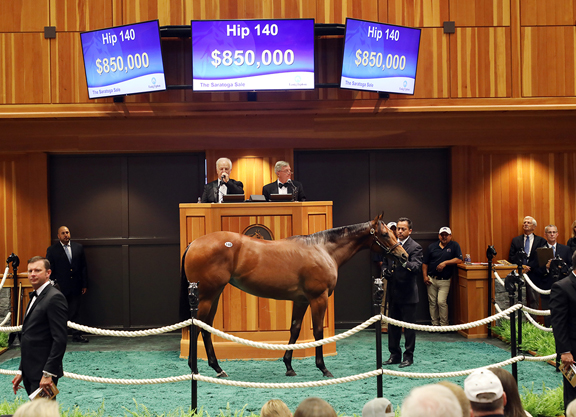 Gary Barber and Baccari Racing Stable’s SALTY AS CAN BE (Into Mischief) opens her account in this sprint, the second event on a star-studded GI Longines Kentucky Oaks day card at Churchill. Bought for $850,000 at Fasig-Tipton Saratoga, the bay is a half-sister to Salty (Quality Road), who won the GI La Troienne S. over this track for these connections in 2018 before selling for $3 million to Don Alberto at Fasig-Tipton November. Other interesting firsters in the field include Stoneway Farm’s Amusing Antics (Super Saver) and David McCarty’s Super Sport (Not This Time). The former, the first foal out of an unraced half-sister to last year’s dual champion Covfefe (Into Mischief) and MGSW/MG1SP Albiano (Harlan’s Holiday), shows a sharp local worktab for Bill Mott, including a half-mile gate breeze in :48 1/5 (2/58) Aug. 17. The latter, from the female family of multimillionaire Spain (Thunder Gulch), is by the hottest current freshman sire and drilled a bullet four furlongs in :46 3/5 (1/13) out of the blocks Aug. 25 at Keeneland for Ignacio Correas. Of the horses with experience, Franklin Ave Equine and Jon Green’s Quick Munny (Munnings) looks the one to beat after showingspeed and running second behind ‘TDN Rising Star’ Inject (Frosted) on debut Aug. 15 at Ellis. TJCIS PPs

In the second half of this six-furlong heat, another $850,000 Fasig-Tipton Saratoga purchase in OXO Equine’s Travel Column (Frosted) makes her debut. The Brad Cox-trained gray is a half-sister to MGISP Neolithic (Harlan’s Holiday) out of MSW Swingit (Victory Gallop). Peace Broker (War Front) also lifts the lid on her career from the outside post Bob Gorsky and CJ Thoroughbreds. The bay is a half-sister to GSW/MGISP ‘TDN Rising Star’ Donna Veloce (Uncle Mo), who is slated to run later in the card in the GI Longines Kentucky Oaks. TJCIS PPs