Freshman Sire Cannock Chase Off the Mark at Haydock 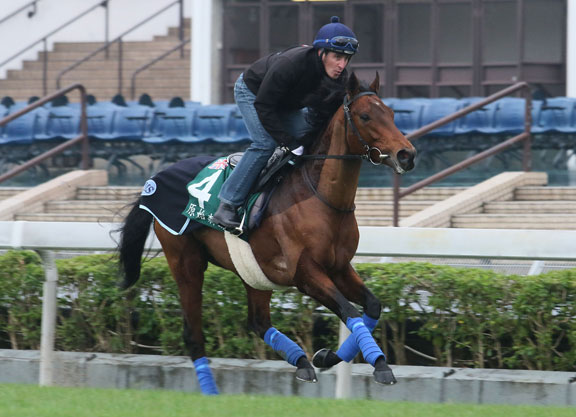 Cannock Chase, who registered a first winner with Run This Way | HKJC

5th-Haydock, £5,400, Nov, 8-11, 2yo, f, 6f 212yT, 1:30.65, sf.
RUN THIS WAY (GB) (f, 2, Cannock Chase–Prime Run {GB}, by Dansili {GB}), who finished off the radar when last of six in her July 30 unveiling over seven furlongs at Musselburgh, was swiftly into stride and led from the outset of this return. Untroubled on the lead until shaken up when threatened approaching the quarter-mile marker, the 22-1 outsider was safely clear entering the final furlong and kept on strongly under mild rousting in the closing stages to comfortably account for the well-related Verbena (GB) (Lethal Force {Ire}) by 2 1/2 lengths. “I didn't ride her, but she was green first time at Musselburgh and the soft ground out there probably helped her today,” said winning rider Joe Fanning of the upcoming Tattersalls August Horses-in-Training sale entry. “She pinged out of the gates, I was always comfortable on her and confident that she'd see out the trip well. There's some more improvement in her and, hopefully, she'll come on for that.” Run This Way is the latest of four foals and first winner produced by a half-sister to six black-type performers, headed by G1 Prix Morny heroine Silca's Sister (GB) (Inchinor {GB}), MGSW G1 Prix Morny, G1 Irish 1000 Guineas and G1 Coronation S. placegetter Golden Silca (GB) (Inchinor {GB}) and G1 Moyglare Stud S. and G1 Cheveley Park S. placegetter Silca Chiave (GB) (Pivotal {GB}). Lifetime Record: 2-1-0-0, $4,566.
O-Saeed Suhail; B-Rabbah Bloodstock Ltd (GB); T-Mark Johnston.