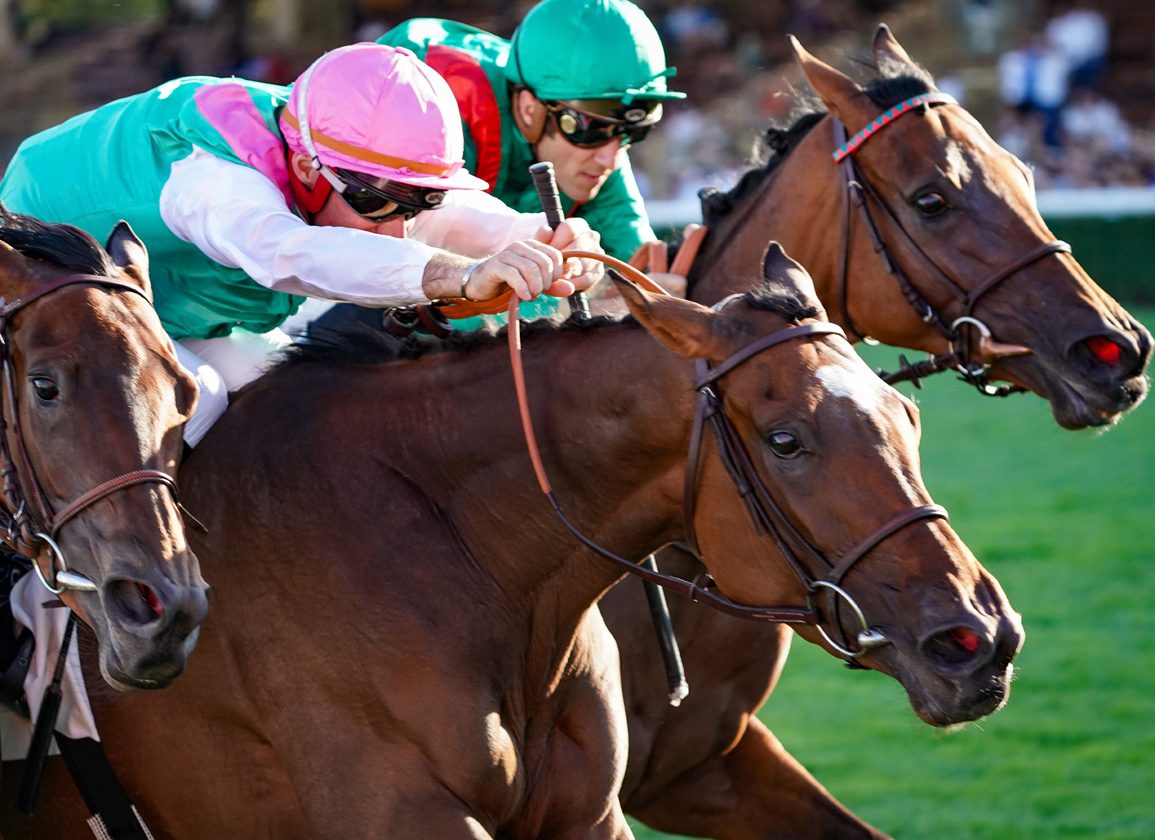 Fresh off a confidence-boosting triumph in last month's Listed Prix Melisande at ParisLongchamp, Juddmonte's homebred 3-year-old filly Raclette (GB) (Frankel {GB}–Emollient, by Empire Maker) continued her resurgence with a narrow victory, back at the Bois de Boulogne venue, in Thursday's G2 Prix de Malleret (Prix Le Bonbon) to set the stakes action rolling on Bastille Day. The April-foaled bay debuted with a 'TDN Rising Star' display at Deauville last August, closing her juvenile campaign with another win at Chantilly in September, but was off the board in her first two starts this term. She ran eighth in April's G3 Prix de la Grotte and fourth in May's Listed Prix Finlande, regaining her winning thread last time, and was usurped in the betting market as the holiday crowd marked G3 Prix de Royaumont victrix Baiykara (Fr) (Zarak {Fr}) as the 4-5 pick. The eventual winner found a smooth rhythm stalking the tempo in second after the initial exchanges of the 12-furlong contest. Nudged along to challenge passing the quarter-mile marker, Raclette gained a slender advantage entering the final furlong and was ridden out to bravely hold the challenges on both sides for a career high. At the line, she was a head too good for the fast-closing Listed Prix de Thiberville winner Lastotchka (Fr) (Myboycharlie {Ire}), with Baiykara contributing to a thriller and finishing a short neck adrift in third.

“The Family will be delighted with this result,” commented Juddmonte's on-course representative after the win elevated the old guard of Andre Fabre and Olivier Peslier to a combined tally of 16 in the contest, Fabre extending his record haul to a round 10 and Peslier collecting a sixth edition. “Raclette is a smart filly and we have to congratulate Andre Fabre for the fantastic job he has done with this filly. Ever since she ran that first day, he always said the further she went the better she would be and all has gone as he predicted. We will see how she comes out of the race and Mr Fabre will discuss the future with the Family and [racing manager] Barry Mahon. There are plenty of opportunities for her both in France and abroad.”

The best foal of her four-time Grade I-winning dam Emollient, Raclette is a full-sister to the stakes-placed Licence (GB) (Frankel {GB}) and a half-sister to War Front filly Peace Charter (GB), who was second in the G3 Juvenile Fillies Sprint S. at Naas and third in the G2 Balanchine S. The 'TDN Rising Star's juvenile full-sister has been named Ardent and has yet to race. Emollient was barren to Quality Road last year and her 2022 Into Mischief foal died. She returned to Claiborne sire War Front this spring.

The Classic-placed Hofburg (Tapit) is under the second dam, while the third dam, Glia (A.P. Indy), is a daughter of the outstanding blue hen Coup de Genie (Mr. Prospector). Her black-type descendants are legion, with Group 1 winners Denebola (Storm Cat), Bago (Fr) (Nashwan) and Maxios (GB) part of her brood. The last two both found places at stud and currently make their homes in Japan and Ireland, respectively.

Raclette is very tough! The @JuddmonteFarms Frankel filly holds on to take Group 2 honours for Peslier and Fabre at @paris_longchamp… pic.twitter.com/TNPDdrXwE6