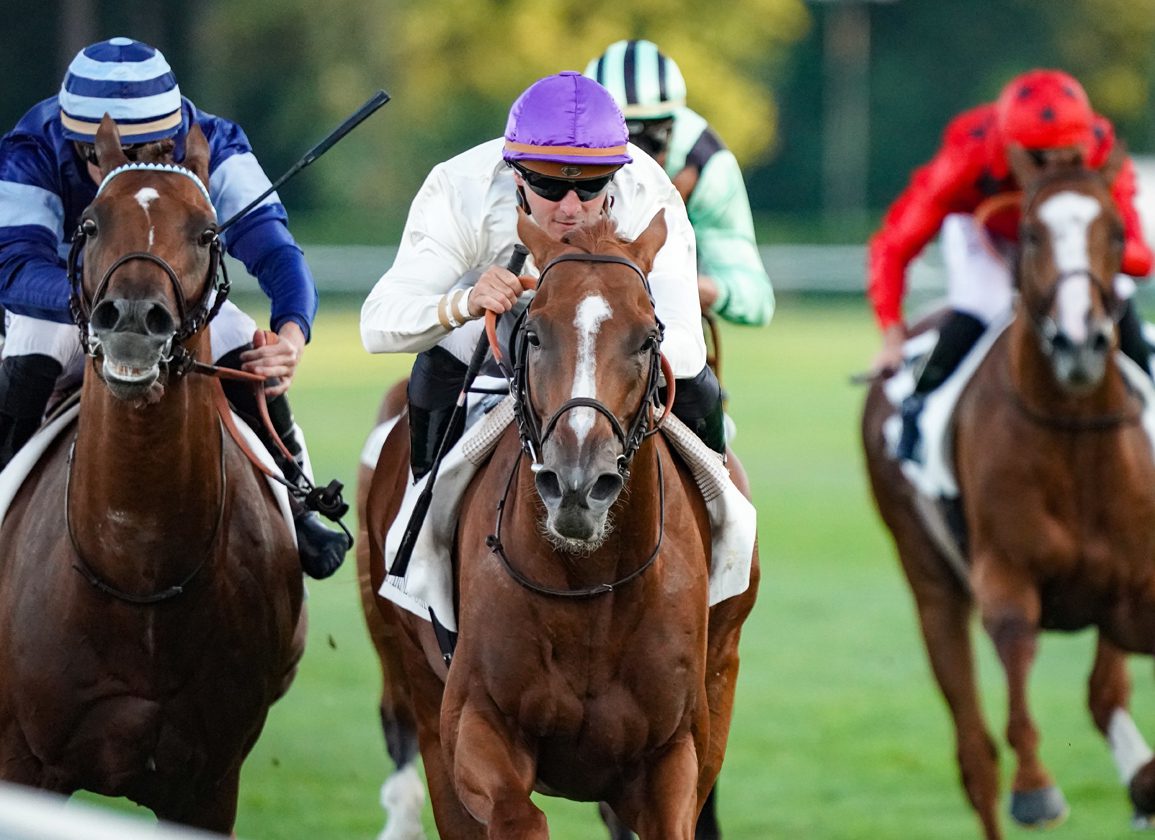 Unleashing his deadly acceleration to maximum effect at a ParisLongchamp blessed by evening sun, TDN Rising Star Onesto (Ire) (Frankel {GB}) stormed into the big time in Thursday's G1 Grand Prix de Paris. This type of performance had looked on the cards after his scintillating win in the 10 1/2-furlong G2 Prix Greffulhe at Saint-Cloud May 8 and highly commendable effort from a horror draw when dead-heating for fifth in the Prix du Jockey-Club and the Fabrice Chappet-trained chestnut was duly made the 10-3 favourite. Anchored last early by Stephane Pasquier having run freely to post, the first group 1 winner for his breeder Diamond Creek Farm who sported the colours of Gerard Augustin-Normand for the first time proved perfectly tractable in the race and saved energy tracking the other five. Producing the burst once straightened for home that is already his trademark over a 12-furlong trip that was certain to play to his strengths, he produced a 11.09 penultimate sectional to overhaul the long-time leader Simca Mille (Ire) (Tamayuz {GB}) a furlong from home. That rallying rival kept the winning margin to a neck only, with the Prix du Jockey-Club runner-up El Bodegon (Ire) (Kodiac {GB}) adding context 2 1/2 lengths back in third.

Since the move of the Prix du Jockey-Club to 10 1/2 furlongs, the draw has become vital with the last winner to have come from a double-figure stall being one of the Chantilly Classic's better ones in the talented New Bay (GB) in 2015. Onesto had fared reasonably well in the original draw in nine, but after the well-documented error he was re-posted to 14 and lost all chance at the start. Still able to get within a respectable distance of the impressive winner Vadeni (Fr) (Churchill {Ire}), he emerged from the race as one of a few who could be upgraded significantly. This trip looked truly up his street, hailing from the family of Juddmonte's great blue hen Hasili (Ire) by the stamina influence Frankel, whose 25th group 1 winner he duly became. He was also able to mark the win with the added bonus of supplying Sea The Stars (Ire) with his first group 1 winner as a broodmare sire. It capped a memorable week for the breeders, who had supplied the Fasig-Tipton July Sale-topping Curlin colt.

“He can be slightly too keen and Stephane did well to rate him,” Chappet said. “In the race, he was slightly too cold but when he made his move between horses two out he was right there to produce his turn of foot. In fact it turned out to be the perfect race for him. He ran a great race in the Prix du Jockey Club, but he was out if it turning for home because of his bad draw. You can have regrets because there is only one Derby in the life of a horse, but take nothing away from the winner–I am not saying we would have won.”

Onesto's winning debut over a mile at Chantilly in September had enough x-factor to earn TDN Rising Star status, containing the colt Vagalame (Ire) (Lope De Vega {Ire}) who would come to share fifth place with him when they re-engaged in the Jockey Club. Finding only Welwal (GB) (Shalaa {Ire}) too strong on his other juvenile start in a 7 1/2-furlong conditions event on Deauville's Polytrack in October, he was again behind that rival when eighth as Vadeni was fifth in this track's G3 Prix de Fontainebleau at a mile Apr. 17. It was only when he got to the Greffulhe that he hit his stride and Chappet has the big one back over this course and distance in mind now. “He's got plenty of speed, he can win 10-furlong races and he won a mile maiden but now the future is to target the Arc and we will go with some ambition,” he added. “This was a good trial, wasn't it? He will first go for the [G2] Prix Niel.”

Of Simca Mille, trainer Stephane Wattel said, “He ran a huge race and it was a great performance, so we have to be proud and he doesn't stop improving. We will see how he comes out of it–the [G2] Grand Prix de Deauville at home could be a possibility.”

Onesto is the second of five foals and first runner out of the unraced Onshore (GB) (Sea The Stars {Ire}), who was purchased by the aforementioned Diamond Creek Farm for 320,000gns at the 2016 Tattersalls December Mares Sale. She is a half-sister to the G3 Easter Cup winner Jet Away (GB) (Cape Cross {Ire}), while their dam is another who failed to get to the track in Kalima (GB) (Kahyasi {Ire}).

Kalima's full-sibling Hasili needs no introduction as Juddmonte's legendary broodmare and there was already proof that Frankel works well in this dynasty. So far, he is responsible for the G1 Metropolitan winner Mirage Dancer (GB), a son of Hasili's GI Matriarch S.-winning Heat Haze (GB) (Green Desert), the G2 Prix de Sandringham scorer Obligate (GB) and useful stayer Weekender (GB) who boast Hasili as a second dam. Kalima's half-sister Skiable (Ire) (Niniski) is the second dam of Frankel's G1 Fillies' Mile heroine and 1000 Guineas-placed Quadrilateral (GB). The dam's 2-year-old filly is by Australia (GB), she has a yearling filly by Gleneagles (Ire) and a filly foal by American Pharoah.