Frankel's Mostahdaf Stars In The Darley 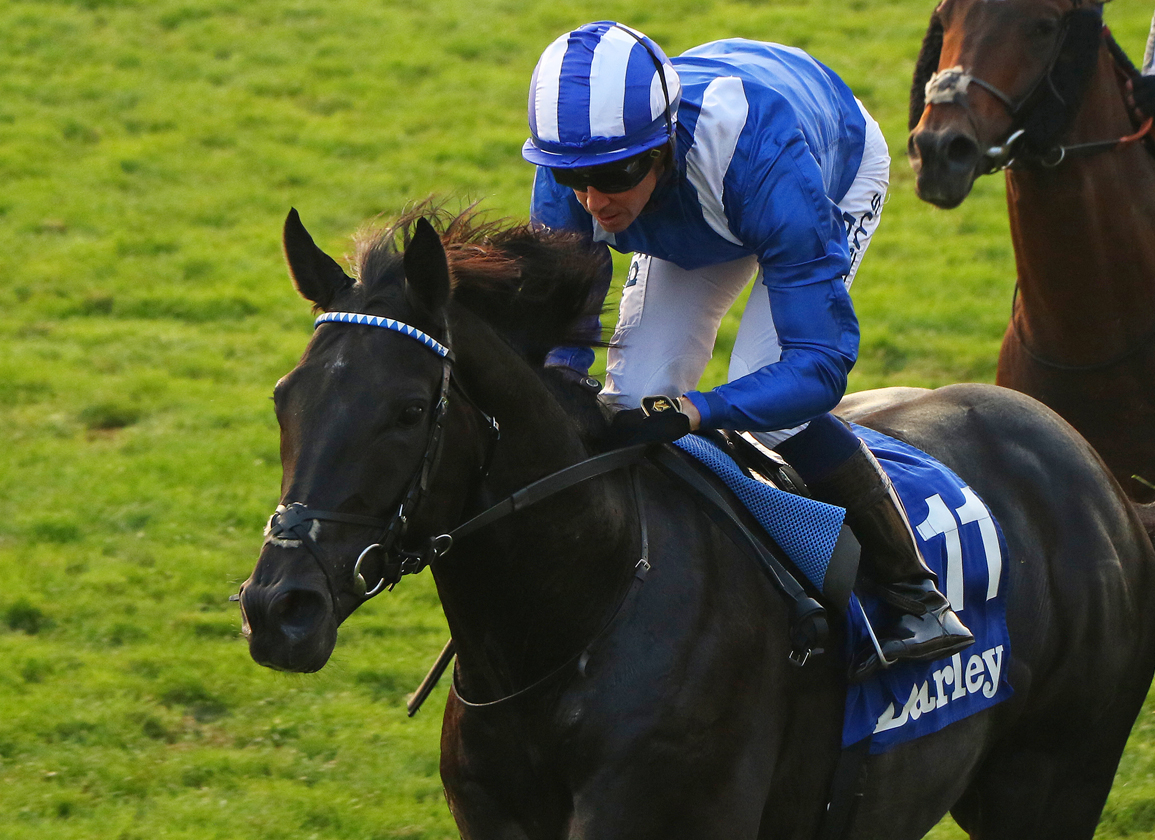 It may have been Godolphin's day up to the nine-furlong G3 Darley S., but the closer of Future Champions Day at Newmarket belonged to Shadwell's exciting prospect Mostahdaf (GB) (Frankel {GB}) as he rewarded the patience of connections with this career-best. Beaten only once so far when meeting trouble in running in 12th in the G1 St James's Palace S. at Royal Ascot June 15, the homebred half-brother to Nazeef (GB) (Invincible Spirit {Ire}) had shown the benefit of a subsequent break when returning with a success in Sandown's Listed Fortune S. over a mile on soft ground Sept. 15. Always travelling within himself just off the pace on the wing throughout the early stages, the 3-1 second favourite was committed by Jim Crowley on the front end with 1 1/2 furlongs remaining. Readily asserting from there, the homebred kept the course-and-distance Cambridgeshire H. winner Bedouin's Story (GB) (Farhh {GB}) comfortably at bay to score by 1 3/4 lengths. “He's done nothing wrong during his career. He was boxed in when he ran in the St James's Palace Stakes and never got a run, so that was the end of that,” John Gosden said. “His best trip is a mile and a quarter–we've always thought that–and I was going to run him in the Champion Stakes at Ascot next week, but I was overruled and that's why we ran here.”

Introduced over seven furlongs on Newcastle's Tapeta Mar. 16, Mostahdaf followed an easy win there with a defeat of well-regarded peers including the subsequent Listed Dee S. winner El Drama (Ire) (Lope de Vega {Ire}) in a mile conditions race on Kempton's Polytrack Apr. 5 which used to be known as the Easter S. when carrying listed status. After earning his Royal tilt in the Listed Heron S. at Sandown May 20, he was badly interfered with when launching his challenge two out and lost all chance as Poetic Flare (Ire) (Dawn Approach {Ire}) cut loose. His reappearance in the Fortune showed he had gone the right way since that reversal and this display was even smoother despite taking on proven older horses with more experience. “He's a classy horse and probably a horse for next year, but we will have a look at the race in Bahrain [the International Trophy],” Gosden Sr added. We'll have a talk about that with connections. He would go on good-to-firm and good-to-soft, he just wouldn't want it firm. Nazeef did exceptionally well as a four year old. She went from a Chelmsford handicap to winning two group 1s at four and not many do that. You do look at the family trait.”

Mostahdaf's aforementioned half-sister Nazeef improved with age and experience and annexed last year's G1 Falmouth S., G1 Sun Chariot S. and G2 Duke of Cambridge S., so the future looks bright for the latest progeny of Handassa (GB) (Dubawi {Ire}) to fly the flag of the Listed Garnet S. winner. She is kin to the GII San Gabriel S. winner and GI Frank E. Kilroe Mile-placed Desert Stone (Ire) (Fastnet Rock {Aus}) and his full-brother Euginio (Ire) who also took this prize in 2018 only to be disqualified due to a positive sample for a prohibited substance. The third dam Star (GB) (Most Welcome {GB}) produced the G1 July Cup-winning sire Pastoral Pursuits (GB) (Bahamian Bounty {GB}) and his G1 Haydock Sprint Cup-winning full-brother Goodricke (GB). Handassa's yearling colt is by Dark Angel (Ire), while she also has a 2021 full-brother to Mostahdaf.