Frankel's Inspiral Scintillating In The Coronation 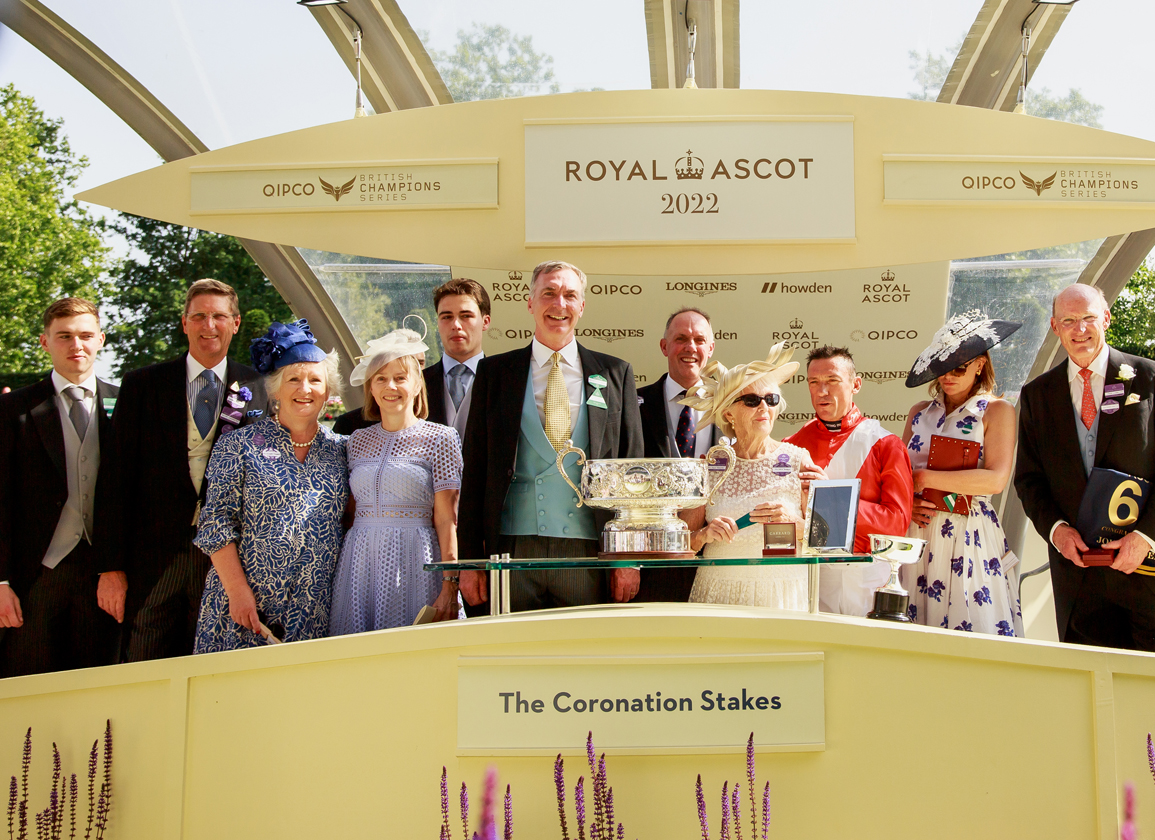 Lesser mortals than Frankie Dettori would had been in danger of imploding with his June hex, so it was with a large measure of relief that Cheveley Park Stud's Inspiral (GB) (Frankel {GB}) timed her dramatic reintroduction perfectly for Friday's G1 Coronation S. at Royal Ascot. It is clear after this emphatic display that her absence from the 1000 Guineas was a big miss, but the Gosdens were right to wait out the cold Spring and choose an English summer's afternoon that was as glorious as is as gets to present her in full bloom. Heavily-supported into 15-8 favouritism despite conceding race-fitness to all rivals, the homebred daughter of the 2012 Coronation runner-up Starscope (GB) (Selkirk) was not letting Frankie off lightly as she briefly increased the tension by breaking sluggishly and getting behind. Luckily, the tardiness was not of the Emily Upjohn variety and after some early freshness she came on strong as she had in the May Hill and Fillies' Mile to scythe through the field and surge to a 4 3/4-length defeat of Spendarella (Karakontie {Jpn}) and the short-headed Discoveries (Ire) (Mastercraftsman {Ire}). “When she fell out of the stalls, I thought 'here we go again' but she has put some good fillies to bed in great style,” her rider said. “It has been a very difficult week–tough, everyone at Clarehaven has been a bit down, but racing is like that and this is good for the team.”

When Royal Ascot comes around, it is generally the case that the contenders for the major events are already well into their stride and up into that hardened state that can only be achieved with racing experience. Like Mojo Star (Ire) (Sea the Stars {Ire}) on Thursday, Inspiral was forced to enter the heat of competition with just homework as a foundation and there was an air of vulnerability surrounding her that would have been unthinkable last term as she toyed with her peers at Newmarket and Doncaster. Her poise and demeanour in the parade ring said otherwise, however, and the market was saying that the Spring's great mystery was about to be stripped away.

As soon as the gates opened, it was as if the realisation that she was racing again took a second to dawn on her and by that time more than half the field were into their business with the 200-1 outsider Rolling the Dice (Ire) (Mehmas {Ire}) penning her in towards the back. On the home turn, Cachet (Ire) (Aclaim {Ire}) who had not gone as fast on the front end as had been expected, had a yawning seven-length advantage over the favourite and with just two behind there Frankie looked in trouble again. Applying one smack with the whip approaching two out, he got a ruthless response from Inspiral whose gear change was almost audible as she swooped on Discoveries before swamping Spendarella a furlong later. All anxieties subdued there, her devouring stride and undiminished appetite for domination took care of the rest. Her last two splits were 11.27 and 11.62 and her final three furlongs were completed in a rapid 35.01, much faster than Perfect Power (Ire) (Ardad {Ire}) managed in the G1 Commonwealth Cup.

“It took a long time for Inspiral to come to hand and John gave her the time she needed, then in her last couple of works she told us she was good to go,” Dettori said after steering his 77th Royal Ascot winner and one of his most welcome. “It was a question mark if she had trained on–she had pleased us, but we were still unsure. It didn't work out on Lord North, things didn't go right for Stradivarius, we were touched off in the Britannia and the colt [Reach For the Moon] was odds-on. I had the outsider in front of me and I had to avoid her, but I took the chance with the split and you need the horse to do that. She really took off, to the point that I was able to enjoy the last 50 yards for once!”

John and Thady Gosden were getting off the mark for the week and Gosden Sr said, “There was an element of relief at the furlong pole and surprise at the line. I asked Frankie coming in and he said we could go a mile and a quarter with her. Frankie didn't over-complicate, which he did yesterday but that's over, it's the past and we move on. You have races like the Nassau at Goodwood or you could go for the Prix Jacques le Marois at Deauville. She will meet the older horses now, but she does get weight from them which helps.”

Graham Motion, who had finished second in the race with Sharing (Speightstown) behind another Dettori-partnered seasonal debutante in Alpine Star (Ire) (Sea the Moon {Ger}) in this two years ago, was delighted with the performance of Spendarella. “She ran great–I could not be more proud of her,” he said. “William [Buick] had her in the perfect spot, she was very brave to hang on for second I thought. The winner's very good. She'll go back to the States now. I don't come over here just for the hell of it. We've run second a couple of times now, so I feel like I know what it takes. We don't have many opportunities in the States, which is kind of why this race made sense, this early in the season, and I think she's really a miler so we didn't miss out on much in the States.”

There was to be no family treble for Discoveries, who just held on from Tenebrism (Caravaggio) to manage a placing in the race her full-sister Alpha Centauri (Ire) won in similar style to Inspiral in 2018 and in which her aforementioned half-sibling Alpine Star followed suit in 2020, but Jessie Harrington was typically upbeat. “I am absolutely thrilled with Discoveries. She reversed the form from the 1000 Guineas and ran a great race,” she said. “The winner is obviously a very special filly, but I am delighted with our filly.”