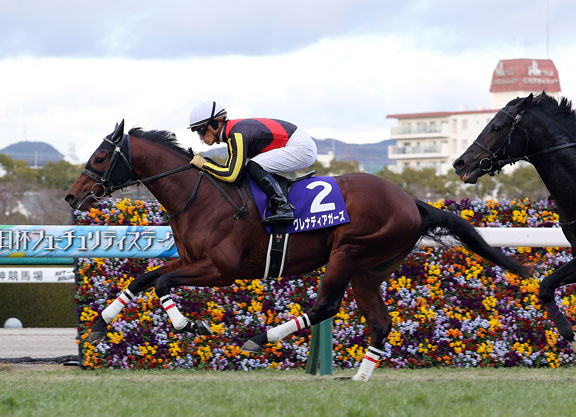 The bay colt graduated at third asking over 1400 metres at Hanshin last November, then belied odds of 16-1 to upset future G1 Satsuki Sho third Stella Veloce (Jpn) (Bago {Fr}) in the G1 Asahi Hai Futurity going this distance in mid-December. He has one run under his belt this year, a runner-up effort to pacesetting Rooks Nest (Jpn) (Maurice {Jpn}) in the G3 Falcon S. at the metric seven furlongs Mar. 20 for which he may have had a bit of an excuse.

“It was rough ground in the Falcon S. and I had the feeling he was very tensed,” trainer Mitsumasa Nakauchida commented. “That surely affected the finish, but he did give it his all. That race sharpened him up and he's much improved from last year.

Rooks Nest had the benefit of race fitness over Grenadier Guards in the Falcon, having finished second to Pixie Knight (Jpn) (Maurice {Jpn}) from well off the speed in the G3 Shinzan Kinen at Chukyo Jan. 10. A return to patient tactics could be in the offing given what is expected to be a cracking pace.

Schnell Meister (Ger) (Kingman {GB}) will be well-backed to become his successful young sire's second winner at group level in Japan (Elizabeth Tower {GB}, G2 Tulip Sho). A debut winner going 1500 metres at Sapporo last September, this first foal out of 2016 G1 Preis der Diana (German Oaks) winner Serienholde (Ger) (Soldier Hollow {GB}) showed a devastating turn of foot when taking out a one-mile conditions test at Nakayama in December. The bay was a latest on-pace second in the G2 Yayoi Sho (2000mT) Mar. 7, the form of which was franked when the victorious Titleholder (Jpn) (Duramente {Jpn}) filled the second spot in the Satsuki Sho.

Bathrat Leon (Jpn) (Kizuna {Jpn}), third in the Shinzan Kinen, has won his last two in wire-to-wire fashion, a Hanshin conditions Mar. 13 ahead of a five-length success in the Apr. 10 G2 New Zealand Trophy in which the runner-up Time to Heaven (Jpn) (Lord Kanaloa {Jpn}) raced brutally wide throughout.

Rickenbacker (Jpn) (Lord Kanaloa {Jpn}) required six tries to break his maiden, but was held up at a crucial stage of the Apr. 17 G3 Arlington Cup and charged home once into the clear to finish a very good second to Ho O Amazon (Jpn) (King Kamehameha {Jpn}) at odds of 42-1. A similar price is expected Sunday, but he could appeal to each-way bettors.