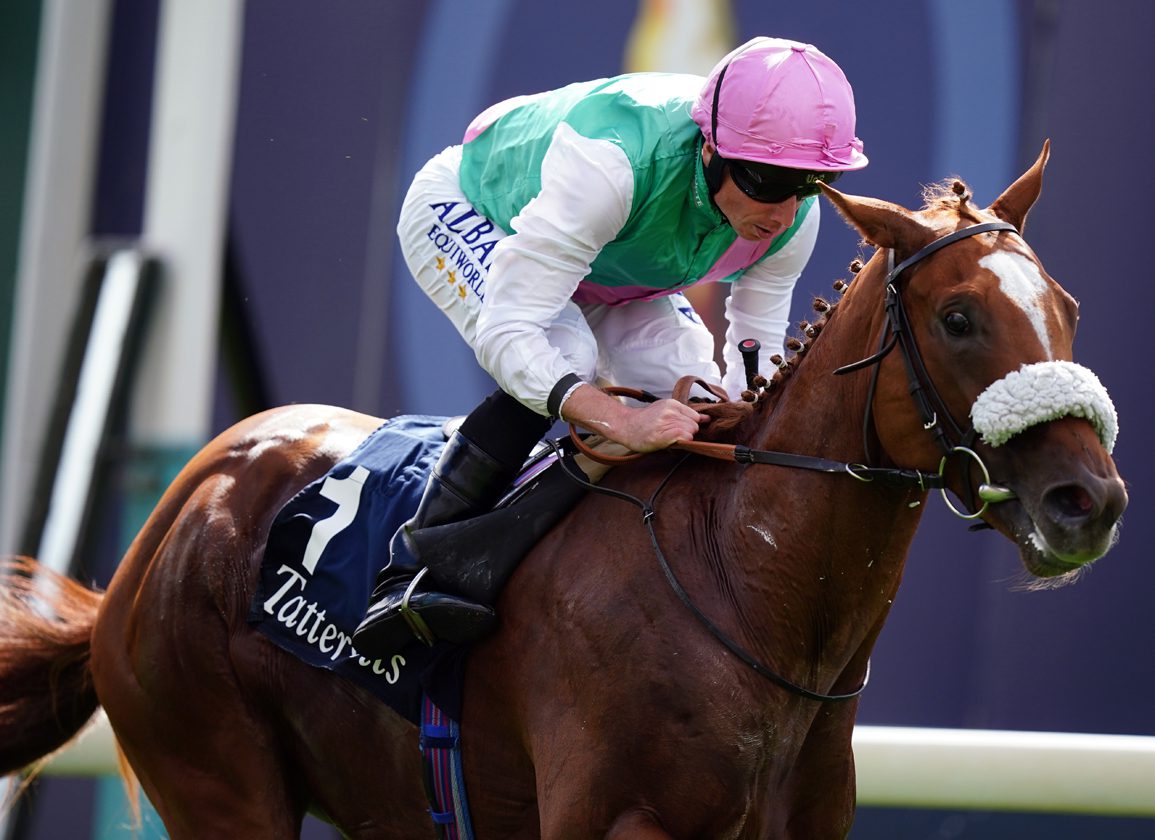 Juddmonte's 550,000gns Tattersalls December foal Chaldean (GB) (Frankel {GB}–Suelita {GB}, by Dutch Art {GB}) bettered a June 30 debut fifth going six furlongs at Newbury with a July 15  breakthrough upped to seven back there last time and continued on an upward trajectory with a game victory in Wednesday's G3 Tattersalls Acomb S. at York. The 7-2 second favourite settled into a comfortable rhythm in second after the early exchanges and inched to the front at halfway. Coming under pressure approaching the quarter-mile marker, he was far from undone when headed by Indestructible (Ire) (Kodiac {Ire}) just inside the furlong pole and rallied bravely in the closing stages to deny that Irish raider by a half length. Ed Bethell trainee Oviedo (Ire) (Lope De Vega {Ire}) was best of the rest and finished 3 1/4 lengths further adrift in third. Godolphin's 'TDN Rising Star' and 5-2 favourite Local Dynasty (Ire) (Dubawi {Ire}) was unable to land a telling blow and finished a never-nearer fifth.

“He's a lovely horse and Andrew [Balding] has been very happy with him since he joined him in February,” said racing manager Barry Mahon. “He's very straightforward, he's done it well and he was gutsy. Ryan [Moore] feels like he'll step up to a mile on his next start, which is good, so we'll get him home and see what's available and make a plan from there. He's quite a young horse, being a middle-of-May foal, and I'd imagine he has quite a bit more developing and growing to do, so we won't over-race him this year. Quite rarely, he's a purchase by Juddmonte. He cost 550,000 guineas and in fairness to the [Abdullah] family, they put down their money for him as foal and he's repaying them now. We'd buy less than 10 horses a year, so it's a very small percentage of our business, but when we see something that looks nice and can enhance our stable, the family are keen to add to it. He'll have no problem staying a mile and who knows, he could even get a little bit further next year. We'll see how the rest of the year develops. It's 10 years since Frankel won the Juddmonte International here and he's leaving his mark with every week that goes by. It's very special and it's lovely to have one winning by him in the Juddmonte colours.”

Trainer Michael O'Callaghan rued what could have been after runner-up Indestructible failed to live up to his moniker and said, “I'm delighted he ran well and to the level we thought he was capable of, but it's bitter sweet. He's still a raw horse and he's going to improve plenty. It was a messy race and Rossa [Ryan] said he was still very green. What I can take hope from is that when he hit the front, Rossa said he just pricked his ears. He felt he was on the best horse in the race and immaturity has got him beat. He thinks he's one of the best colts he's got to look forward to. He won well the last day and didn't learn a lot, but pricking his ears is a sign of a horse who will keep on improving.”

Ed Bethell was pleased with the run of Oviedo in third, but felt a better trip may have aided his charge's cause. “He's run a tremendous race,” the trainer commented. “It was a bit of a mess as they went no pace and then he got trapped behind the one horse we didn't want to be behind, but that's life. He quickened twice, which I liked, and had we had a smoother run we would have been closer. He looks like he'll get a mile, he's well entered and I'm quite glad he's justified it. He's in the Goffs Million over a stiff seven [furlongs] at the Curragh and the [G2] Champagne at Doncaster and he's worth his place in them.”