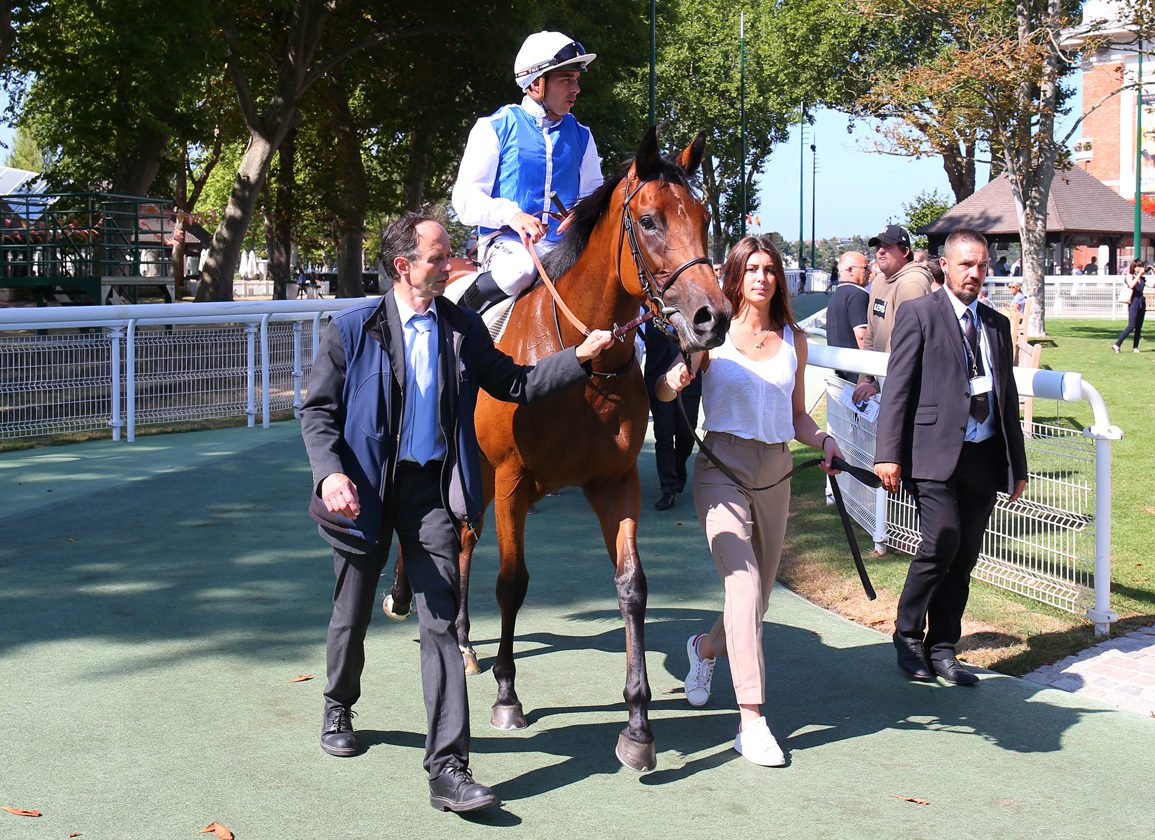 Leaving a deep impression on debut at Deauville on Thursday, the Wertheimers' Left Sea (GB) (Frankel {GB}–Left Hand {GB}, by Dubawi {Ire}) earned TDN Rising Star status with a five-length success in the Prix de la Reboursiere over a mile. A daughter of their G1 Prix Vermeille heroine from the family of Plumania (GB) (Anabaa), the Carlos Laffon-Parias trained bay was nobody's secret as the 8-5 favourite and was allowed to establish an instant lead by Maxime Guyon. Kicking in early straight, the homebred registered a penultimate sectional of 11.19 as she stretched to the impressive winning margin over the Freddy Head-trained Brandywine (Fr) (Wootton Bassett {GB}), with another 1 1/2 lengths back to Dschingis Grace (Fr) (Dschingis Secret {Ger}) in third. “She is a very nice filly and we always liked her,” Laffon-Parias commented. “She has confirmed what we have seen at home and is in all the major races, including the Fillies' Mile.” Video, sponsored by TVG.

Remember the name! Frankel filly Left Sea destroys her opposition on debut in the Wertheimer silks for Carlos Laffon-Parias and @maximeguyon_off at @fgdeauville… pic.twitter.com/o7eKzEQKq3

The sire's second TDN Rising Star at the current Deauville August Festival after Kelina (Ire) and his 33rd in total, Left Sea is the second and currently last known foal out of the aforementioned Vermeille heroine and G1 Prix de Diane runner-up Left Hand, who is a daughter of the G2 Prix de Royallieu scorer Balladeuse (Fr) (Singspiel {Ire}). Balladeuse also produced the listed scorer Bilissie (GB) by Dansili (GB) and her full-sister Romanciere (Ire), who was placed on several occasions at group level including when third in the G1 Prix Jean Romanet.

The third dam Featherquest (GB) (Rainbow Quest) also threw the aforementioned Plumania, a past TDN Rising Star who went on to glory in the G1 Grand Prix de Saint-Cloud before producing the G2 Prix du Muguet winner Plumatic (GB) from a mating with Left Hand's sire Dubawi. Other descendants of Featherquest, who is a half to the leading sire Groom Dancer, include Solsticia (Ire) (Le Havre {Ire}) who was third in the G1 Prix Saint Alary and Frankel's smart Rumi (Fr) who captured last year's G2 Prix de la Nonette and G3 Prix Vanteaux.