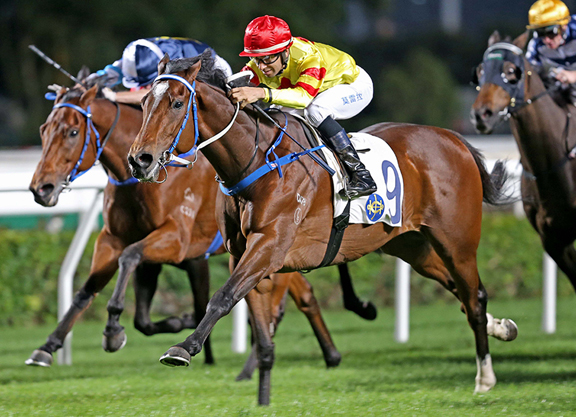 Ten years on from his lone success in the Hong Kong Classic Mile with Lucky Nine (Ire) (Dubawi {Ire}), trainer Caspar Fownes starts two of the three top-rated gallopers in the first of the three legs of the 4YO Classic Series at Sha Tin Sunday afternoon.

Enrich Delight (Aus) (Medaglia d'Oro) will try to give his sire back-to-back winners of the Classic Mile, following on the success of Golden Sixty (Aus) last year, and has done little wrong in two Class 2 appearances over 1400 metres. A maiden winner and Group 3-placed for Anthony Freedman in Australia while racing as Chenier (Aus), the bay overcame a troubled trip to score on debut Nov. 29 and, after missing an intended start Dec. 13, finished a close, but luckless third, Jan. 10. Enrich Delight has the services of two-time Classic Mile-winning jockey Christophe Soumillon.

Sky Darci (NZ) (Darci Brahma {NZ}) is the selection of Joao Moreira and won his first three starts of this term, including a defeat of Lucky Express (Aus) (Toronado {Ire}) in a Class 1 over course and distance Nov. 29 and was a latest second to the reliable Champion's Way (Aus) (Hinchinbrook {Aus}) in open Group 3 company Jan. 1 after sitting a far inferior trip.

David Hayes sent out two Classic Mile winners during his previous stint in Hong Kong and tightens the girth around three runners Sunday. Shadow Hero (Aus) (Pierro {Aus}), whose sire accounted for 2019 winner Furore (NZ), was trained by Hayes to victories in the 2019 G1 Spring Champion S. and 2020 G1 Randwick Guineas, and hasn't been a true factor in two local runs after slow starts. To that end, Hayes is removing the blinkers and adding cheek pieces to the gelding, who ran on strongly to be third behind Tourbillon Diamond (Aus) (Olympic Glory {Ire}) Dec. 13. Zac Purton retains the ride.

The latter was well-tried in Australia for trainer Stuart Kendrick and closed out the 'Eric the Eel' portion of his career with a third in the G1 Australian Derby last April. His two local appearances for Danny Shum have been very promising, first storming home to be third behind Enrich Delight at 70-1 Nov. 29 before weaving through heavy traffic to be late on the scene last time.

Lucky Express has been in the top three in six of his eight Hong Kong starts and was a last-out third off a three-wide, no-cover trip over track and distance Jan. 1. He has place claims at rough odds.