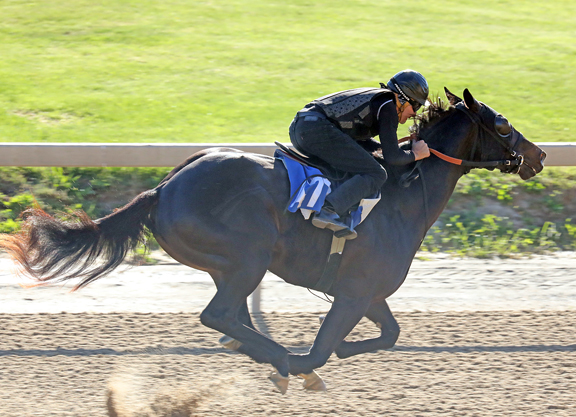 TIMONIUM, MD – Four juveniles shared the co-fastest furlong time of the week during the third and final session of the under-tack show for next week's Fasig-Tipton Midlantic 2-Year-Olds in Training Sale at the Maryland State Fairgrounds Thursday.

A colt by Midnight Storm (hip 477) was the first to record the :10 flat bullet time Thursday when working early in the day's first set for consignor James Layden.

“I was really pleased with that,” Layden said of the work. “He's been doing good all year and I just wanted him to show up today when it counted.”

The dark bay colt is out of Freedom Come (Lit de Justice) and is a half-brother to graded stakes winner Harlem Rocker (Macho Uno). Layden purchased the youngster for $8,000 at last year's Fasig-Tipton October sale.

“He just looked the part to me,” Layden said of his impressions of the colt last fall. “He was a good solid colt and I just liked the way he looked.”

In addition to his bullet work, hip 477's prospects in the sales ring next week should also be bolstered by the popularity of his first-crop sire. Midnight Storm, winner of the 2016 GI Shoemaker Mile S., stands at Taylor Made Farm for $7,500. The stallion was represented at last month's OBS April sale by a trio of six-figure juveniles, led by a colt who sold for $550,000.

“I am right happy with it,” Layden said with a smile when asked about the stallion's popularity in the sales ring this spring. “I didn't think he would be as hot as he actually is. I didn't think they would be quite this precocious.”

Torie and Jimbo Gladwell's Top Line Sales sent a filly by Palace (hip 515) out to share the :10 flat bullet Thursday morning. Out of Honky Tonk Angel (Bluegrass Cat), the bay is a half-sister to stakes-placed Tapiz Dream (Tapizar).

“It's hard to say we were expecting :10 flat, but we were,” admitted Jimbo Gladwell. “She had worked really good at the farm, exceptional, and she prepped good here last week. We knew she was the fastest one we brought up here and it was just a matter of if she'd do everything right. This track is a little tough to gauge sometimes and it doesn't take much of a hiccup to knock a tick or two off, so we were just hoping she would do everything right and she did.”

The filly was purchased by the Grade I Investments of Gladwell's sister and brother-in-law Nellie and Chetley Breeden for $8,000 at last year's Fasig-Tipton February sale.

“They have been doing some pinhooking and partnerships and Nellie helps my dad break and train his horses,” Gladwell said. “[Picking the filly out] was her and my brother-in-law and my dad, so all credit goes to them. They've trained her and got her ready all year. We've literally had her for two weeks up here. We will take most of the credit, but they've done most of the work for sure.”

Top Line Sales, which had its first seven-figure sale when bloodstock agent Gary Young purchased future Grade I winner Princess Noor (Not This Time) for $1.35 million at last year's OBS April sale, decided to skip the 2020 Timonium sale, but the Gladwells are happy to be back in Maryland.

“We had a small group coming up here last year and we were going to come, but we had a few horses chip and need surgery and just a few little things go wrong,” Gladwell said. “It just felt like everything was telling us to stay home, so we did. But it's great to be back. We hated missing it. It was a heck of a sale last year and the breeze show looks like it was well-attended up there in the bleachers this week. Fasig-Tipton does a great job of getting people here and they are going to put on a top-class sale here next week.”

Ciaran Dunne's Wavertree Stables had its second bullet work of the week when a colt by Nyquist (hip 524) worked the furlong in :10 flat Thursday. The chestnut is out of In It For the Gold (Speightstown), a daughter of multiple Grade I placed All Due Respect (Value Plus). Bred by Fifth Avenue Bloodstock, the juvenile was a $67,000 Keeneland January short yearling and was purchased by BRD Racing for $60,000 at last year's Keeneland September sale.

Wavertree topped the Fasig-Tipton Gulfstream sale in March when selling a colt by GI Kentucky Derby winner Nyquist for $2.6 million to Coolmore.

Hip 394, the final horse in Thursday's second set, was the last of the three-session under-tack show to complete his furlong in :10 flat. Consigned by Joe Deegan's Shamrock Stables, the bay colt by Maclean's Music is out of multiple stakes winner Coco Belle (Storm Boot). He was purchased privately after RNA'ing for $14,000 at last year's Keeneland September sale.

“I bought him in September with Ted Campion,” Deegan, a trainer and former jockey, said. “He did really well over the winter. He toed out a little bit when he was a yearling, but he straightened up when he grew, his shoulders came out. He's a very athletic horse.”

Of the colt's work Thursday, Deegan added, “I expected him to work well, but you never know until they do it. He had prepped really nice and he's always done it very easy. This is the most we've ever asked him to do. Up to this, we've just done small bits and small bits to have him just come here needing and wanting to do it. He was happy doing it and he galloped out strong.”

Deegan came to the Midlantic sale with a pair of juveniles, both of whom worked on the under-tack show's final day. After hip 394's work, the Irishman had to wait again until the session's sixth session for his colt by Cupid (hip 441) to work in :10 3/5.

Asked if the waiting was indeed the hardest part, Deegan said, “It is, but you've got to wait your turn. I'd like to have it over with.”

A colt by Empire Maker (hip 550) turned in the fastest quarter-mile drill of Thursday's session, covering the distance in :21 4/5 for de Meric Sales. The juvenile is out of Lady Pewitt (Orientate) and is a half-brother to champion 2-year-old filly Jaywalk (Cross Traffic) and to multiple stakes winner Danzatrice (Dunkirk). Bred by Gainesway, he was purchased by Danny Pate for $40,000 at last year's Fasig-Tipton October sale. His full-sister sold for $2 million at the 2019 Keeneland September sale.

During the three-day under-tack show, 11 juveniles shared the :10 flat bullet furlong time and a pair of youngsters shared the bullet quarter-mile time of :21 2/5.

The Midlantic sale will be held next Monday and Tuesday with bidding commencing each day at 11 a.m.