Fountain of Youth Trio All Have Something to Prove 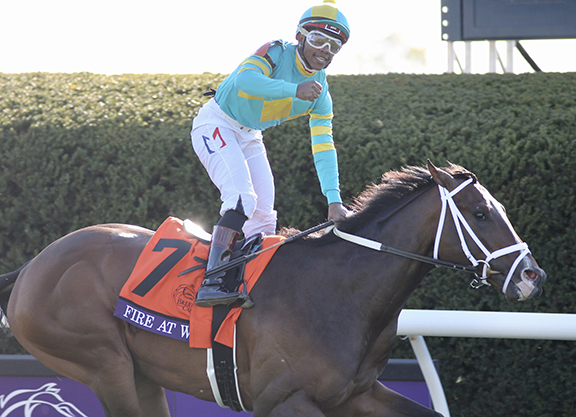 There's little doubt that 3-year-olds Drain the Clock (Maclean's Music), Fire At Will (Declaration of War) and Prime Factor (Quality Road) are talented individuals. But whether or not they are legitimate contenders for the GI Kentucky Derby is a question each one will have to answer in Saturday's GII Fasig-Tipton Fountain of Youth S. at Gulfstream Park.

The mile-and-a-sixteenth Fountain of Youth, which drew a field of 10, has a clear favorite in Greatest Honour (Tapit), the Shug McGaughey-trained winner of the GIII Holy Bull S. But whether or not he wins may depend on how Fire at Will handles the dirt, how well Drain the Clock can handle two turns and whether or not Prime Factor can rebound off a third-place finish in the Holy Bull as the even-money favorite. From his main competition, there have been more questions than answers.

Of the group, Fire At Will, a Breeders' Cup winner, is the most accomplished. Trained by Mike Maker, he finished off his 2-year-old campaign with wins on the grass in the GII Pilgrim S. and the GI Breeders' Cup Juvenile Turf. By Declaration of War out of a Kitten's Joy mare, Fire At Will has a strong turf pedigree, but trainer Mike Maker wants to find out if he can handle the dirt against top company. In his lone start on the main track, he won the off-the-turf With Anticipation S. last summer at Saratoga.

“We thought he deserved a chance and there aren't many races of any significance on the turf for him right now,” Maker said. “This is the time to try something like this. Hopefully, he'll run as well on a fast track as he did on a sloppy track.”

Fire At Will has never worked on the turf and has had a steady diet off five and six furlong breezes since the Holy Bull.

“He's a very efficient mover and is professional,” Maker said. “You can't knock him at all.”

Drain the Clock's only career defeat came when his rider lost an iron in the Jean Laffite S. at Delta Downs. Otherwise, he's proven to be among the best 3-year-old sprinters in training. He won the Limehouse S. by 7 1/2 lengths and then came back to blow away the competition in the GIII Swale S. at seven furlongs. Trainer Saffie Joseph knows that he has a good horse, but can't be certain how far he will go.

“So far, he has done everything that we have asked and the one blemish on his record was not his fault,” Joseph said. “This will be his first time at a distance and, in the back of your mind, you always wonder how that will turn out.”

As Joseph sees it, it makes perfect sense to experiment in the Fountain of Youth.

Drain the Clock should benefit from the draw. He drew the one hole, arguably the best post in the race, and should have no problem taking control early without much other speed signed on.

'TDN Rising Star' Prime Factor will start just outside of Drain the Clock in the two post. He looked sensational when breaking his maiden by 8 3/4 lengths in his first career start. A $900,000 yearling purchase trained by Todd Pletcher, he became one of the most hyped horses of the early winter, but couldn't back that up when finishing third, beaten 9 1/2 lengths in the Holy Bull. The question Saturday will be whether or not he can run back to his debut.

“I don't know if it was an easy decision to go in this race or not,” Pletcher said. “The horse made it easier by training well since the Holy Bull. The harder decision was going in the Holy Bull off one six-furlong start; Ideally, we would have liked to have found an allowance race for him and made a more gradual progression into a graded stakes.”

Pletcher hopes that Prime Factor learned enough in the Holy Bull that he will take a step in the right direction Saturday.

“We're hoping that the lack of seasoning and experience was the reason why he didn't run as well as we had hoped in the Holy Bull,” he said. “He's come back with a couple of good breezes. I was disappointed with his last race. We didn't go out there to finish third by nine. But we think we had some legitimate reasons for it and I think it's logical that he will move forward after having that experience.”

The Holy Bull field, from the rail out, consists of Drain the Clock, Prime Factor, Sososubtle (Speightster), Fire At Will, Jirafales (Social Inclusion), King's Ovation (Not This Time), Tarantino (Pioneerof the Nile), Greatest Honour, Tiz Tact Toe (Tourist) and Papetu (Dialed In).

This story was posted in Shared News and tagged Drain the Clock, Fire At Will, Florida Derby, Fountain of Youth, Gulfstream Park, Kentucky Derby, Prime Factor.