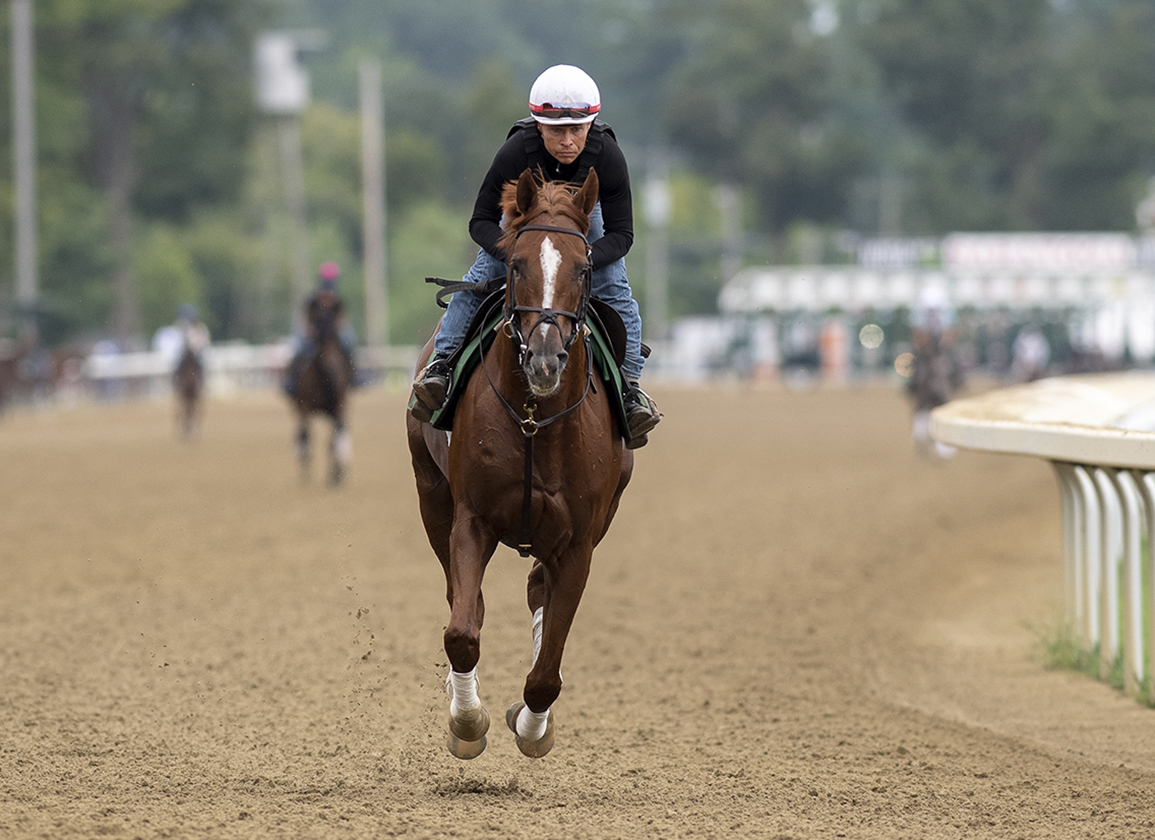 Don Alberto Stable's Forza Di Oro (Speightstown) has shown considerable talent in six starts dating back to his debut in September of 2019, and he'll finally get his chance at the highest level as a likely favorite in Saturday's 10-furlong GI Jockey Club Gold Cup, being run at Saratoga for the first time in the race's storied history.

Running a huge race after a disastrous start to be second at 31-1 in his unveiling, the homebred graduated next out, but took a major step backward when finishing eighth, beaten 24 1/4 lengths making his stakes debut in the GII Remsen S. Shelved for over 10 months, he returned last October at Belmont with a game 10-1 first-level allowance score and announced himself as a horse to watch in 2021 when closing out his sophomore season with a powerful 3 3/4-length success in Aqueduct's GIII Discovery S. He faced another setback, however, and went unseen until earlier this meet, returning with a three-length allowance/optional claiming victory in the Spa mud July 21.

Wertheimer and Frere's Happy Saver (Super Saver) will look to become the 11th horse to win back-to-back renewals of the Jockey Club Gold Cup, which has been run since 1919. Named a 'TDN Rising Star' off a powerful 5 1/2-length debut victory last June at Belmont, the chestnut repeated by four lengths in a local allowance and stayed unbeaten with a conquest of the Federico Tesio S. at Pimlico. Rather than attempt the GI Preakness S., trainer Todd Pletcher took on elders in this event and Happy Saver rewarded his confidence with a hard-fought score over fellow 3-year-old and future G1 Dubai World Cup romper Mystic Guide (Ghostzapper). He made his 4-year-old bow with a workmanlike allowance/optional claiming tally May 28 at Big Sandy and ran third with a wide trip last out in the sloppy-track GII Suburban S. there July 3.

“I don't think he ran that badly on an off track last time,” Pletcher told the NYRA notes team. “The way the race unfolded going a mile and a quarter at Belmont and drawing the outside is never a good thing. I thought he ran well all things considered. He kept closing and it was his only his second start of the year, so hopefully he moves forward.”

Besting Happy Saver and Mystic Guide in the Suburban was 11-1 upsetter Max Player (Honor Code), who re-opposes here. An impressive winner of the GIII Withers S. last February, the dark bay ran third in both the GI Belmont S. and GI Runhappy Travers S. and was transferred from Linda Rice to the Steve Asmussen barn to check in fifth in the GI Kentucky Derby and Preakness. Unable to make an impact in the G1 Saudi Cup or GIII Pimlico Special Match Series S., Max Player finally got back to the winner's circle with his resolute neck success in the Suburban.

Rounding out the major contenders is peaking Night Ops (Warrior's Reward) for the skyrocketing Brad Cox barn. Mostly a middling allowance horse for his first two seasons, he scored his first graded stakes win in last summer's GIII Prairie Meadows Cornhusker H. The bay hasn't found the mark in six starts this year, but has racked up four seconds and two thirds, all in stakes races, and is coming off a career-best 101 Beyer when runner-up to last Friday's GII Charles Town Classic hero Art Collector (Bernardini) in the restricted Alydar S. here Aug. 6.