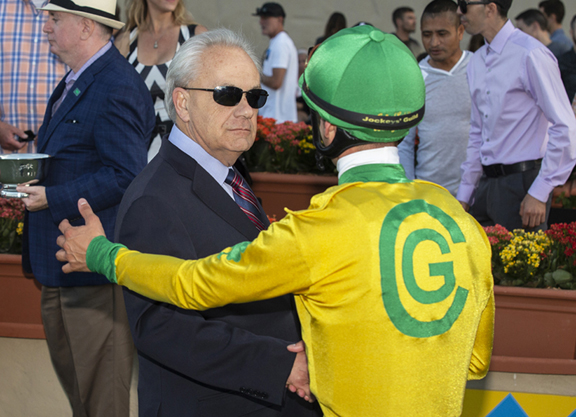 Dan Ward, a longtime assistant to trainer Jerry Hollendorfer, will operate a stable of his own at the upcoming Del Mar meet.

The story was first reported by the Daily Racing Form‘s Steve Anderson.

The TDN spoke to Hollendorfer’s attorney Drew Couto early Friday and he confirmed that Hollendorfer himself will not be entering any horses when entries are taken for the opening day card. Del Mar opens Wednesday and entries for the first card will be taken Saturday.

Though Del Mar has yet to make any official announcements concerning Hollendorfer’s status for the meet, they did not allocate him any stalls. That does not necessarily mean that Hollendorfer could not at least attempt to enter horses to race at Del Mar, a move that could have brought the California Horse Racing Board (CHRB) into the controversy. Couto said it was decided that, for now, that would not be the best course of action.

“One of Jerry’s main concerns right now is making sure that his long-time employees are taken care of and that so are the owners who have been very loyal to him over the years. For now, that’s his main focus,” Couto said.

In an earlier interview with the TDN, Couto maintained that Del Mar was likely to ban Hollendorfer because it was afraid of the “PR risks” involved with allowing him to run.

“I have my trainer’s license, insurance and stalls at Del Mar and am ready to go,” Ward said via text.

When asked about his feeling about taking over for Hollendorfer during difficult times, Ward replied: “His concern for his employees during this has given me even more respect for him than I even had before.”

Ward added that he is not sure how many stalls he will have because some details still need to be worked out over horses that are co-owned by Hollendorfer. But he will have what is perhaps the stable’s biggest star, Vasilika (Skipshot). The mare, who has won four straight and 12 of her last 13, is being pointed for the GII Yellow Ribbon H.

Ward has not started a horse under his own name since 1987, when he went two for nine. He was an assistant to Bobby Frankel from 1976 through 1998 and has worked for Hollendorfer since 2007.

A similar situation has unfolded at the NYRA tracks, where Hollendorfer has also been denied stalls and not allowed to enter horses. Several horses that had previously been trained by Hollendorfer were turned over to another assistant, Don Chatlos.

Hollendorfer was banned by The Stronach Group from its two California tracks, Santa Anita and Golden Gate Fields, after a fourth horse of his had to be euthanized June 22 during a Santa Anita meet in which there were 30 equine fatalities. However, the CHRB took no action against Hollendorfer, meaning he is not serving or appealing any suspensions. Tracks have often used the rights given to private property owners to ban individuals without going through the norms of due process. Del Mar could be in a different situation because the land the track sits on is owned by the State of California.

After the Santa Anita ban, Hollendorfer was permitted to stable and race at Los Alamitos.