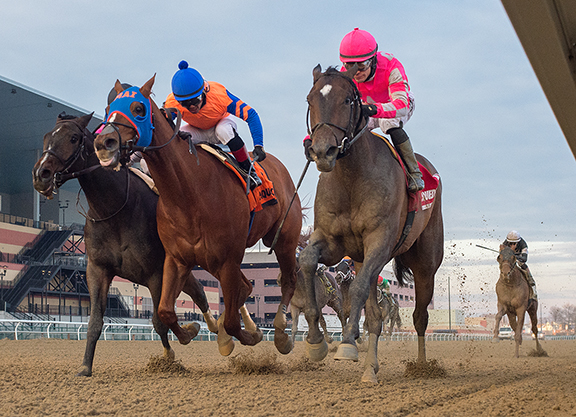 Tax went from claimer to graded winner and GI Kentucky Derby candidate with a victory in Aqueduct’s GIII Withers S. Saturday. Stumbling at the start, the 2-1 chalk quickly recovered, moving up the fence from his rail draw to take command, but was soon passed by Not That Brady, who put up an opening quarter in :23.56. In a three-way duel for second as that foe clocked a half in :47.39, the dark bay was shuffled back into a joint third, but reasserted up the fence entering the lane. Taking command in mid-stretch, Tax held off a stubborn Not That Brady and a determined Our Braintrust to score. Our Braintrust’s trainer Mark Casse lodged an objection against Not That Brady for interference in the stretch, but the result was left as is after a steward’s inquiry.

“He ran really good today,” trainer Danny Gargan said. “I think down the backside, he got a really good education. Junior [Alvarado] said he was really impressed with him. He said he kind of got stuck down in there and clipped heels a couple of times.”

The conditioner added, “As far as our next spot, we’ll look at the [GII] Tampa Bay Derby [Mar. 9], also the [GIII] Jeff Ruby [Steaks S. Mar. 9] at Turfway Park. Somewhere like that, a two-turn race. I don’t want to back him up, the [GIII] Gotham [S. Mar. 9] is a one-turn mile and I think that’s a sprinter’s race. So, we’ll probably come out of this race and go somewhere like that and probably come back here for the [GII] Wood [Memorial S. Apr. 6]. He’s definitely going to run between now and the last prep so I can get three races in if we get lucky enough to get to the [Kentucky] Derby.”

“I was hoping the hole would open up and I got lucky and got through,” Alvarado said of the trip. “He responded right away when we got the space, it was just enough for him. When we got to the lead at the sixteenth pole he started waiting again for the horses. He’s a big guy, but mentally he’s not 100% in the game yet. He’s still learning and today was a great learning experience for him.”

Second on debut sprinting at Churchill Downs Sept. 29, Tax was claimed from breeders Claiborne Farm and Adele Dilschneider and trainer Ben Colebrook for $50,000 by Gargan and Hugh Lynch out of a winning effort in a two-turn test at Keeneland Oct. 21. Corms Racing Stable joined the ownership and Gargan sent the colt to this venue’s GII Remsen S. Dec. 1, where he finished third behind ‘TDN Rising Star’ Maximus Mischief (Into Mischief). Randy Hill’s R A Hill Stable and Dean and Patti Reeves’s Reeves Thoroughbred Racing bought into the colt following that effort.

Tax is the 39th graded winner and 67 black-type winner for his late sire Arch. The winner is a son of Toll, who did not produce a foal in 2017, but had an Orb colt in January of 2018 and was bred back to Blame. His second dam is MGSW & GISP Yell (A.P. Indy), who produced GISP Chide (Blame) and SW Cheery (Distorted Humor), the dam of MGISW and ‘TDN Rising Star’ Elate (Medaglia d’Oro). This is also the family of GISW Eastern Echo (Damascus); MGSW & MGISP new sire Ironicus (Distorted Humot); MGSW On Leave (War Front); GSW & GISP sire Congrats (A.P. Indy); and graded winners Norumbega (Tiznow), Hunting (Coronado’s Quest) and Quiet Harbor (Silver Deputy).