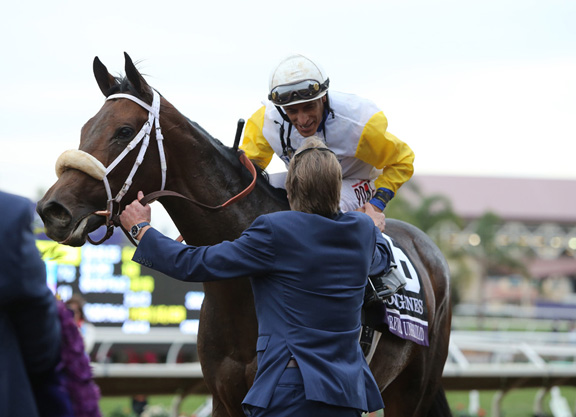 “I'm just blessed,” said winning trainer Dallas Stewart, who captured the 2001 Distaff with another daughter of Unbridled's Song, Unbridled Elaine. “She's such a great filly. A championship was on the line and she's three-for-three. She ran great and I'm proud of Johnny [Velazquez] and how he rode her.”

Of a rider controversy that will have Fipke paying both Velazquez and Joel Rosario, who had the original call on the mare in the race, Stewart added, “Joel is a great rider and those are two great jockeys, but I'm focused on the horse. She's had that spacing and she's been very successful with that.”

Forever Unbridled was racing third-last out of the stretch for the first time as 2016 GI Breeders' Cup Juvenile Fillies winner Champagne Room (Broken Vow) took them along at what appeared to be a pedestrian tempo, with 'TDN Rising Star' Paradise Woods (Union Rags) her closest pursuer.

Forever Unbridled, sixth in the early going, was taken out into about the four path at midway for a clear shot when push came to shove. John Velazquez hit the gas at the three-eighths and the homebred mare showed her trademark acceleration, rolling up outside of a hard-ridden favorite Elate to challenge Paradise Woods for the lead. Shooting to the front from there, she was a bit wayward late, but the wire came in time as Abel Tasman closed well from second-last. Paradise Woods held for third.

“The whole key was I wanted to save ground on the first turn and I was able to do that,” said winning rider John Velazquez. “I got her in a comfortable position where I thought she was going well. At the three-eighths pole I followed Jose Ortiz's horse [Elate] and all of a sudden she stopped and I had to go a little sooner than I wanted to. I got to the lead a little too soon for me but, I mean, it was perfect.”

Trainer Bob Baffert was proud of the runner-up effort of Abel Tasman.

“Down the backside I was a little bit worried, but down the stretch she tried hard and she ran her race,” Baffert said. “She just got beat by a really good filly today. Dallas Stewart had her ready today and in the paddock, the winner looked like the horse to beat. We're so proud of our mare. She gave us the biggest thrill winning the Kentucky Oaks and she showed up again today but just came up a little bit short. She ran her heart out but just came up second. Sometimes second is good.”

Jose Ortiz, who finished fourth aboard Elate, said of the beaten favorite, “It was a good race for her. She broke well and we got a good position. She went well all the way around there. But when it came time in the stretch, it just wasn't there. She ran out of gas. But she's only a 3-year-old and she'll come back next year and be even better.”

Stellar Wind (Curlin), the 3-1 second choice in the Distaff, bobbled at the break, but recovered to chase the early pacesetters. In tight quarters nearing the stretch, she was forced to steady slightly before retreating to last.

“We were in a good spot,” jockey Victor Espinoza said of Stellar Wind. “But, today just wasn't her day.”

“She had an injury, not a bad injury, after the last Breeders' Cup, and we did surgery on her,” Stewart said of the long layoff. “Chuck could have retired her. She was already a Grade I winner, but it wasn't severe, and Chuck said, 'I want to keep going with her, and he did. A lot of people–I mean, nine out of 10 guys, I think, would have retired her. But Chuck, being the guy he is, a sportsman and loves racing, and wanted to see this happen for her, and he did it.”

Dallas Stewart purchased Lemons Forever for $140,000 as Keeneland September Yearling and trained and co-owned the 47-1 2006 GI Kentucky Oaks upsetter with Willis Horton. Charles Fipke purchased the mare for $2.5 million at the 2007 Keeneland November sale. Her third foal is 2014 GI Ballerina S. winner Unbridled Forever. She produced a filly by Medaglia d'Oro in 2016 and, with no foal reported in 2017, she was bred back to that stallion.

“The night I bought [Lemons Forever] was the night I actually met Dallas,” Fipke said. “The thing is I had looked at all of the mares, and I always like to buy the best-conformed mare, and the best-conformed mare in the whole place was Lemons Forever, who had won the Kentucky Oaks. And just before she sold, they showed a picture of her winning the Kentucky Oaks, and she won by a big margin. I thought to myself, this is going to be expensive. And it was.”

Unbridled Forever produced a colt by Medaglia d'Oro this year and was also bred back to the Darley stallion.