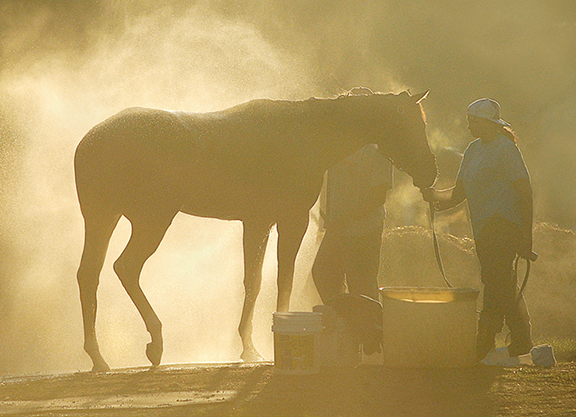 Thoroughbred trainers who rely on legal foreign workers for hands-on, day-to-day horse care will have to brace for difficulty in finding qualified help, the prospect of higher labor costs, or even having to reduce the number of horses in their stables.

That's because a federal funding bill filed late Dec. 6 now appears imminent to get passed on Thursday or Friday without a last-ditch amendment to re-introduce exemptions for “returning workers” who are in America lawfully under H-2B visa status.

“If you start to lose staff, you could start to lose four horses for every one [lost worker],” said Eric Hamelback, chief executive officer for the National Horsemen's Benevolent and Protective Association. “And that's just grooming. It doesn't really take into account an exercise rider and/or a hotwalker. It could ultimately lead to a financial issue for a trainer in that his stable could have to be reduced. To me, that's the ultimate consequence.”

In just the past 10 weeks, the reinstatement of the H-2B visa exemption has gone from a non-issue to a potentially big headache for anyone who makes hiring decisions in a racetrack or training-center backstretch setting. To understand what might happen moving forward, it's helpful to first recap how the dilemma reached its current state:

For many years, United States law has capped at 66,000 the total number of foreign nationals who can be issued an H-2B visa during a fiscal year for the purpose of coming into the country to work for up to 10 months (they then must return to their home countries for the other two months).

However, at the same time, a long-standing exemption has also been on the books stating that if employers are able to demonstrate that a worker has qualified for the H-2B program in any of the three previous years, that worker does not count against the 66,000 federal cap.

The need for this H-2B exemption is not limited to the Thoroughbred industry. It affects numerous other industries in which hard labor and low pay deter American citizens from wanting to take those jobs.

“It was a 'clean' CR as they call it in Washington, which meant it had very few riders,” said National Thoroughbred Racing Association (NTRA) president Alex Waldrop. “[This] confirmed out fear that this is going to be a very unusual lame-duck session in that very little [special] legislation would be in there, not just ours. So we weren't singled out here, and that's important for people to understand.”

On Wednesday the CR bill (HR 2028) was forwarded to the House Committee on Rules, where as of deadline for this story, it remained open to amendment. In separate phone interviews on Wednesday, both Hamelback and Waldrop used the term “last-ditch” to describe the likelihood that the H-2B exemption would be added back in.

“It's unlikely to succeed because in these situations leadership controls the rules committee, and [that same] leadership controlled the contents of the CR,” Waldrop said. “It's pretty much the end of the road right now, which really means there is nothing that can be done between now and late April at the earliest.”

Numerous published reports out of Washington cite Thursday as the likeliest vote on passage by the House, with affirmation by the Senate expected by Friday.

So assuming passage of the CR without the inclusion of the H-2B exemption language, the chief short-term issue now becomes, what should trainers do to mitigate immediate hiring difficulties? In the longer term, the big question is, what can the Thoroughbred industry do to shape backstretch foreign-worker policies moving forward?

“So this is purely a challenge for horse trainers,” Waldrop said. “They can continue to use the H-2B program. They are just going to be using it subject to the 66,000 visa cap. They need to be proactive in putting in their applications for H-2B workers as soon as possible. They cannot delay, because there will be extraordinary competition [from other industries] for that limited number of H-2B workers.”

In a different interview earlier in the week, Waldrop said that he did not think the loss of the H-2B exemption would trigger federal backstretch raids targeting illegal employees, but “it will deplete or dry up the H-2B program for trainers who want to be in compliance with the law, and they're going to be forced into the very bad decision to either hire undocumented workers or not have the staff to handle the horses.”

The uncertainties associated with the change of U.S. presidential administration also play a role in shaping future policies, Waldrop said, adding that the NTRA will continue to work with colleagues and allies on Capitol Hill to seek a long-term solution.

Hamelback said the industry must hammer home the key point to lawmakers “that this is a legal operation, and that the racing industry really needs to have a functioning guest worker program.”

Hamelback continued: “I think our best course going forward is to really look for a legislator or representative who can help champion this cause with us, [a person] who can and does understand the industry and our needs, and can help put a piece of legislation in place so we don't have to constantly be on an extender; a true piece of legislation that can resolve this going forward.”

Hamelback said he also saw promise in uniting with other industries that reap the benefits of an active H-2B exemption program.

“Unfortunately, a lot of times our industry is reactionary instead of being proactive,” Hamelback said. “I'm hoping to do that a little bit better going forward because there are so many other industries that rely on large migrant-worker programs, whether it's restaurants, casinos, hotels, et cetera. I truly feel that there are other industries that can help support and back and push something like this.”

Hamelback said he bases the backstretch laborer-to-horse ratio on the basis of needing one groom to care for every four Thoroughbreds, or even one groom for every five if an outfit is stretched thin for manpower.

For the average trainer who relies on legal foreign workers, not having the H-2B exemption in effect “means an increased overall payroll budget [and] a shortage of staff, which could then lead to a shortage of horses that could be in that stable,” Hamelback said. [email protected]