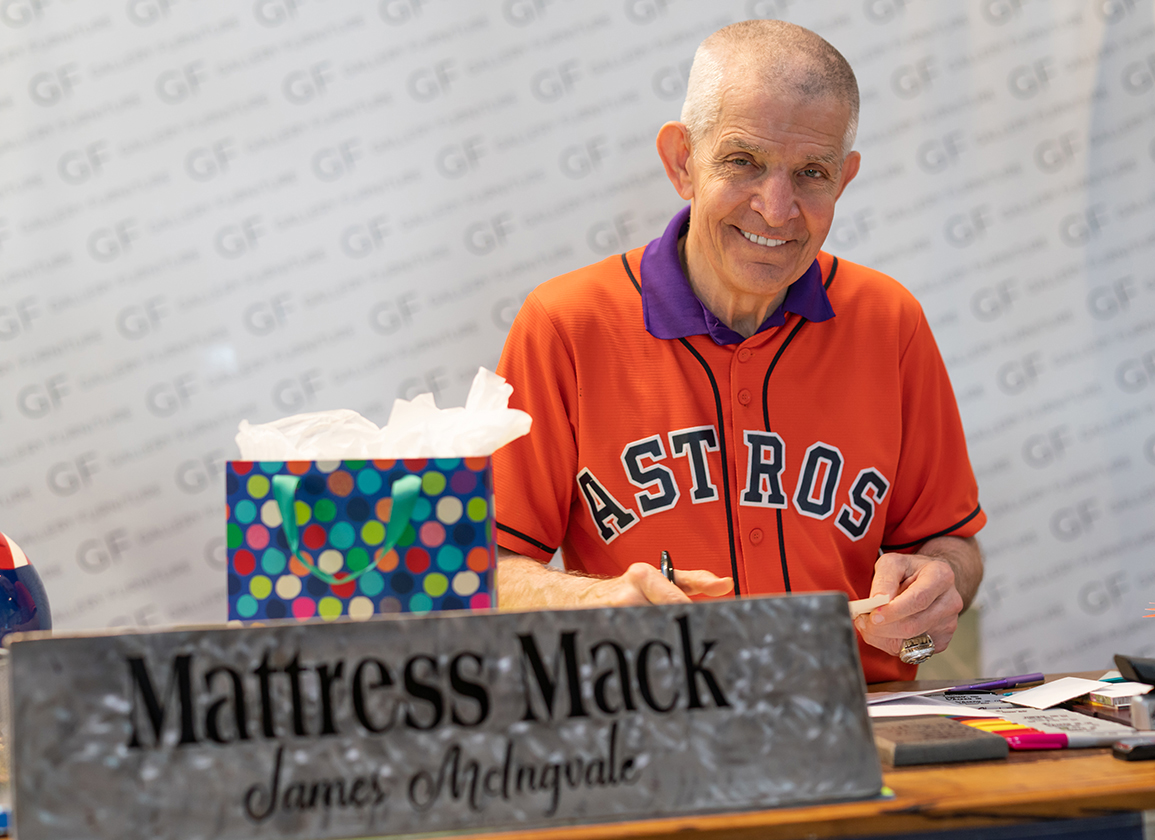 Horse owner and master promoter Jim “Mattress Mack” McIngvale is no stranger to making big sports bets, but never anything like this. If his beloved Houston Astros win the World Series, McIngvale will make $35.6 million off of a series of bets he made in June. It would be the largest winning wager ever in U.S. sports betting history.

McIngvale often combines his wagers with promotions at his Gallery Furniture Stores in Houston. Earlier this year, he promised his customers that any mattress they bought worth $3,000 or more would be free if the favorite won the GI Kentucky Derby. McIngvale hedged, wagering $2.4 million to win on 5-2 favorite Essential Quality (Tapit), who finished fourth. A winning bet would have been worth a profit of just less than $7 million, which would have more than covered the amount he lost giving away free mattresses. A loss by Essential Quality still meant that he sold thousands of mattresses he otherwise would not have sold. Either way, McIngvale would come out a winner.

In February, McIngvale won $2.72 million on a Super Bowl wager in which he bet $3.46 million on Tom Brady and the Tampa Bay Buccaneers to cover the 3.5 point spread. It was the single largest legal wager placed on the game.

The latest promotion follows the same blueprint as the Derby wager. An Astros World Series win would mean that anyone buying a mattress during the promotional period would get it for free. Prior to the American League Championship Series, McIngvale estimated that having to give away the mattresses would cost him $20 million. It looks like that number has gone up.

When reached Saturday, a day after the Astros advanced to the World Series with a win over the Boston Red Sox, McIngvale said his store was being overrun by customers looking to take advantage of the promotion.

Believing that the promotion would prove to be a huge success, McIngvale made his wagers on June 10, when the Astros were still considered one of many teams with a good shot at going all the way. He bet $2 million that the Astros would win the World Series with William Hill at odds of 10-1 and another $1 million at 10-1 with Fanduel. He also made two smaller wagers at outlets that gave him 16-1. In total, he bet $3.2 million on the Astros.

The Astros are now an odds-on favorite to win their first World Series since 2017.

“I like to gamble,” McIngvale said. “I gamble big all the time. It's a promotion and it's a hedge. My heart and soul are with the Houston Astros, and, just as with Runhappy, I'm all in.”

For a while, it looked like McIngvale had backed a loser. The Astros fell behind, 2-1, in the series with Boston and their starting pitching was a mess. Many a pundit had already given the series to the Red Sox. Instead, the Astros rallied to win the next three games to close out the series and advance.

“I was not worried,” McIngvale said. “After they got beat Monday night, I was in Boston having a good time and saw some of the players that I know and they were upbeat and positive. I knew that sooner or later every batter on the Red Sox would stop hitting. 500. I knew there would be a statistical swing and things sure swung the Astros way over the last three games.”

Having a potential World Series winner at 10-1 means that McIngavle could “save” and bet some amount to win on the National League team. By doing so, he could lock in a guaranteed profit. It's not going to happen.

“I would consider that treason,” he said. “I would never do that to my boys. I wouldn't do that in a thousand years.”

With so many customers buying mattresses on Saturday, it was difficult for McIngvale to do the math. He knows he will make $35.6 million if the Astros win, but there was no telling how much he would lose giving away so many mattresses. That didn't matter with him. Not only is his heart with his hometown, he wants nothing more than to reward his customers with free mattresses.