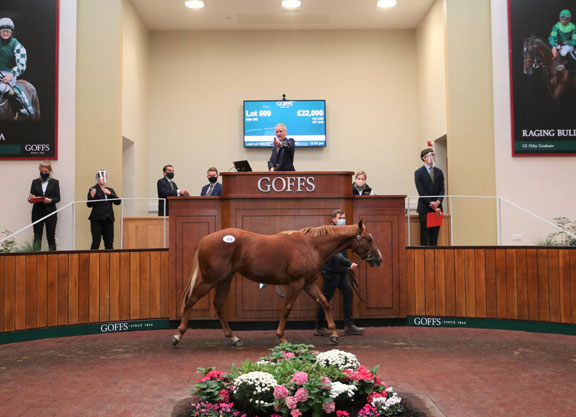 The Goffs Sportsman's Yearling Sale got underway in its temporary new guise in Doncaster on Thursday, with a colt by Footstepsinthesand (GB) (lot 647) from Rockfield Farm topping trade with a bid of £50,000 from Kevin Ryan. He is the second foal out of the winning Danehill Dancer (Ire) mare Harpist (Ire) and his year-older full-brother Star Of Orion (Ire) won on debut at Newmarket in June for Ralph Beckett.

As was the case with the Tattersalls Ireland September Yearling Sale earlier this week and as will be the case with Goffs Orby next week, the Sportsman's sale, typically staged in Kildare, was moved to Britain to maximize buyer attendance. A significant number of Irish-based vendors opted to withdraw their yearlings and instead offer them in the Goffs Autumn Yearling Sale in November, and as such just 70% of the yearlings catalogued on Thursday (144) visited the ring, with 99 sold at the close of trade for a clearance rate of 69%. The aggregate was £1,369,000, the average £13,828 and the median £10,000.

Leading first-crop sire Mehmas (Ire) was predictably popular, and he had a colt and a filly sell for £47,000 and £44,000, respectively. The colt (lot 570) was from Kilmoney Cottage Stud and is a half-sister to the French listed winner Just Sherry (Ire) (Intense Focus), their dam being a half-sister to the G1 2000 Guineas and G1 St James's Palace S. winner Cockney Rebel (Ire) (Val Royal {Fr}). He was bought by BBA Ireland.

The Mehmas filly (lot 609) was from Grange Hill Stud and was scooped up by trainer Eddie Lynam. She is the third foal out of her dam Faddwa (Ire) (Arcano {Ire}), who is a half-sister to the listed-winning Heart Of Fire (Ire) (Mujadil). Her year-older full-brother Fools Rush In (Ire) is one of 32 winners for Mehmas thus far.

The Goffs Sportsman's Sale continues with its second and final session from 10 a.m. on Friday.