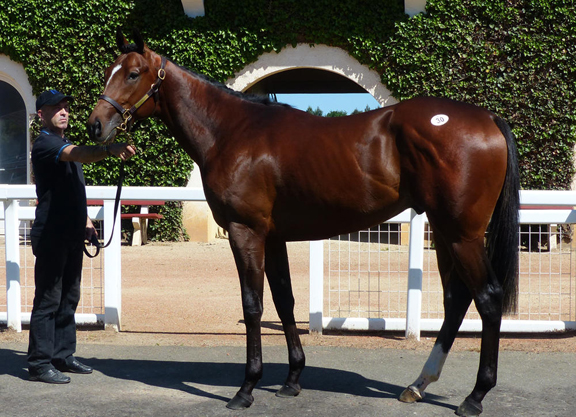 The sale-topping colt by Intello | Osarus

A delayed and disrupted breeze-up season finally got underway in France on Wednesday with Osarus staging the first thoroughbred auction to be conducted entirely online in Europe.

From an original catalogue of 79 juveniles, 21 had been withdrawn prior to the sale, but Osarus received 10 supplementary lots which had been rerouted from the cancelled BBAG sale in Germany. The turnover of €509,500 was almost exactly half of previous year's tally but that was derived from 15 fewer horses being sold—32 in total from 63 offered. The average price dropped from €22,600 to €17,222 and the median was down to €9,000 from €16,000.

The Osarus breeze-up is traditionally a much more domestic affair than Arqana's international equivalent, and all bar two of the horses offered had been prepared in France. The buyers' list featured some names from Britain, however, including syndicator Nick Bradley and dual-purpose trainer Donald McCain, as well as Newmarket-based Gazeley Stud.

At the head of proceedings was the Yann Creff-consigned Intello (Ger) colt (lot 30) out of the listed-placed Galaxie Des Sables (Fr) (Marchand De Sable), who knocked down at €58,000 to Marc-Antoine Berghgracht of MAB Agency. The agent later divulged that the colt is for Ligue 1 footballer M'Baye Niang, who plays for Rennes and his home nation of Senegal. Niang currently has three horses in training in France, including recent 2-year-old winner Swetty Beauty (Fr) (Stormy River {Fr}).

“Fortunately confinement ended in time for me to be able to go out to see some horses,” said Berghgracht. “There's no way I would want to buy a horse without seeing him first. I bought him for a new client of Frederic Rossi, who trains in Marseille. M'Baye Niang is new in the game. He had a winner recently and he loves racing and wanted to invest again in another horse. He loves his horses and regularly goes to see them in training.”

Sold as lot 5, Antolya (Fr), a son of Prince Gibraltar (Fr) and the Cadeaux Genereux (GB) mare Amber Two (GB), was bred by Patrick Chedeville and offered for sale by Ecurie Prevost-Baratte. Chedeville's Haras de Petit Tellier is also the home of the former Australian-based stallion Elvstroem, whose 3-year-old daughter My Love's Passion was runner-up in last year's G2 Prix Robert Papin for Yann Barberot and may yet take her chance in France's first fillies' Classic of the season on Monday after finishing third in the G3 Prix Texanita on May 13.

The leading vendor of the day was Larissa Kneip's Haras de Saint Arnoult, which sold nine 2-year-olds, including two to Michel Zerolo's Oceanic Bloodstock on behalf of Jeremy Para for €36,000 each. The duo will be trained by Fabrice Vermeulen and consisted of a Sea The Moon (Ger) colt out of the winning Cape Blanco mare (Ire) Casablanca (Ire) (lot 14b) and a filly by Wootton Bassett (GB) (lot 73) whose listed-placed dam Symba's Dream (Vindication) has already produced Italian listed winner La Gommeuse (Ire) (Zamindar).

Kneip was full of praise for Osarus for being able to stage the sale in challenging circumstances. She said, “I take my hat off to Osarus. I was in contact with them regularly because we had horses here to sell for clients. If they had just been my own it wouldn't have been so difficult because I am a trainer as well and I could have just kept them in training. But I had horses for clients and they wanted to sell them.”

Kneip continued, “The horses have been here for much longer time than they usually have to be because of course this sale should have been at the beginning of April. As we didn't know what would be happening we've trained them like racehorses rather than breeze-up horses because we didn't really know if there would be a sale at all.

“That was a good discussion between Osarus and the vendors and we came up with this kind of idea. I think this was better than having no sale. There has been quite a bit of interest in my horses. I'm not saying that I made great money but people paid what they worth and at least we had the opportunity to sell them.

“I have a very good relationship with Jeremy Para and he bought Fantastic Spirit (Fr) from us, who won the Derby du Midi in Bordeaux last week and will be running in the Prix du Jockey Club.”

Reflecting on his day at the rostrum as the sole auctioneer for the online auction, Emmanuel Viaud, the managing director of Osarus said, “I'm very happy to have seen a lot of buyers involved like Jean-Claude Rouget, Michel Zerolo, Guy Petit and Nicolas de Watrigant. Of course the Normandy consignors like Larissa Kneip and Philippe Prevost-Baratte are well known by the buyers and that makes it much easier.”

He added, “I've had some feedback from some bloodstock agents and they said they felt it looked professional and was easy to deal with if you wanted to place a bid. For us it is a success. It's not a big sale, it would not be the best breeze-up sale of the year, I know that, but it's a new concept and we had to do it this way otherwise we would have had to cancel the sale. So I am happy with the results.”

Viaud concluded, “We had to register the buyers if they wanted to bid online and two weeks ago I didn't know if I would have five people or ten people, but actually we had more than 100 people registered today and others buying on the phone. I'm not happy that we've taken €500,000 less than last year, of course not, but as we have seen over the last two months, everything has been stopped, and for us it is at least positive to have been able to hold this sale today.”