Fog of War: The New War Front in Town 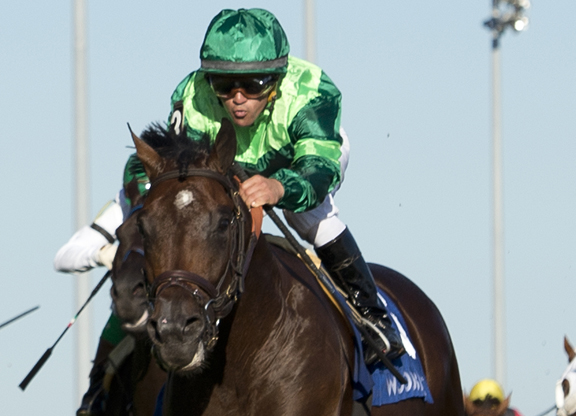 The town of Stillwater, New York, just outside Saratoga Springs, is often called the 'turning point of the American Revolution.' It was there that one of the critical battles in the Battle of Saratoga was won and so it is fitting that the new stallion in town, standing at Barry Ostrager's Questroyal North, is Fog of War (War Front–Say {Ire}, Galileo {Ire}). This son of War Front and winner of the GI Summer Stakes at Woodbine at two will stand as the property of Peter Brant's White Birch Farm Inc. and Three C Stables, LLC with a stud fee set at $7,000 LFSN.

A $400,000 Keeneland September yearling, Fog of War was purchased by White Birch Farm and raced for his entire career with Chad Brown in Brant's colors.

“Fog of War has been a horse we've been following since early on in his career,” said Christopher Bernhard, general manager at Questroyal and advisor to Three C Stables. “He was a maiden special weight winner here in Saratoga and shipped up to Woodbine for a second start [in the GI Summer S.] and looked pretty hopeless at the top of the stretch. Ultimately, he got free and got ahead of Preakness winner War of Will (War Front) at the wire. He won by about a length and a half. Just to have all that traffic in just his second race and then when he finally got free, he just kind of shook loose. He probably would have been one of the favorites for the Breeders' Cup that year if he didn't come out of the race with some sore shins. And, so they put him away for a little while.”

Brant, speaking to the TDN on Nov. 17, said he was impressed with Fog of War's two-year-old season as well.

“Fog of War's win first time out at Saratoga and his Grade I victory in the “Win and You're In” Summer S. at Woodbine beating War of Will showed us that he was our best colt of that crop and marked him as one of the clear favorites for the 2018 Breeders' Cup Juvenile Turf,” said Brant. “Unfortunately, Fog bucked his shins and would not make the race but his undefeated 2-year-old campaign managed to show everyone his brilliant turn of foot and class.”

Said Bernhard, “Fog of War, to me, is probably the nicest pedigree of any horse that's come to the state. War Front has established himself as a very good sire of sires at this point. His son Declaration of War had a Breeders' Cup winner with Fire at Will. The Factor has also had numerous Grade I stakes horses. War Front also has several young sons that are at stud now like Omaha Beach who was an incredibly popular horse last year. And, then Claiborne Farm will be standing War of Will for his first season this coming breeding season.”

“Fog of War's, dam, Say, was a Group Stakes winner, Group 1 Stakes-placed over in Europe,” Bernhard continued. “She had three foals of racing age. All three of them are stakes winners by War Front. The second dam was an incredible race filly here named Riskaverse, who made a little over $2 million dollars and danced every dance here. She was a $5 million broodmare prospect. The female family includes Havre de Grace, who was a $10 million broodmare prospect several years ago and sold to Mandy Pope. And Toll Fee, the third dam, is a brilliant female family with countless number of Group and Graded stakes winners.”

Chris Larsen, founder of Three C Stables, named for himself, his wife Colleen and his son Conner, became interested in horse racing after a serious motorcycle accident. He invested with West Point Thoroughbreds

“I was lucky enough to start off as a partner in Saratoga Russell (Trippi) and Justwhistledixie (Dixie Union),” said Larsen. “They were both outstanding runners and it was great working with West Point and Terry Finley.”

When Larsen decided try his hand at breeding racehorses, he started with the fillies then racing with West Point.

“Instead of selling them all at auction, we would have them appraised and I would decide whether or not to buy them. For instance, I bought and still have Fitz Just Right,” said Larsen. “I enjoy the idea of trying to create something. When you breed a horse that goes on to win a race, it puts you on top of the world.”

Larsen met Bernhard a decade or so ago when he was looking for someone to oversee his mares and advise him on breeding decisions.

“I've been doing this for close to a decade with Chris's help,” said Larsen. “He has been looking for a stallion prospect for New York and when he mentioned Fog of War, I was like 'that's the horse.'”

“I am huge believer in the Galileo mare and you can't take anything away from War Front,” said Larsen. “You have two great sire lines in Fog of War. He could be the horse that really carries on the Danzig line. I feel that strongly about him. I like him so much I decided to invest a lot more in mares and become more of a commercial breeder.”

“It was made even better when we found out we could partner with Peter,” said Larsen. “It's the right horse with the right guy, with the right partner, and he's got the right support. I'm really looking forward to it.”

In speaking to the TDN in November, Larsen added: “This will give breeders access to the world's most successful sire lines… as well as taking advantage of the lucrative New York State breeder awards and restricted racing programs. We think Fog of War is destined to be New York State's great sire.”

Adjusting to life on the farm at Questroyal seems to be no problem for Fog of War.

“I've been really impressed with the way Fog of War has handled coming in off of the racetrack,” said Bernhard. “You know, we've had quite a few showings and he's come right into the breeding shed, stands up like he's been doing this his whole life.”

“He has been a sweetheart to be around in the stall. I picked him up a Jollyball so he can throw that at me every day. And he's just been a complete gentleman. We're really excited to get him turned out in big field and let him do his thing and the breeding shed will open in a few weeks.”

“I'm going to say at this point we've got seventy-five in-house mares that are going to Fog of War,” said Bernhard. “When we were able to negotiate a deal with Mr. Brant, who's also going to be sending a significant number of mares from Kentucky to breed to him, we went to Keeneland and Mr. Larsen bought 31 mares at the Keeneland November sale specifically for the horse. I don't believe there's been a horse that's had that opportunity right off the racetrack with that volume of in-house horses.”

“Fog of War has all the makings of a potentially high-class stallion with his conformation, pedigree and speed,” said Brant in November. “I am so thrilled Fog will have the opportunity to be an exciting freshman stallion in New York and also allow White Birch Farm to be a new player in the New York State breeding and racing program.”